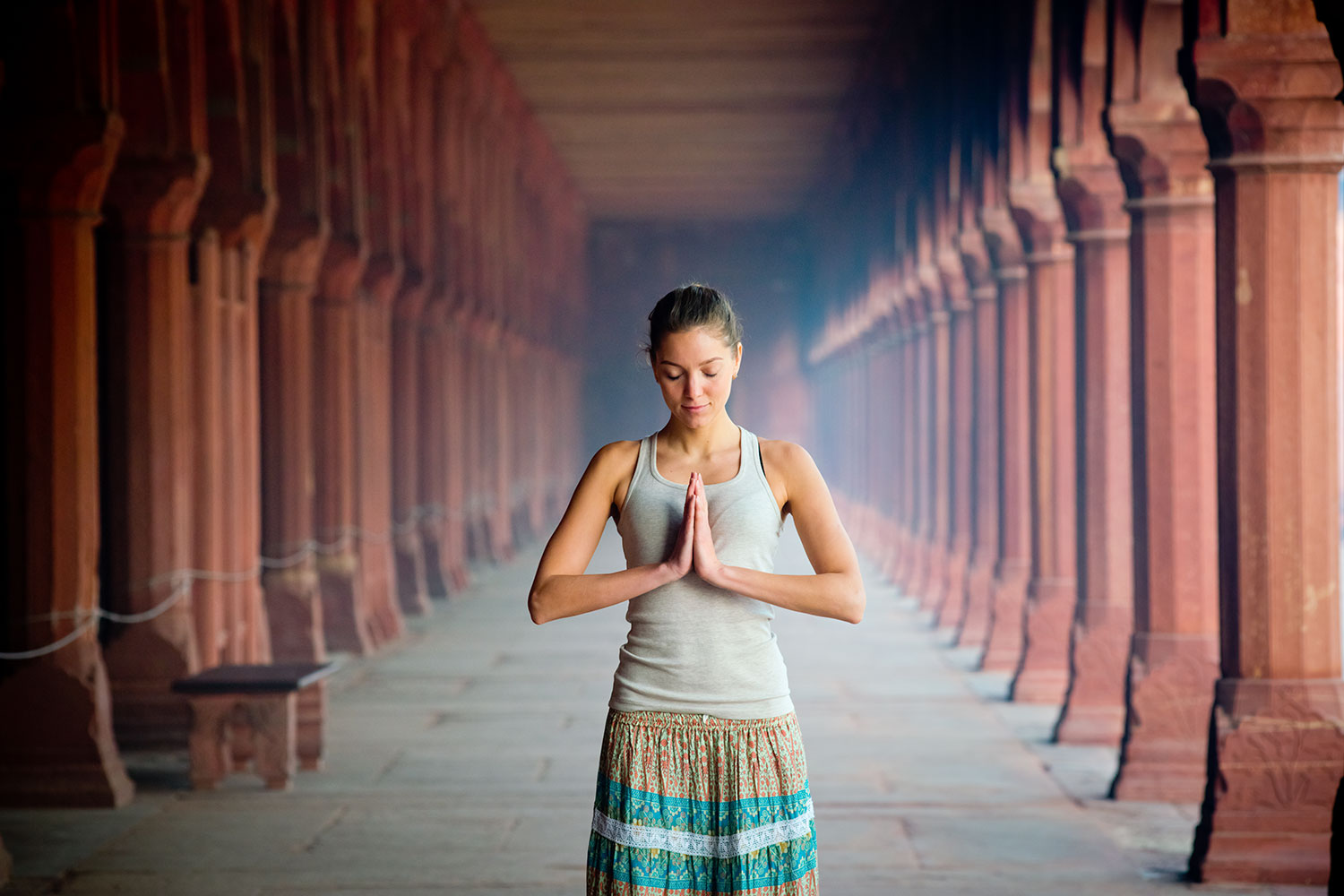 A 30-Minute Practice to Calm the Nervous System

As a dedicated yogi, you are undoubtedly familiar with the words namaste and aum—they are both staples of western yoga classes, and you’ve likely heard them repeated hundreds of times. However, how much do you actually know about the history and true meaning of these words? While many of us have a surface familiarity with namaste and aum, we may not have taken the time to delve into the deeper roots of the words. Both symbols have rich layers and histories, and developing an understanding of them can help you delve deeper into your spiritual practice.

Namaste is a Sanskrit greeting and farewell that can be used amongst friends and strangers alike. While the greeting is commonly used, it has a weighty spiritual significance unlike any standard Western salutation. It is used within the Hindu custom, and is most popularly found in India, although it is present in other areas of southeast Asia where Hinduism is less common.

Namaste can be broken down into two pieces. Namas means either “bowing” or “obeisance,” while te means “you.” Putting those two together, the word can roughly be translated to “I bow to you.” Namah can also be translated to mean “not me,” reflecting the idea that, when said to another person, we are surrendering our ego in their presence and seeing them as an equal.

That being said, a lot of meanings and phrases have been attributed to the word, particularly in yoga classes. As a student of yoga, some of the common explanations you may have heard include:

“I honor the spirit in you that is also in me.”

“The divine self is the same in you and me.”

Many phrases can be used to define namaste, but it ultimately is a greeting of love and respect between two people. It represents the connection held between them, and an acknowledgment of the similarity of their souls, regardless of any differences that may be viewed as divisions between them. It honors the divine life force present in the person they are greeting, without ego getting in the way.

The anjali mudra accompanies the verbalization of namaste. The gesture is performed by placing your palms together at your chest, with the edges of your thumbs pressing into your sternum. The eyes should be closed, as this allows you to turn your focus inwards to recognize yourself and the soul you are greeting, and turn off any distractions in the environment around you. The chin should also be slightly tucked down towards your chest. When done in combination with namaste, it recognizes the life force that resides within everyone with whom we connect.

While you may be familiar with doing this gesture along with the verbalization of namaste in yoga class, it doesn’t always have to be said aloud. In India, the anjali mudra gesture itself encompasses the meaning of namaste, and therefore the word doesn’t have to be spoken.

When Namaste is Used

In Western culture, the use of namaste is typically limited to yoga and meditation classes. In Indian culture, however, it is more commonly used as a greeting for day to day life, in both casual and formal settings. It is a salutation that can be used between all types of relationships: both strangers and the closest of friends can use it, and it can be said between an elder and a young person, or peers on the same level. In addition to being used as a greeting and farewell, it may also be used as a method to seek forgiveness from another person after a wrongdoing.

Within western yoga and meditation classes, namaste will typically be practiced at the end of class. Most commonly, teachers will initiate the salutation, showing gratitude to their students, and students will reflect it back to them.

The introduction of yoga to the western world has been the catalyst behind the appearance of namaste in this culture. However, in its most traditional roots, namaste is viewed more as a spiritual greeting between two people, rather than a part of an individual’s yoga practice.

The Meaning of Aum

Aum (or Om) is a bit more complex than namaste. Its meaning is connected to not only the word, but the sound made when verbalizing it. In Hinduism, aum is believed to have been brought into existence by Brahma, the creator, and it is considered to be the most sacred sound as the representation of infinite energy of divinity. The sound and vibration of aum was the catalyst for everything in the universe coming to existence, and when chanted, you are connecting to the original vibrations that sounded when the world was created.

Aum is explained as follows in the Mandukya Upanishad:

Om is the one eternal syllable of which all that exists is but the development. The past, the present, and the future are all included in this one sound, and all that exists beyond the three forms of time is also implied in it.

The letters in aum each carry significance. The A represents creation, the U represents preservation, and the M represents destruction. Together, they represent the Trinity of God in Hinduism: Brahma, Vishnu, and Shiva. As such, the word and sound of aum encompasses the entire cycle of the universe. Additionally, the letters are said to symbolize different aspects of life. A symbolizes speech, or vak. U symbolizes the mind, or manas. M symbolizes the breath of life, known as prana.

While aum first came to existence through the Vedic tradition of Hinduism, it is also considered to be a holy symbol in Buddhism, Sikhism, Jainism, and other new religious movements. Buddhism emerged from Hinduism and continued the tradition of the aum symbol, but it is more commonly referred to as om.

The symbol associated with aum is formed with three curves, a semicircle, and a dot, each of which possess a certain meaning. Each part of the symbol is representative of a person and their potential.

The large bottom curve on the left hand side of the symbol is representative of the waking state and consciousness. The smaller curve above it represents the unconscious state, which is hidden from one’s consciousness. We are less aware of this portion of self, but it is equally as important in creating the entire being. The third curve, which extends from the center of the two others, is representative of the dream state, and serves to connect the conscious and unconscious states, allowing them to interact.

The Pronunciation and Use of Aum

The sound of aum is said to have four parts when properly practiced. The A sound starts in the navel or abdomen, which is representative of creation, and emerges from the back of the throat. The U originates from the middle of the vocal region, vibrating in the chest to represent preservation, and rolls over the tongue. The M sound ends on the lips and vibrates in the head, which is associated with sacrifice and destruction. Aum is finished with the final sound in the four parts: silence.

Aum is most often used as a mantra, chanted repeatedly. Traditionally in India, it is sounded three times. This has been explained as a way to bring about blessings in the three universes (physical, astral, and causal), and also as a way to remember the three parts of aum.

The purpose of the chant is to deepen the consciousness of the person practicing it, bringing them to another state of awareness. The goal is for the practitioner to become a part of the vibration they are emitting, and to feel the universe within themself.

By expanding your understanding of aum and namaste, you are able to strengthen your spiritual practice both on and off the mat. These complex and rich symbols provide an excellent look into the meaning behind the spiritual practice, and are wonderful reminders of our connection with the universe around us.

Yoga Poses We Love for Comba...