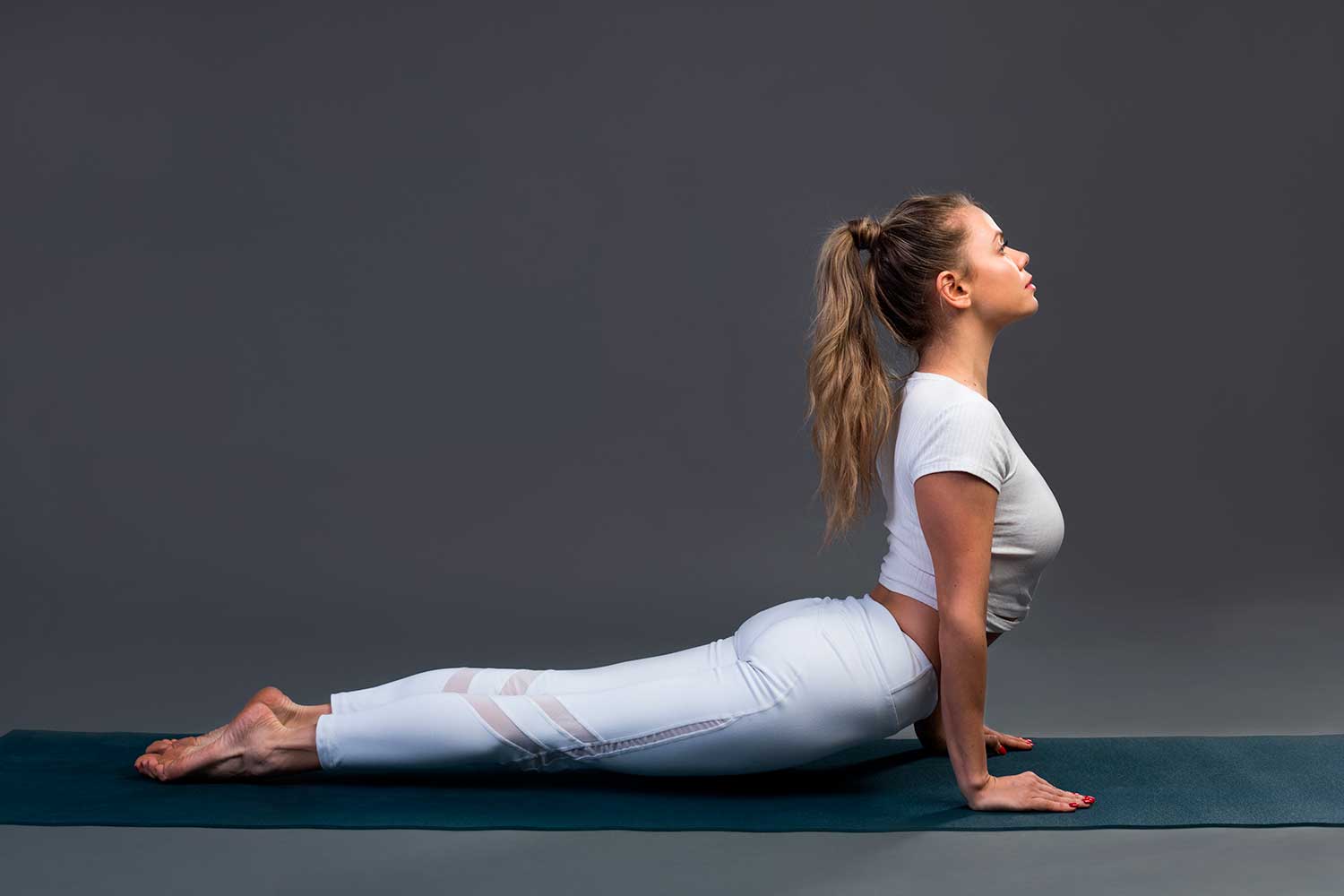 Yoga can have empowering emotional and spiritual effects. These more esoteric benefits are, however, closely interwoven with the physical effects of yoga. Yoga is a powerful tool at balancing the nervous system. Unlike other forms of exercise, yoga integrates physical poses, meditation, and breath. Yoga is not just a physical practice, and this is what makes it a unique way to calm the nervous system.  Many people come to yoga for stress and anxiety relief, as well as healing for other health problems such as irritable bowel syndrome, depression, migraines, and so much more that are ultimately linked to the nervous system. The nervous system itself, and the ways that yoga interacts with the nervous system are complex and multivariable, and deserve further discussion.

Yoga and the Nervous System

Accept with an unruffled mind whatever comes. Paramahansa Yogananda

Slow, deep breaths such as the yogic ujjayi breath, activate nerve receptors in the diaphragm. This in turn activates the parasympathetic nervous system, thereby reducing the stress response of the sympathetic nervous system. Because yoga interlinks breath with movement, and places such a big emphasis on breathing, it is no surprise that it is a powerful tool in calming the nervous system.  Multiple studies have shown that yoga can calm and rebalance the nervous system by other various mechanisms. These include changing the body’s perception of stress, increasing heart rate variability, increasing pain tolerance, lowering blood pressure, and more.

Types of Yoga to Calm the Nervous System

Yin yoga is a very slow moving and restorative style of yoga. It is usually taught as a series of passive postures, almost all of which are done on the floor or supine. Postures are held for long periods of time so as to target the deep muscles and fascia. One class may only cover five poses, because each pose is held for so long. Because it is such a slow style of yoga, there is an emphasis on the breath and cultivating mindfulness. As such, it is one of the best styles of yoga to calm the sympathetic nervous system.

Breathing is not necessarily a style of yoga, per se, but it is hugely important to a holistic yoga practice and is worthy of being practiced on its own. Yogic breathing is known as pranayama in Sanskrit and is the fourth limb of yoga. According to the yogic sage, Patanjali, there are eight limbs of yoga that are equally important. Although the physical poses, or asanas, which make up the third limb of yoga, are often emphasized in the West, pranayama deserves just as much focus.

Breathing is unique because it is part of the autonomic nervous system, or in other words happens automatically, yet we still have voluntary control over the breath when we choose. As such, breath can actually be used to control and influence the autonomic nervous system. Specific pranayama techniques, such as nadi shodhana, or alternate nostril breathing, may be particularly calming.

Meditation, or dhyana, is the seventh limb of yoga. Just like the physical postures (asanas) and breathing techniques (pranayama), meditation deserves equal focus. Meditation involves sitting in contemplation, emptying the mind of all thoughts, until stillness of the mind is reached. Meditation has been practiced for eons, but recently scientific research has come out in support of its benefits. Particularly, research shows that meditation is clinically proven to relax the nervous system by lowering the body’s stress response, balancing stress hormones such as cortisol and adrenaline, and more.

Yoga nidra actually means “sleep yoga,” but it is much more than just sleeping. In yoga nidra, the yogi reaches a deep state of meditation, similar to savasana which is often practiced at the end of a yoga class. Yoga nidra is sometimes compared to hypnosis, but the yogi is aware the entire time. When fully immersed in yoga nidra, the parasympathetic nervous system must take over. For many people with overactive stress responses and sympathetic nervous systems, this can help rebalance them and restore calm within the body.

A Sequence to Calm the Nervous System

The following is a short sequence to calm the nervous system. It focuses on relaxing, accessible, and restorative postures. As you flow through these asanas, be sure to focus on your breath. If your breath becomes haggard or challenged, this is a sign that you should bow out of the pose and opt for something more restorative for your body instead. Honor your own personal edge and in doing so you will help restore balance to the autonomic nervous system.

Begin your practice by focusing on unifying the breath and body. Sit in easy pose (sukhasana), by sitting cross legged on your mat. Your palms should be placed down on your knees, giving you a sense of grounding your body.

From your final sun salutation, find yourself in downward facing dog. Inhale here, and then exhale and bend the knees deeply until they come all the way to the mat. Sit the bottom back on the heels and keep the arms extended out in front. This is child’s pose. Let your forehead ground into the mat, steadying your energy. Breathe deeply here for 5-10 breath counts.

From child’s pose, inhale and sit up on your heels, using your hands to help you. Exhale and extend the legs straight out in front. Inhale and reach the arms up and overhead. Exhale and extend the arms and torso forward over your legs, hinging from the hips rather than rounding the spine. This is seated forward bend, or paschimottanasana, a very centering restorative posture. Breathe here for 5-10 breaths, feeling the backs of your legs release.

From seated forward fold, inhale and use your hands to help you back up to sitting. Exhale and slowly lie back on your mat. Here, inhale and hug your knees into the chest, bringing your arms straight out to either side. Exhale the knees to the right, and the gaze to the left. Hold here for a few breaths, before repeating on the other side. Continue a few cycles of supine twist on each side, letting yourself relax into the pose, release the low belly muscles, and twist out your organs.

From supine twist, inhale the knees back to center. Bring your arms down along your sides. Slowly extend the legs straight up, roll the shoulder blades under you, and use the hands to help support the low back as you lift the feet toward the ceiling. When you are in full posture, the hands support the low back and the body is extended in one strong, straight line. Shoulder stand is referred to by Patanjali as the “mother of all postures” for its many healing benefits. By reversing the flow of lymphatic and blood flow in the body, it is a rejuvenating posture for many internal organs. It is wonderful for digestion. By activating these organs, the pose also activates the parasympathetic nervous system, which balances out the sympathetic nervous system.

Inhale in shoulder stand, and exhale and let the legs extend straight behind your head. Let the toes find the mat, and the sits bones reach toward the ceiling. You can keep your hands supporting the low back, or extend them, finding a clasp, and roll the shoulder blades underneath you. This is plow pose. Breathe deeply here for 10 breaths. To avoid neck injury, look straight ahead and do not turn the head to either side. Plow pose is a powerful pose for calming the nervous system as it regulates the breath and blood flow. This is one reason that it is typically practiced at the end of a yoga practice, the ready the body for savasana.

From plow pose, inhale and then slowly exhale and roll the spine down to the mat. When the legs come straight up, hug the knees into the chest. When you are ready, inhale, and then exhale the legs straight down on the mat. Lie flat on your back with your shoulder blades rolled underneath you, opening up the chest. Let your feet relax and fall open. Place your palms up toward the ceiling. This is Savasana, also known as corpse pose. It represents the end of your practice, and your transition into life off the mat. Take a minimum of five minutes here, releasing any stray thoughts and letting your breath wash over you.

As you flow through these poses, remember to listen to your body and your breath. With each pose, you will become more aware of your own personal mind chatter, or citta vritti. Try to let go of these excess thoughts, releasing them with each exhale.

The nervous system is undoubtedly complex, but many of us struggle with the same common issue: an overactive sympathetic nervous system. Through physical yoga poses matched with intentional breath, this imbalance can be overcome.