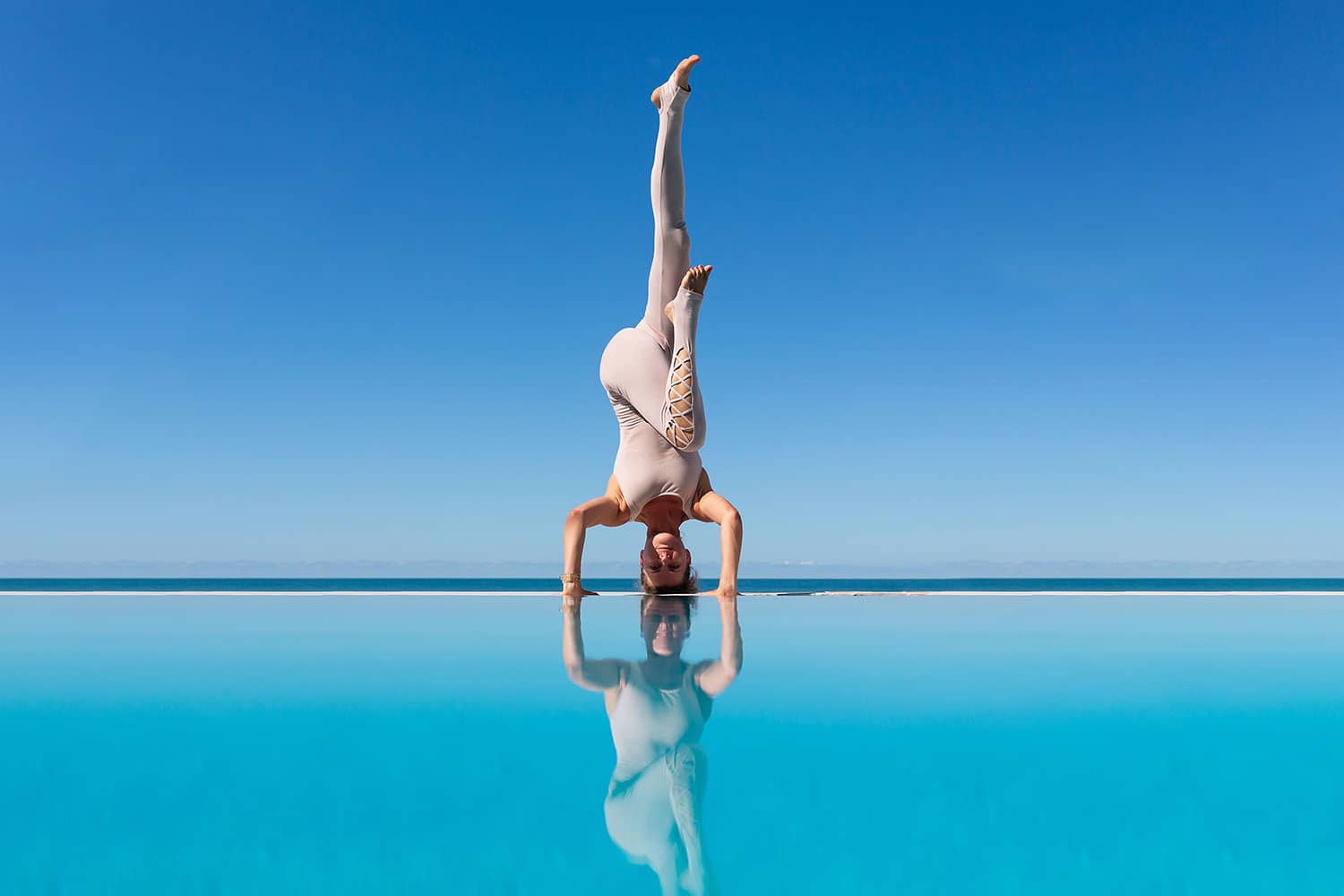 What is Yoga Therapy? Exploring the Therapeutic Effects of Y...

Yoga these days is synonymous with contortionism. But traditional yoga was never about flexibility, stretching exercises, or how many Downward Facing Dogs you can do. Modern postural yoga classes have more similarities with gymnastics and bodybuilding than it does with the spiritual lineage it has roots in.

But that doesn’t mean all the benefits of modern yoga are negated. Even though it has turned into a fitness activity, the spiritual aspect of yoga still remains for many who have taken up the practice.

Where Did Yoga Come From?

Most people know that yoga originally came from India. But this is only a tiny part of the picture.

Archeological evidence shows that some form of yoga asana – seated meditation poses to be exact – may have been practiced in the Indus Valley Civilization. This culture thrived sometime between 5000 and 3500 B.C.E. Researchers believed that even before the yogic wall art was made, it may have been practiced in a non-recorded, oral tradition for many generations even before that.

Yoga is an ancient practice whose exact roots cannot be traced. What is known is that the spiritual lineages of yoga thrived all over the Indian subcontinent, the Himalayas, and even spread throughout Southeast Asia, China, and Japan in the various forms of Hinduism, Jainism, Sikhism, Sufism, and Buddhism.

The Mythological Roots of Yoga

In the Indian pantheon, one of the names or titles of Lord Shiva is Adiyogi, or the source of yoga. The story goes that 15 thousand years ago, Lord Shiva went to Mount Kailash in the Himalayas. He was so filled with ecstasy that he danced uncontrollably and when the joy was too much, there was no other way to express it than to sit in silent stillness.

He sat and meditated in this peace, without moving. You would have thought he was dead, except every so often, tears of pure bliss would frip from his closed eyelids.

Many recognized that he was experiencing something great and wanted to learn from him. So they came to sit with him. But he ignored them. Eventually only seven people remained steadfast.

They proved their devotion to learn the knowledge of the Adiyogi with dedicated 84 years of sadhana, or disciplined spiritual practice in the presence of Lord Shiva even though he seemed to ignore them.

Finally, the seven began to shine so brightly because of their years of service. They were ready to be receptacles of the teachings. Shiva could not ignore them anymore.

He turned himself into the Adi Guru, or the first guru. And these seven were given the seeds to yoga to spread to the rest of the world. The seven men are known as the Saptarishis. They transmitted yoga, as it was directly transmitted to them from Lord Shiva.

What does Yoga Mean?

The word “yoga” is taken from the Sanskrit word yuj which means, “to unite.” The English word for “yoke” has etymological roots in the same Sanskrit word.

Those who have practiced yoga since the dawn of civilization believe it is a science of understanding the body, both physically and energetically, in order to live more happily and to unite with the universal consciousness known as the atman.

Who Can Teach or Practice Yoga?

All people, regardless or creed, color, or class may study and practice yoga. These days, a yoga instructor may undergo intensive training for a set amount of hours to receive a yoga teacher certificate. But this does not make one a yogi or a guru.

According to tradition, the oral lineage of yoga bears more weight than written scholarly works. Even the Yoga Sutras of Patanjali, which is considered the quintessential text on yoga, was meant as a reference for yoga teachers who have themselves learned the oral traditions from a master, and not a standalone resource on yoga.

Beginning from the Adiyogi, Shiva, yoga is believed to be passed down from teacher to student through a direct transmission, called shaktipat, or the descent of Shiva’s grace.

This transmission allows a student to receive all the knowledge and lineage of their guru so that they can also transmit these teachings to others.

How to Practice Yoga

Yoga is traditionally part of one’s sadhana, or disciplined spiritual practice. But whether you are practicing yoga for spiritual evolution or to stay active and healthy, you can follow some general advice:

Where to Study Yoga?

Your local yoga studio is where many people will get their first taste of modern postural yoga. And many of those studios may even have teachers and owners who respect and keep the beliefs of traditional yoga alive.

To go deeper into the more spiritual and traditional aspects of yoga, you may have to look elsewhere, here are ways to study traditional yoga in the modern world.

Traditionally, a guru is one who has received shaktipat from a lineage of gurus. All the ancient texts about yoga point out the importance of studying under a guru who understands how to teach the tradition without changing it but using the vernacular of modern times.

Although not all yoga teachers today have received this transmission, there are many teachers who have studied for years with masters and received their blessings to share the teachings in the west.

Some famous Indian Gurus have been able to use modern technology to reach millions of students all over the world. Spiritual leaders like Sadhguru and Mooji regularly broadcast their satsangs, or spiritual teachings.

Other teachers like Mata Amritanandamayi Devi or Alv Kumar have been able to set-up online learning portals to teach yoga in the traditional way using modem mediums.

In the past, yogis were renunciates who turned their backs on the world because they believed that the world is all an illusion. However, even in ancient times, there were those who recognized that they still had to be present in society even if they wanted to practice and study yoga.

These were called householders and the study and practice of yoga was made possible through the support of a like-minded community called a sangha.

A sangha can be made up of ordained Buddhist monks who live together in a monastery, or it can be a group of friends who get together once a week to sing kirtan together. What binds a sangha together is the common goal of yoga.

Although yoga was already being practiced and passed down for thousands of years, it was only codified into a text by a mythical sage named Patanjali sometime in the second century C.E.

Although it is not the only text on Yoga Sutras that has ever been written, it is the one that has the most influence over modern yoga systems.

One of the challenges with studying the Yoga Sutras is that for non-Sanskrit speakers, you have to rely on a translator’s interpretation of the text in order to understand it. As is the problem with the translations of many ancient texts, this is subject to the translator’s understanding and interests.

This is why even though it is important to read as many different translations of Patanjali’s Yoga Sutras as you can, it is still important to study them under the guidance of a guru who has the blessings and lineage of oral teachings that were never recorded in a written format.

4. Pilgrimage to India (or other Sacred Sites)

There comes a point in many yoga practitioners’ journey that the pull of India becomes too strong. Many flock to holy places like Rishikesh in North India. This is also where the Beatles went on pilgrimage in the 1960s to follow their guru, Maharishi Mahesh Yogi.

Other sacred sites of pilgrimage in India and the Himalayas have been mentioned in mythology and in the vedas, ancient sacred scriptures from India.

These include the sacred rivers, the most famous is the Ganges river which traverses most of the sub-continent and nourished hundreds of civilizations which rose and fell along its banks since pre-history.

Other places include sites where temples have been built where Lord Shiva’s tears fell or where drops of Kali Ma’s blood fell.

Outside of India, yoga practitioners can also deepen their practice at other sacred sites in places like Tibet, Nepal, Bali, Uluwatu in Australia, or other energy centers where spiritual seekers have gathered.

Traditionally, going on a pilgrimage to sacred sites is a natural part of a yoga student’s spiritual journey and studies. There, you will meet others who walk a similar path to yours and you will learn from other teachers and masters who live and teach at those temples and holy places.

5. Don’t Give Up Modern Postural Yoga

No doubt modern postural yoga practices do not resemble yoga as the spiritual path it originally was. But yoga practiced at fancy studios and gyms today still has its merits.

The physical practice of yoga prepares your body for the stillness of meditation. It allows you to be healthy and live a life that is more stress-free and content. Even as a secular, non-spiritual practice, yoga remains popular because you do not necessarily have to believe in any of its spiritual or even esoteric elements to reap its benefits.

Some of the scientifically proven benefits of having a regular yoga practice include:

Yogic masters believe that yoga has been around since the dawn of civilization. While no one can pinpoint exactly when yoga came into existence, it is clear that it has been a spiritual path for thousands of people over the millenia.

Modern postural yoga is merely the latest evolution in this practice that has been passed down from teacher to student. While you can still benefit from modern yoga classes, it is also possible to go deeper into the study of yoga, and by consequence your true self, by going to enlightened masters and teachers of traditional yoga.

How Does Karma Work? The Tru...