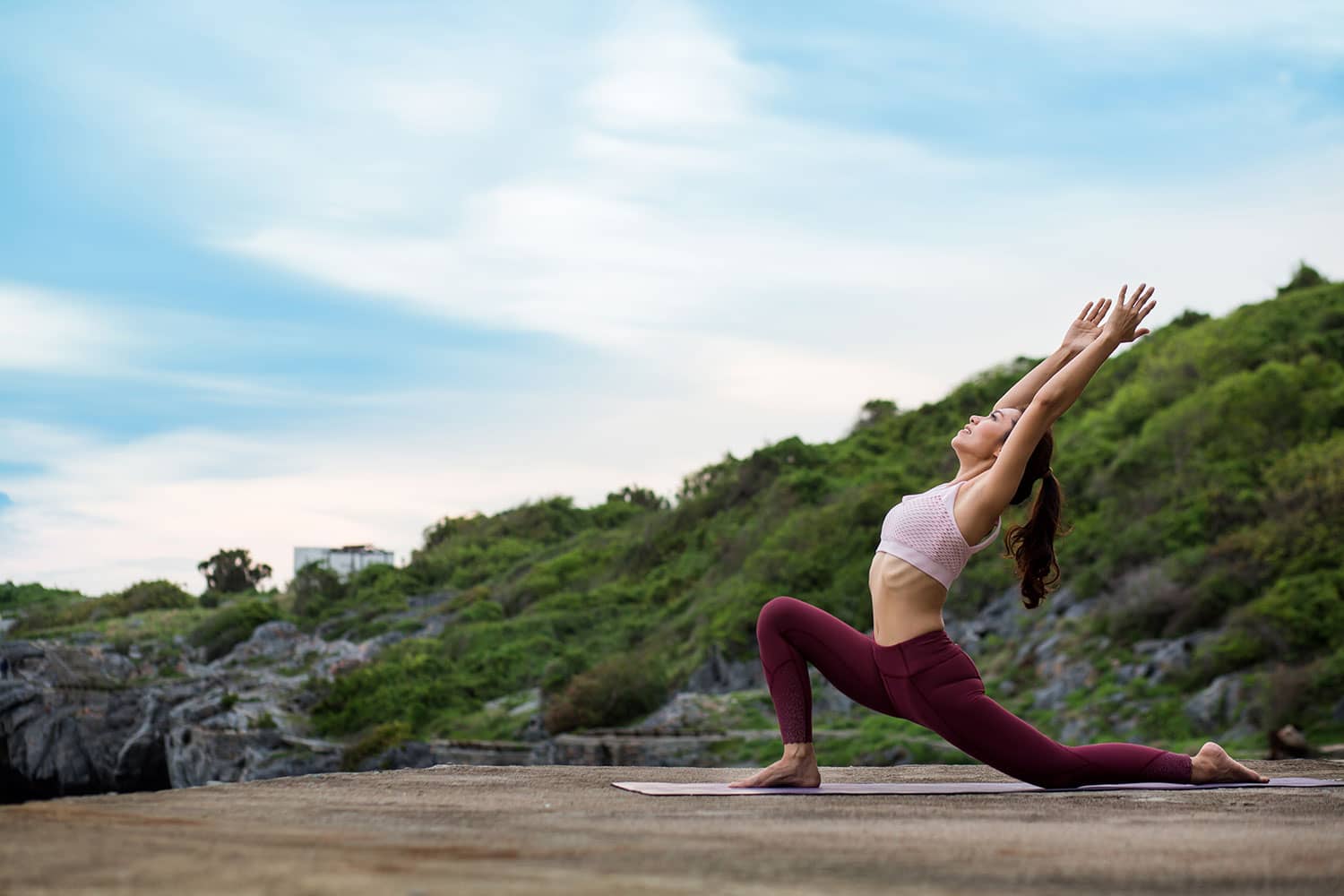 The 5 Best Meditation Poses for Your Practice

Yoga has become one of the most popular rising fitness activities in the past few years. The global pandemic of 2020 has especially seen more people trying out yoga online to keep healthy both physically and emotionally.

There are hundreds of yoga schools and styles to try out. But traditionally there are four main paths of yoga all with the common goal of union of the self with the universal consciousness.

Different personalities will radiate towards a particular path. Most modern postural yoga practices do not go deeper than the asanas, or physical part of yoga. But looking into the four different paths will help you understand this ancient practice and yourself much better.

For many, yoga is a way to stay healthy and active. In addition to helping with physical health, many also very soon discover that yoga also has numerous mental, emotional, and spiritual benefits. Which is why it has been around for thousands of years.

For some, starting yoga was the opposite. They discovered the practice of meditation first before even getting into the physical practice of asana and vinyasa. And for others, the yogic practice of being together in community and even singing songs together drew them to the practice.

These are all reflections of the different paths of yoga and which one may be right for you to begin.

The distinction must be drawn between traditional yoga and what most people in the west associate with yoga, which is actually better defined as modern postural yoga.

Yoga originated in India. But the yoga that was passed down from guru to student through oral tradition and then written in the vedas thousands of years ago is not quite the same as modern yoga.

While yoga classes in fancy studios today focus on dynamic and restorative asanas, or yoga poses, there is little evidence that these gymnastics exercises were the focus of ancient yogis.

According to Mark Singleton, in his book “Yoga Body: The Origins of Modern Posture Practice” yoga practiced, particularly in the western part of the world has no similarity to traditional yoga or South Eastern spiritual lineages of yoga and more to do with modern Indian Nationalism and European spiritual aspirations through body building.

The Four Paths of Yoga

The four paths of yoga are described in the ancient scriptures of India. They acknowledge that each person has different characteristics, personalities, interests, and talents. Therefore, everyone’s spiritual journey is also different.

The four main paths of yoga are outlined below.

Bhakti Yoga is the Yoga of Devotion. This devotion can be towards a guru, your own family, or a friend, but it ultimately leads to devotion to the same thing: the divine.

An example of a tradition which follows the Bhakti Yoga path are the Hare Krishnas. They are known for singing in the streets with their shaved heads and saffron-colored robes. They are practicing their devotion to Lord Krishna through music as well as service.

This path transforms the natural power of emotion into love for a higher purpose.

It is also called the path of love. Bhakti yogis believe that there is a thread made of Pure Love which connects you to the divine. This thread can never be broken however, it is hidden by layers of sadness and suffering.

But if you live your life in love, then this thread reawakens and recognizes the divine in each and every person you encounter.

There are 9 Spiritual Practices on the Bhakti Yoga Path:

Some traits of those who are drawn to the Bhakti Yoga Path are:

Karma is action. This path is the Yoga of Service. It is action without attachment to the outcome of your actions. When you practice Karma Yoga, you remove your personality and ego from your acts of service. You do not serve with an expectation of acknowledgement, reward, or gain. Your service is an act of worship.

In Karma Yoga, service is not enough. The intention behind the service must be with the correct attitude. All acts of work or service become sacred when done in the spirit of karma – right action.

The service performed in the path of Karma Yoga purifies you of egoism, jealousy, hatred, anger, and other forms of suffering. This creates space in your system for joy, love, and compassion.

In the Bhagavad Gita, Lord Krishna said of Karma Yoga, “Do your duty without concern for the fruit of it.” From this, these four principles which are essential to the path of can be pointed out:

Karma Yoga practitioners are usually those with the following traits:

Jnana Yoga is the Path of Wisdom – sometimes referred to as the Path of Knowledge. Self-inquiry through this path is the way to reach enlightenment and to discern between what is real and what is illusion.

It is said that Jnana Yoga is the most difficult of the four paths of yoga because it requires great skill, power, and intellect to dissolve identity, ego, and the illusion of being separate from the divine.

Those who follow this path of wisdom study ancient texts and words of ancient sages, but a true Jnana Yoga knows that what they are truly studying is themselves.

Jnaga Yogis use their intellect, but ultimately accept the limitations of this faculty. They accept that human logic is a faulty instrument to access the infinite. But with this acceptance of their own flaws, they use intellect like a lamp post to support their spiritual search.

Those who are drawn to the path of Jnana Yoga are often:

It is important to distinguish the difference between Jnana Yoga and scholars. Scholars are mostly driven by academic pursuits to feed the intellect. Yogis believe that feeding the intellect is akin to feeding the ego.

The Yogic Path of Wisdom is about studying to break free from the prison created by intellect or the mind.

The Raja Yoga Path is so named because like a king must oversee, take care, protect, control, and even expand his territory, you must also be the same with your mind.

This is the path of yoga that deals with techniques and scripture. It is most favored by Westerners because it appeals to the systematic, logical mind. The Royal Path is best described in the Yoga Sutras of Patanjali which describes what yoga is, the limbs of yoga, and all the rules and disciplines a yogi must observe to practice yoga.

Those who practice Raja Yoga believe that when you are able to control the mind, you are able to enter the state of meditation more easily. If you are in a constant state of thought, you will be unable to see your true nature.

Traits of those who walk the path of Raja Yoga are:

Although the methods of Raja Yoga are ancient in origin, it is believed that the techniques of the Royal Path of Yoga are best suited to the stresses and fast-paced ness of modern life in the western world.

Although it is not explicitly stated in any of the verses, Patanjali’s Yoga Sutras form the foundation of Raja Yoga. But it also describes Bhakti, Jnana, and Karma yoga as well.

Patanjali was a mythical sage who was not the creator of the yoga sutras, but he recorded them in a collection of 195, sometimes listed as 196, verses sometime between 500 and 400 C.E.

The Yoga Sutras of Patanjali are divided into four chapters dealing with different aspects of yoga as a means for self-realization:

Patanjali’s Yoga Sutras also lay out the tradition of yoga in a way that can be understood by and easily accessible by students of yoga. It succinctly outlines thousands of years of discipline into a text that yoga teachers could use as reference.

Of these teachings, the Eight Limbs of Yoga are often referenced. These eight limbs form the basis of Ashtanga Yoga, which literally translates as the eight limbs of yoga.

Although the practice of Ashtanga Yoga has been codified in the Yoga Sutras by Patanjali, spiritual masters and gurus still underline the importance of oral teachings.

In the tradition of Himalayan masters, true teachings and transmissions can only be learned directly from a guru to a student. This is called shaktipat – the descent of Lord Shiva’s grace on an individual.

Modern postural yoga has its origins in Raja Yoga. But this is only one of the four paths of yoga which one can take for their spiritual journey.

The beauty of yogic philosophy is that it takes into account each individual’s unique traits and personalities and presents yoga paths and traditional lineages that allow those characteristics to shine and thrive.

Yoga is not only about doing physical asana in a class. This can be an important aspect of yoga as a spiritual practice, but it is certainly not the only way to practice yoga.

Other ways to practice yoga are through singing and devotion, as in Bhakti Yoga; through selfless service, as with Karma Yoga; through self-study and inquiry, as through Jnana Yoga; and through discipline and physical practice, which is the path of Raja Yoga.

Although these paths may seem different, they all lead to the same ultimate goal which is the very definition of yoga – union.