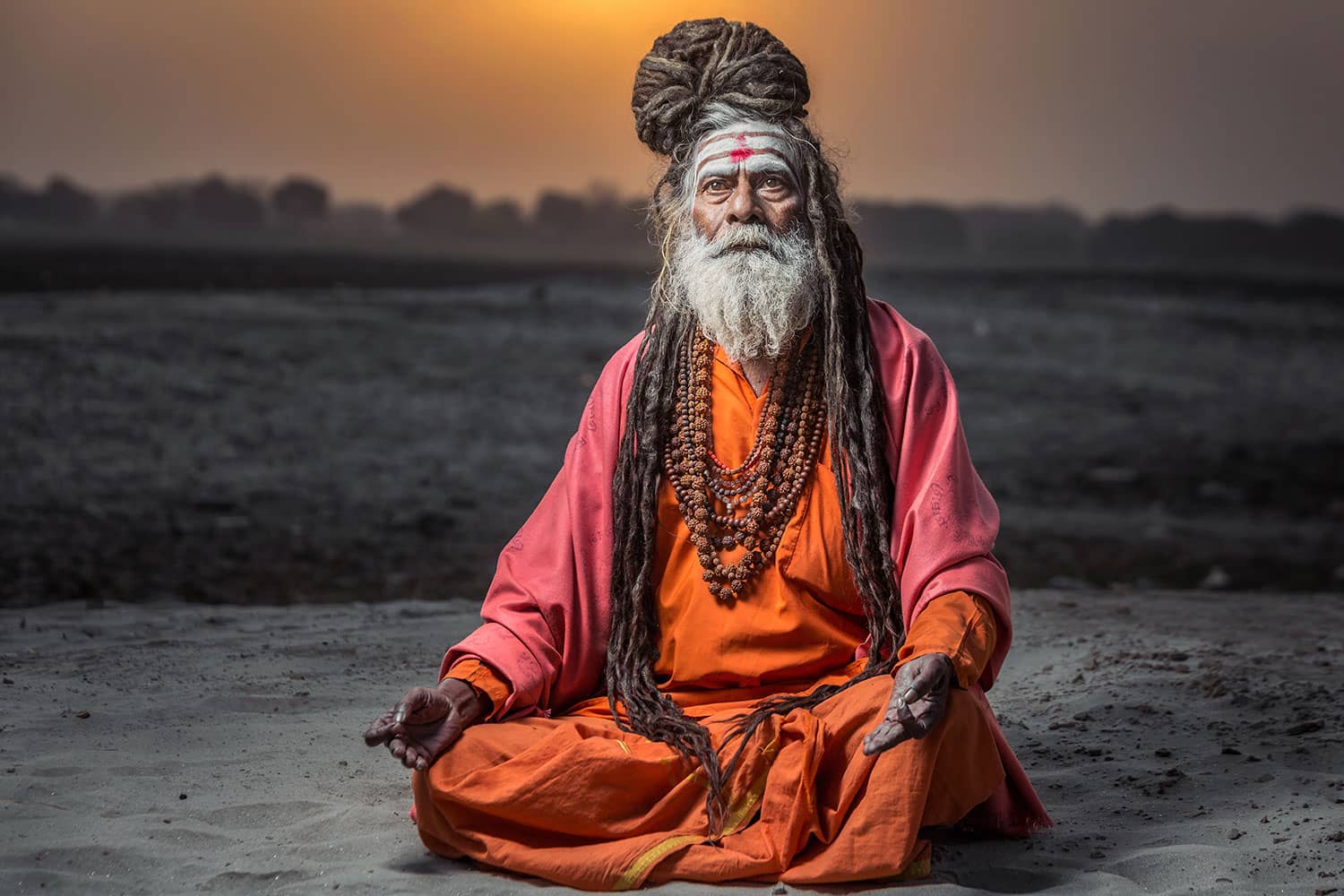 25 Sanskrit Words Every Yogi Should Know

Approximately 30 million Americans now practice yoga and you can Google yoga studios and are likely to have at least a handful within driving distance of where you are. We all know that yoga is beloved by many.

But, where did yoga all begin? Have you ever considered learning the history of yoga and the roots of this ancient practice that so many of us use in today’s modern world? What is the origin, where does it stem from, why was it created and what is the real history of yoga?

Unless you’ve purposefully sought out these answers, it’s not something you’re going to get in a one-hour yoga class.

Yoga’s history has many elements of uncertainty due to oral transmission of sacred texts and the secretive nature of its teachings. Early writings on yoga were transcribed on fragile palm leaves. Obviously, these were easily damaged, destroyed, or lost over time.

Why Should We Learn the History of Yoga?

Learning about the history of yoga and its origin of this ancient and rich practice only furthers a practitioner’s understanding of the depth of yoga. By having a basis of the origin of yoga, we can all take our individual practice to a much deeper level.

You’ve likely heard of Sanskrit but aside from it being another name for the English name of poses, what exactly is it? Sanskrit is the Indo-European language of the Vedas which is India’s ancient religious texts. Sanskrit gave birth to both the literature and the technique of yoga.

One definition of the word Sanskrit is “well-formed, refined, perfect or polished.” This connotes substance and clarity which are qualities that are definitely exemplified in the practice of yoga.

To start with the very basics the word “yoga” is a Sanskrit word and has several translations that can be interpreted in many ways. It derives from the root yug and originally meant “to hitch up.” Another definition was “to put to active and purposeful use.” Other translations include “yoke, join, or concentrate.” To wrap it up, yoga essentially describes a means of uniting, or a method of discipline.

How Did Yoga Begin?

Yoga began out of an oral tradition where the teaching was transmitted from the teacher to the student. The Indian sage Patanjali has been credited with the collation of this oral tradition into his classical work, the Yoga Sutra, a 2,000-year-old written work on yogic philosophy. A collection of 195 statements, the Sutra provides a philosophical guidebook for dealing with the challenges of being human.

on spiritual growth while providing the framework with which all of today’s yoga is based.

Hatha Yoga is the physical aspect of yoga and was developed purely as a vehicle for meditation. Hatha Yoga prepares the body, and specifically the nervous system, for stillness. This creates the necessary physical strength and stamina that allows the mind to remain calm during the practice.

This “union” – what is it? You may get different answers depending on who you ask, but it is commonly seen as a union of mind, body, and soul or a union with the universe or source or god.

When Did Yoga Begin?

Yoga is so ancient that no one can say for sure when it actually started. According to the legend, Shiva was the first yogi and Shiva reached enlightenment in Mount Kailash. According to the story, he had seven disciples who were known as the seven rishis and considered the founders of the most spiritual traditions in the world. None of this can be proved, one way or another.

It is often believed that yoga dates back to 5,000 years whereas some believe it goes back more than 10,000 years. Either way, we know it originated in India and that it’s incredibly ancient. However, yoga doesn’t look the same as it did even a few hundred years ago. In fact, the only existing pose that was around a few centuries ago is the Lotus Pose.

For a very long time, it was thought that yoga began at only around 500 B.C. at the time of Gautama the Buddha, the founder of Buddhism. However, in the early 1920s, archeologists discovered the Indus civilization – a culture that we now know extended over an area of 300,000 square miles. This became the largest civilization in early antiquity. Excavators found many representations engraved that clearly and strongly resemble yogi-like figures.

How Did Yoga Evolve to What it Is?

For some yoga, is mainly used for the physical aspects while others use it primarily for the mental benefits. But, for many, it’s used as both.

Yoga may look different today than it did when it started. However, the very root of all yoga practices is to reach one main goal – enlightenment. For this reason, the practice of yoga highly emphasizes a focus on breath and the inner workings of the mind.

The benefits that yoga offers exist because of its history.

A Basic History of Yoga

For something so old, it would be impossible to include every single bit of information in one post. However, the history of yoga can be divided into a few main categories.

The Sanskrit word veda means “knowledge” and the Sanskrit term rig means “phrase.” Therefore, the sacred Rig-Veda is the collection of hymns praising a higher power. It is within the Rig-Veda that the yogic teachings were found. This along with three other Vedic hymns are known as Vedic Yoga and is also the fountainhead of Hinduism. These texts were used by Brahmans, the Vedic priests.

Slowly over time, yoga was refined by the Brahmans and Rishis who documented these practices and beliefs in the upanishads (a work containing over 200 scriptures). Vedic Yoga was connected with the ritual life of the ancient Indians and revolved around the idea of sacrifice as a means of joining the material world with the invisible world of the spirit.

Preclassical yoga covers approximately 2,000 years until the second century A.D. The earliest moments were still associated closely with the Vedic culture. Gnostic texts expounding on the hidden teachings about the ultimate unity of all things consists of over 200 or so scriptures.  The Upanishads took the concept of ritual sacrifice from the Vedas and internalized it, teaching the sacrifice of the ego through self-knowledge, action (karma yoga), and wisdom (jnana yoga).

Only a handful of these were composed prior to Gautama the Buddha. Again for comparison’s sake, this would be similar to the New Testament, something that is based on the previous works but goes into more detail.

Preclassical yoga includes the many schools that can be found in India’s two great national epics, the Râmâyana and the Mahābhārata. These preclassical schools developed techniques for achieving deep meditation through which practitioners can transcend the body and mind.

Classical yoga is comprised of the eightfold Yoga also known as Rāja-Yoga. This Sanskrit text consists of just under 200 statements. It is thought this was written some time in the second century A.D.

The Classical period of yoga is often seen as the first systematic presentation of yoga, something that was a mixture of various ideas, beliefs and techniques before this period. The practice of yoga was organized into an eight limbed path by Patanjali and contained steps and stages towards obtaining enlightenment. This is why Patanjali is often considered the father of yoga.

What are the Eight Limbs?

Postclassical yoga is comprehensive and refers to all the many types and schools of Yoga that have popped up in the period after Patanjali’s Yoga-Sūtra. Differently to classical yoga, postclasssical yoga affirms the ultimate unity of everything. This new breed of yoga masters created a system of practices designed to rejuvenate the body and prolong its life. The body was considered a temple of the immortal spirit and even explored the possibility of changing the biochemistry of the physical body through energy.

The postclassical yoga masters even rejected the teachings of the ancient Vedas and embraced the physical body as the means to the end – enlightenment. They developed Tantra Yoga which comprised of radical techniques meant to cleanse the body and mind to break knots that bind us to our physical existence. This ultimately led to the creation of Hatha Yoga – as mentioned above is essentially the physical version of yoga that is widely practiced in today’s world.

It was in the late 1800s that yoga masters began to travel to the West and really gained outside attention and followers.

The first instance was of a young Swami Vivekananda who attended the Parliament of Religions in Chicago in 1893 and made a lasting impression on the American public. He traveled a lot and ended up attracting students to yoga and Vedânta.

Vivekananda’s huge success opened a floodgate. The next most popular teacher in the Western Yoga movement was Paramahansa Yogananda, who arrived in Boston in 1920. Yogananda established the Self-Realization Fellowship which still has headquarters to this day.

Yogendra Mastamani arrived in Long Island in 1919 and showed the power and elegance of Hatha Yoga to Americans. He founded the brand of Kaivalyadhama, an Indian organization created by the late Swami Kuvalayananda, which has contributed immensely to the study of yoga.

Krishnamacharya opened the first Hatha Yoga school in Mysore (India) in 1924 and in 1936, Sivanada founded the Divine Life Society on the banks of the Ganges River. Sivananda was also a prolific author, authoring over 200 yoga books, establishing nine ashrams, and numerous yoga centers located around the world.

Hatha Yoga entered mainstream America when the Russian-born yoginī Indra Devi, who has been called the “First Lady of Yoga,” opened her Yoga studio in Hollywood in 1947. Celebrities such as Gloria Swanson were some of her students and she trained hundreds of teachers. This opening was what truly turned a trickle of yoga in the West into a river of interest.

Another great yogi of modern times is the Dalai Lama, of course. He is the champion of nonviolence and a Nobel Peace Prize winner and demonstrates the principles of yoga.

There are many more names that have formed and evolved yoga into what it is today. But, ultimately, Hatha Yoga now has many different schools or styles, all of which emphasize the many different aspects of the practice.sp

Yamas and Niyamas: A Guide t...

A Beginners Guide To Common ...