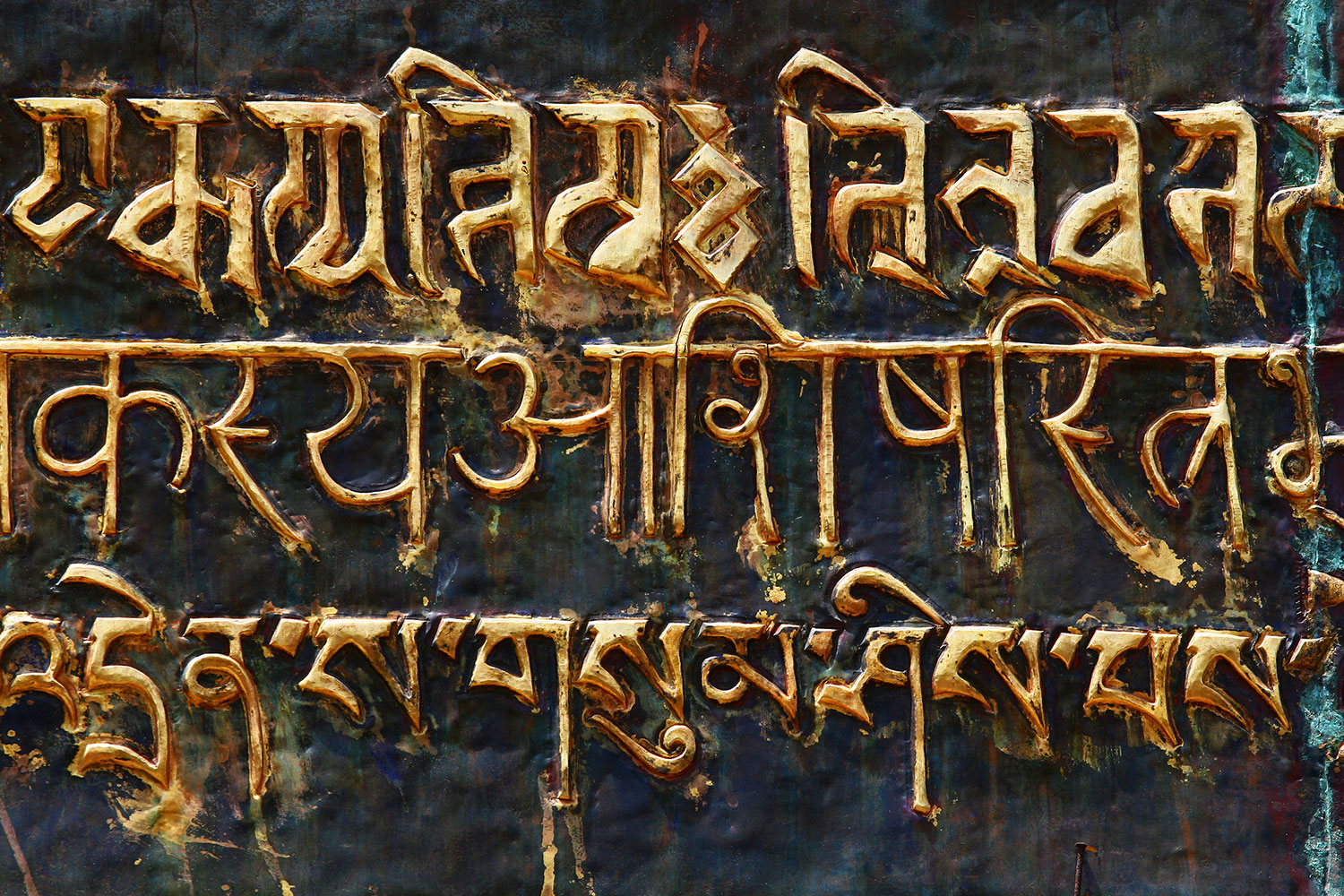 The Meaning Of Mala Beads And How To Use Them

The practice of yoga was originally transmitted from guru to student in an oral tradition in an Indo-Aryan language called Sanskrit. This ancient language was the lingua-franca, or the common language, of ancient and medieval India. Although modern postural yoga classes and yogic philosophy no longer have to be taught in Sanskrit, many yoga asana can be better understood when referred to by their Sanskrit names rather than their given English names.

Not all yoga teachers or students have an interest in learning a foreign language when they begin practicing yoga. But there are a few words that have already entered into common usage and learning just a few words in Sanskrit can already open up a whole new level of this practice to you.

Sanskrit in India and Around the World

The Sanskrit alphabet has 50 letters in Sanskrit: the first 16 are vowels and next 34 are consonants. Many mythologies give importance to these letters and the sounds they make.

Sanskrit was termed as the mother of languages by an 1800’s scholar, Fredriech Schlegel. It shares many similarities to other Indo-European languages like Latin, Persian, and Greek. Many modern English words are still recognizable today from their possible Sanskrit roots.

In 1969, an annual Sanskrit Diwas, or Sanskrit Day, was established by the government of India to revive and popularize the language which is considered the mother of many European languages. Sanskrit Diwas is celebrated on the full moon day of Shravan, the fourth month of the Hindu calendar.

Although there are documented benefits to learning the Sanskrit, you don’t need to become conversational in this ancient language. Here are 25 words in Sanskrit that yoga practitioners will find useful for your everyday practice.

OM is not exactly a word. It is a sound which is believed to resonate at the same vibration of the universe. It is a symbol of the Atman – the supreme consciousness and ultimate reality.

Asana is understood as the postures we practice in yoga. The translation of this Sanskrit word is literally, “seat.” The first yoga asana, developed thousands of years ago, were simple positions held for long periods of time, which were meant to facilitate meditation.

In the Yoga Sutras of Patanjali, the mythical sage described the physical practice of yoga as Sthira Sukham Asanam — loosely translated as “a steady of joyful (or comfortable) seat. So even the most pretzel-like yoga pose in your practice must still be approached with this balance in mind.

Ahimsa is translated as non-violence. It is one of the five yamas outlined in the Yoga Sutras of Patanjali and represents the highest value to lead a moral life. In a broader sense, ahimsa means universal love and compassion. To live in ahimsa is to believe that all sentient beings have divinity in them, so to cause harm or injury to others is to also hurt yourself.

Most yoga practitioners are familiar with this Sanskrit word because of the popularity of Ashtanga Yoga classes. But thousands of years before K. Pattabhi Jois spread his signature yoga series to the world, Ashtanga were the eight limbs of yoga set down in the Yoga Sutras of Patanjali.

The eight limbs are as follows:

The idea behind the Ashtanga is that yoga is a practice that begins from the outer and sequentially go more inwards.

Namaste is still often used as a greeting in part of India and is accompanied by the Namaste Mudra by placing both palms together in front of your heart. It is often translated as “The light in me honours the light in you.”

The first time the word Namaste was heard by a general Western audience was when India gained independence from British colonial rule. In 1948, TIME published that Jawaharlal Nehru, India’s first Prime Minister, made the “namasthe” greeting as part of his public manner similarly to how Winston Churchill of the UK used the V sign.

The word Bhakti is often heard in association with Bhakti yoga, or the yoga of devotion. This Sanskrit word, like many words in Sanskrit, is many layered. It may be translated as: participation, attachment, devotion, love for a personal god, worship, and purity.

The path of Bhakti is often linked to Krishna, although any personal god or deity may be worshipped.

According to the book Tantra Illuminated, one of the origins of the word is taken from tan – wisdom and tra – saves. Other possible translations include tan – expansion and tra – a device. From these, it can be said that the word tantra means a device to spread wisdom that saves.

We have mentioned the Yoga Sutras of Patanjali several times already. The word sutra is very similar to the English word it evolved into which is “suture.”

The Yoga Sutras are an important text for modern yoga because it lays the foundation for yoga philosophy through a series of verses, or threads, which explain how yoga is an external practice that progressively becomes more internal.

Yama is the first of the eightfold path of yoga as outlined by the sage Patanjali. They are also called the the five restraints because they are spiritual guidelines on what one should not do to lead a moral life.

The five yamas are:

Niyama is the second of the eightfold path of yoga. They are observances or positive duties for healthy living and spiritual enlightenment. 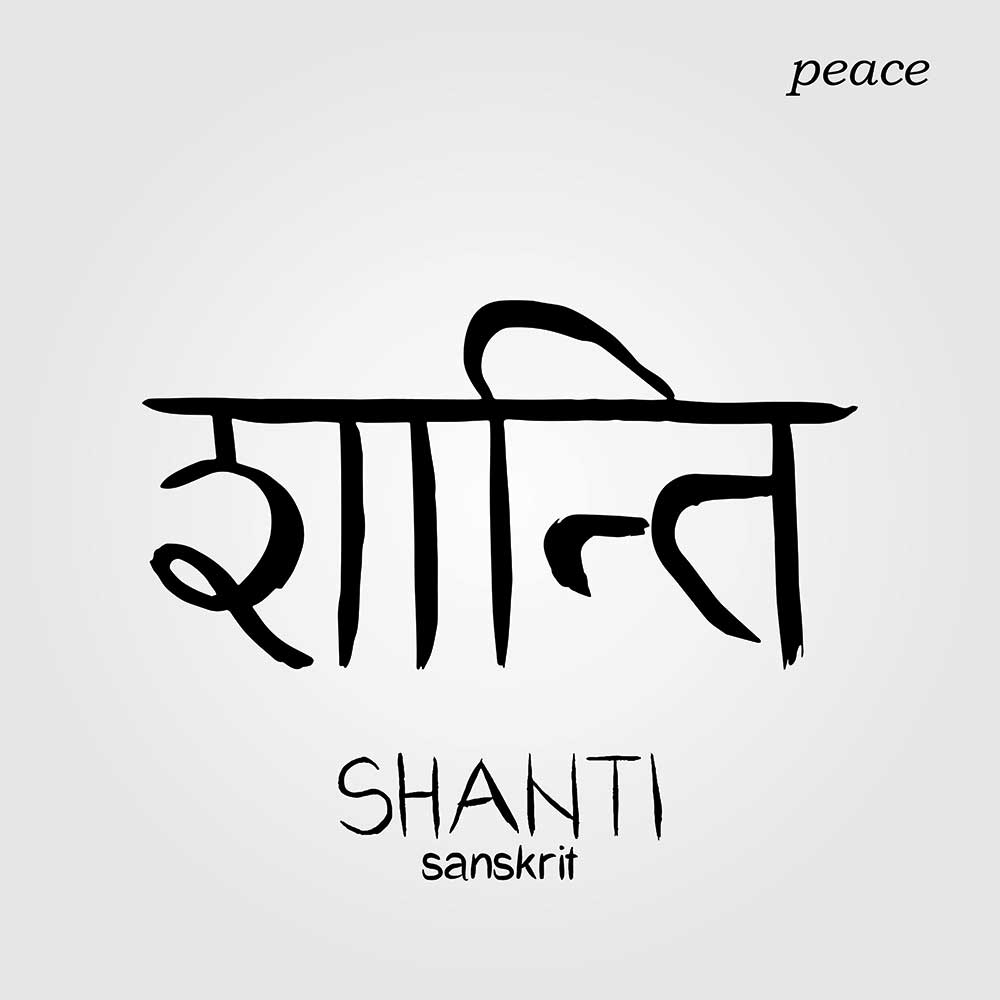 Often chanted three times after the final OM in a yoga class, Shanti is usually translated as “peace.”

It is a deep sate of both inner and universal peace that, when repeated threefold, calls for peace of mind, peace of speech, and peace in the body.

Citta is defined as consciousness or the mind. This is a very important concept in yogic philosophy because, as the second verse of the Yoga Sutras of Patanjali state:

Yoga is the quieting (or re-channelling) the habits of the mind.

Closely related with karma, Dharma is the religious and moral law which consists of truthfulness, non-injury, generosity, and other moral virtues. Buddhism also has a concept of dharma which is the universal truth common to all individuals. The Buddha said that dharma is one of the three jewels to go to for refuge.

Jainism also has an understanding of dharma which is unique to them. In addition to being a moral virtue, it is also a substance that allows us to move.

Drishti is is a practice during asana to gaze upon, or focus, on a spot to help with concentration, balance, and teaches you to see the world beyond the illusion of the mind and for what it truly is.

In the practice of Ashtanga yoga, there are nine drishti points which can be external or internal in the body.

More than being a point to focus on, drishti can also mean a wisdom which focuses consciousness towards the correct vision of oneness. It is a tool which helps us to overcome the limitations of normal human vision and limited ideas and go beyond.

Traditionally, yoga was taught in disciplined lineage directly from guru, or teacher, to student. The role of a guru is much more than a teacher. They are spiritual leaders who hold a duty to pass on transmitted knowledge to their students and disciples.

Gurus do not only have book knowledge on what they teach, but are believed to have experiential wisdom of the teachings they pass on from generation to generation.

Although there are thousands of mantras which have been recorded and memorized for many generations, there is actually no generally accepted definition for what a mantra is. The root of this word in Sanskrit is “man” which means: to think.

Karma is the universal causal law which is shared by many religious traditions from around India. Many think that karma means “what goes around comes around.” But this spiritual principle goes much deeper than that.

It is the belief that all your actions determine your circumstances in this life and in your next life. Much more than just a system of reward and punishment, one’s karma will be able to bring you toward the ultimate goal of moksha, or liberation.

Bandhas are locks that are practiced in different parts of the body to allow the collection of energy and prana. These locks are located in specific areas:

Chakra means “wheel” in Sanskrit. The chakras refers to energy centers located all over the body where prana accumulates. Some systems list as many as 72,000 chakras but most people are most aqcuainted with the seven major chakras:

Many say that hatha simply means ha – sun and tha – moon. But this is one of the many mistranslations that happen with Sanskrit words.

The literal translation of the word hatha is actually “effort.” It refers to the effort and perseverance required to practice the spiritual and physical discipline of yoga.

Mudra are spiritual gestures which are meant to seal certain qualities of energies. The most well-known mudras are usually hand positions, but some mudras can involve the entire body.

It can be broken down into two words: mud – joy and ra – produce. So mudras are meant to produce and spread joy when practiced.

Kirtan means narrating, telling, or reciting. Many know kirtan today as call and repeat style joyful singing of mantras, especially in the practice of Bhakti yoga.

It also has roots in the Sanskrit word which means “to cut through.” So the practice of kirtan is to cut through the idea of separation and connect directly to the divine through sound.

Pranayama is the practice of lengthening one’s breath. Different techniques are used to achieve this, but all are to ultimately deepen and lengthen breathe for meditation.

Tapas are a spiritual practices which one devotes to as a self-discipline. The word in Sanskrit literally means “heat” or “fire.” To devoutly practice tapas, one ignites their inner fire or passion to burn away all impurities.

Finally, yoga is probably to most well-known Sanskrit word all over the world by now. It literally means to unite or tie together. The English word “yoke” evolved from this.

The practice of yoga is mean to not only unite the mind, body, and spirit, but also unite the self with the ultimate reality.