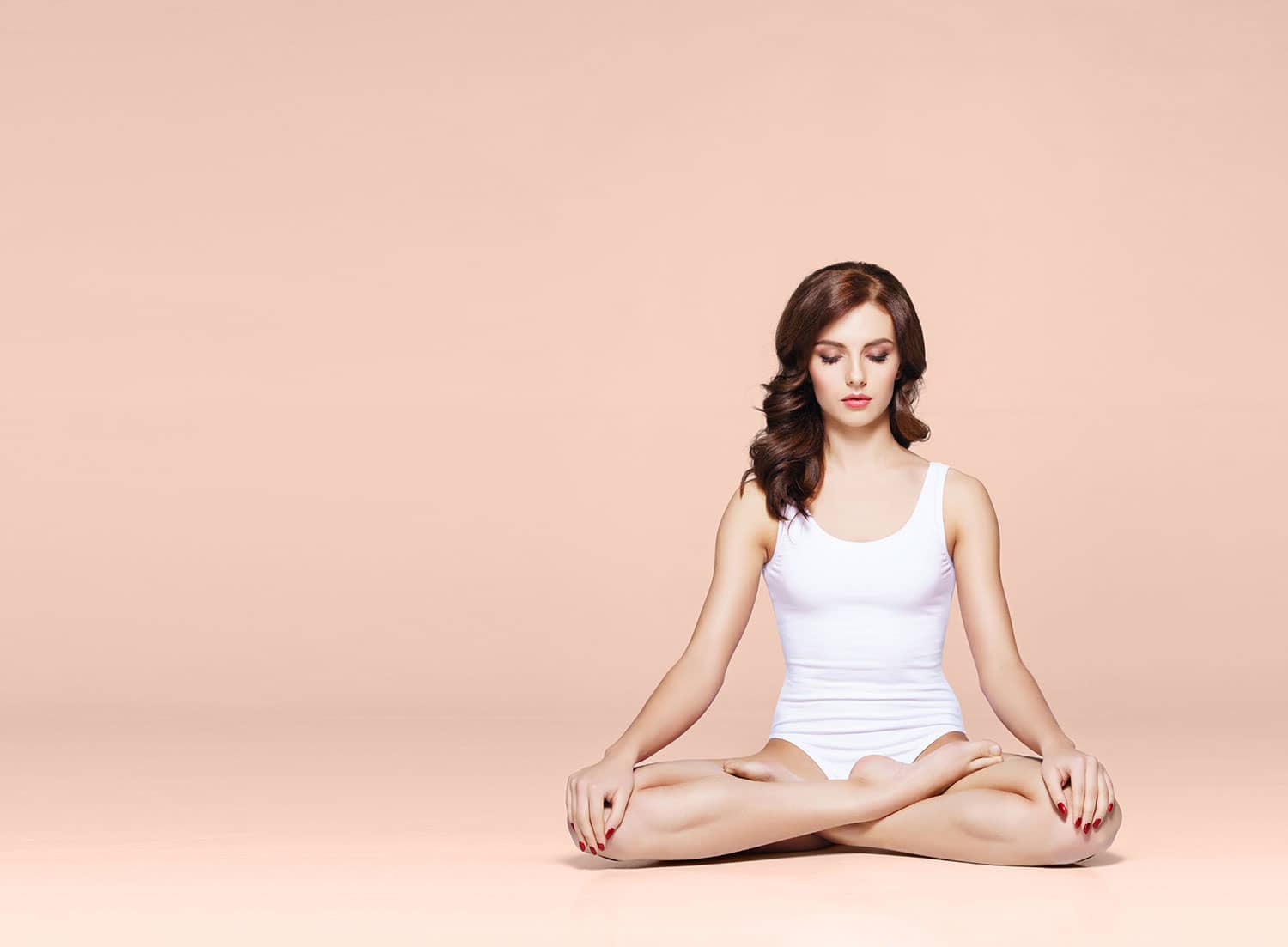 Western practices of yoga have distilled our understanding of yoga into a solely physical activity and workout armed with specific brand clothing and equipment.

But yoga itself is a culture and philosophy that is meant to guide more than just our movements on the mat.

Yoga’s teachings can be examined through the Yamas and Niyamas which serve as a basepoint understanding of the overall culture and lifestyle yoga has to offer.

Considered the moral and ethical codes to yoga, the Yamas and Niyamas offer insight into how to approach your physical, or asana, practice, and provide you tools to develop a deeper connection to your spiritual practice as well.

First, let’s look at the origins of Yamas and Niyamas through the Yoga Sutras.

What is the Yoga Sutra?

“The Yoga Sutras of Patanjali” is an ancient text derived from the sage and yoga practitioner Patanjali.

While little is known of Patanjali himself, these texts serve as a deep, philosophical guide and instruction manual on how to live one’s life in accordance with a spiritual path that leads towards personal enlightenment.

As a comprehensive guide towards yoga as a culture and lifestyle, the Yoga Sutras actually focus little on the physical discipline itself.

Instead, it seeks to create a contextual and well-rounded understanding of the teachings and benefits of yoga that can be discovered off the mat and within our multifaceted existences in this world.

Its spiritual exploration begins by focusing on The Eight Limbs of Yoga that lead towards enlightenment. Here is where we find our Yamas and Niyamas as the first two steps.

The Eight Limbs of Yoga

The eight limbs of yoga are combined to create the Eightfold Path called ashtanga.

They describe a different aspect of the yoga practice on an ascending ladder that leads towards enlightenment and realization.

The Eight Limbs of Yoga are as follows:

This guide is similar to that of other religions but ultimately seeks to be as universal and comprehensive as can be, focusing on virtues that are intrinsically linked to the human experience.

By following the Eightfold Path, one can develop a meaningful and purposeful life that subscribes to moral and ethical codes of conduct and self-discipline.

It is important to note that the Yamas and Niyamas are placed before the physical postures of yoga. They therefore set up the entire foundation of our practice and seek to create a meaningful and intentional approach to our physical disciplines on the mat.

So let’s explore the Yamas and Niyamas and configure our personalized code of ethics within our practice.

The Yamas and Niyamas

The Yamas and Niyamas are often considered the “moral codes” or “right ways of living” within our yoga practice and lifestyle. They are the foundation of our entire practice and provide a code of ethics that will allow us to progress along the path towards mindfulness and enlightenment.

The Niyamas are categorized as cleanliness and contentment, to purify ourselves through heat, to continually study and observe our habits, and surrender to something greater than ourselves.

Since these texts were written so long ago, there are several interpretations of the Yamas and Niyamas from different practitioners as they embody a variety of nuances, and perhaps purposefully so.

For example, contemporary yoga and Ayurvedic practitioner Nicolai Bachman describes his own meaning of Niyama tapas, or purifying through heat.

He urges that this virtue is not so much focused on sweating out our body’s toxins within a hot yoga class. Rather, he describes its purpose as tolerating the heat of friction or mental discomfort.

This example serves as a model for a more secular and contemporary society to consider the Yamas and Niyamas as less rigid directives and more as reflective tools to deepen our own self-awareness.

This means that the Yamas and Niyamas can be personalized to you, making for a unique understanding of how you decide to guide your practice.

For now, let’s explore them in their original texts and dismantle their meanings and definitions.

These vows can be considered universal no matter where you come from or what culture you grew up in.

To be “moral” can be difficult at times which is why it is considered a very important practice within yoga. After all, “yoga” itself means “unity,” “wholeness” or “connectedness,” and therefore encourages us to be mindful, gentle and present.

But if these values are only practiced on the yoga mat, the real benefits of yoga will never fully reach us.

Yamas traditionally guide us towards practices that can be applied to the world around us as well as within ourselves. Below are the five Yamas in total listed in Patanjali’s Sutras:

Feel free to click on each Yama accordingly to delve deeper into their meanings and teachings.

Other texts include further Yamas that combine to make a full list of ten. If you’re interested, the other observed Yamas consist of the following:

All of these virtues and practices ultimately enhance our decisions and actions, allowing us to reach a more considered, aware and higher place within ourselves.

As we endeavor to become more authentic towards others and towards ourselves, the Yamas can help guide us along the path of genuineness.

“Niyama” is often translated as “positive duties” or “observances.”

They are thought of as recommended habits for a healthy living and spiritual existence.

Traditionally, the Niyamas have been thought of as practices concerned with the self through their values can also affect the outside world.

Below are the five Niyamas listed in Patanjali’s Yoga Sutras:

Both Niyamas and Yamas are perceived as keys to unlock the spiritual gates of existence, allowing us to transform each action into one that originates from a deeper and more connected place within ourselves.

These are all ways in which we can help ourselves to be better regardless of whether you are spiritual in nature or a practitioner of yoga.

How to Live the Yamas and Niyamas

If you’re having trouble trying to cultivate your connections to the Yamas and Niyamas, here are some tips that other practitioners have encouraged their students to explore.

Some practitioners encourage standing with poses, mudras (hand-and-finger gestures), and mantras to help embody and explore all 10 Yamas and Niyamas. This acts as a more cerebral exploration of your own morals and ethics as juxtaposed with Patanjuli’s principles.

Connecting these virtues to your physical practice can greatly enhance your physical session on the mat, but the best way to learn the Yamas and Niyamas is to live them.

As previously stated, various teachers will have various interpretations of these codes.

For example, some believe ahimsa, or nonviolence, to be interpreted as not harming others, including not speaking about others in a violent way. Some also interpret this as nonviolence towards animals by becoming vegetarian.

The important thing to remember is that there is no right or wrong way to live your truth.

Your truth is unique and personalized to you and your lived experiences and therefore cannot be dictated by others around you.

Yamas and Niyamas may serve as guides to provide you a pathway on your spiritual journey, but the way you act and react to your environment and inner experiences will ultimately dictate your own discoveries and realizations.

Most often, people find one of the 10 practices particularly challenging for them. So if you find yourself in that position, don’t feel discouraged and know that you are not alone.

If anything, identifying these challenges allows us to navigate our everyday interactions with a greater understanding of our own limitations.

This, in itself, is a knowledge that many people intrinsically possess.

After assessing our limitations, we can then practice developing these weaknesses into strengths, opening up our bodies, hearts, and minds, towards the teachings of yoga.

While the moral codes of yoga are not as instantly gratifying as a good asana practice, they provide us with the tools to cultivate a deep and long-lasting beneficial livelihood.

The Ultimate Chakra Test: Is...