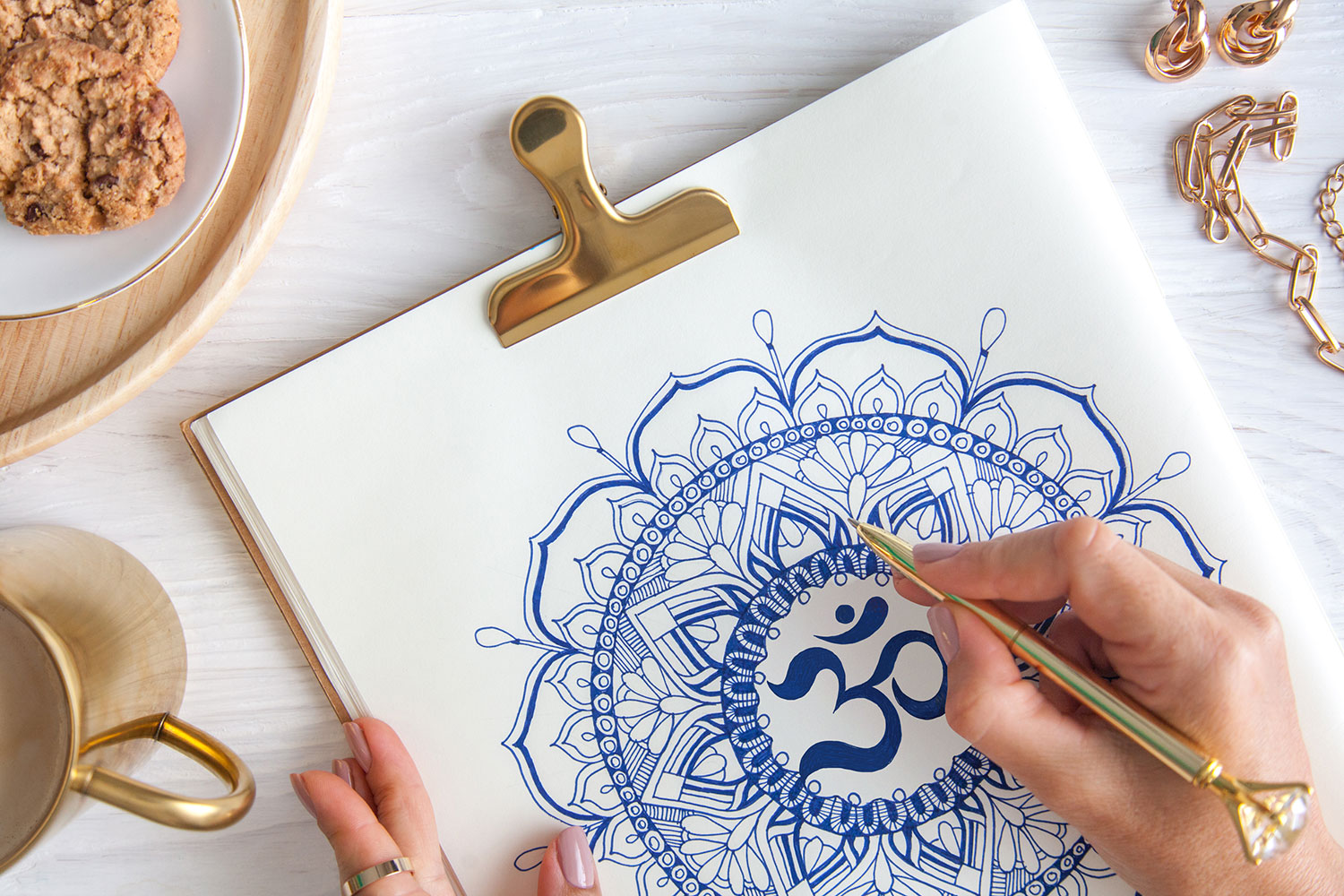 18 Poses to Do Before and After Sleep

Yoga and meditation have made its way to the mainstream in the West. While this transfer of knowledge and practice can highly be regarded as positive, there are also concerns about cultural appropriation. Sacred symbols of other cultures are printed on t-shirts, hand on wall coverings in studios, and Buddha statues as home decor with little or no understanding of what they are or their origins. By learning about the meanings of the symbols are and using them in appropriate ways, we can offer respect to their origins.

The Om symbol is frequently seen in yoga studios, meditation centers, and sometimes even on window decals. The sound OM or Aum is said to be the sound of the universe. It’s comprised of three different sounds. The A represents creation, the U stands for manifestation, and M is for destruction. Om has ties to multiple religions. In Hinduism, it represents unification. In Buddhism, it is a reference to compassion and connectedness.

The symbol itself is comprised of five different curves and lines. The bottom left curve symbolizes being conscious. The top curve represents the unconscious state. The curve on the lower right stands for the dream states, the space between being awake and the unconscious state. The semicircle at the top represents illusion which is considered to be a major obstacle to developing spiritually. Finally, the dot at the top represents the absolute state which is considered to be the highest state of consciousness.

Om is frequently used in chanting to enhance the body and mind’s vibrations. When chanting, do it slowly to help focus the mind. If using the symbol, place it somewhere with reverence to help incorporate its meaning into your life.

The lotus flower is frequently seen in yoga and Ayurveda. It is seen in many religions and cultures, specifically Hinduism and Buddhism. Chakras use the lotus flower as a symbol, with each chakra having its own lotus flower with a specific color and a specific number of petals with their own symbolism. In Buddhism, there is a legend that everywhere the baby Buddha stepped a lotus flower sprung. Like the chakras, different colored lotus flowers have different meanings. White represents mental purity, while red represents love and compassion. Blue stands for intelligence and wisdom while gold represents complete enlightenment.

The lotus flower represents and enlightened mind. In nature, the flower grows at the bottom of a pond in the mud. Its journey up towards the sun is harsh and even once it reaches the top, there is a balancing act of the flower. The petals rest above the water staying in perfect balance. This is reflective of the journey individuals must take. The flower at the top does not exists without the mud or the challenging journey through murky water up towards the sun.

Its no wonder that it is displayed in modern culture but when using it in yoga and meditation, its important to under its significance from different cultures.

Mandala translates from Sanskrit to circle or center. There is an infinite number of mandalas, often drawn in circles that can either be symmetrical and extremely precise or more fluid and organic.

In both Buddhist and Hindu traditions, they are another tool to help aid in meditation and spiritual development. They reflect the universe and the individual with the symbols representing one’s personal spiritual journey. While both the Hindu and Buddhist religions utilize mandalas they have a different focus. Buddhists focus on the mandalas to represent the possibility for enlightenment with the mandalas representing the obstacles individuals need to overcome to develop wisdom and compassion. In the Hindu religion, there is a greater focus on the realization of the self with the divine. Additionally, they are used in other religions or cultures such as Christianity and Native American beliefs.

While there are many types of mandalas. There are three main types that are frequently used. There is a teaching mandala, where each shape and line is symbolic based on a different philosophical or religious system. Students make their own mandalas based on what they have learned through teaching and spiritual development. Healing mandalas are made to practice meditation on and used to evoke wisdom, feelings, or increase focus and concentration. Sand mandalas have been used in both Buddhist and Navajo cultures. These contain intricate symbols made from colored sand and represent impermanence.

When using mandalas in your own personal practice, learn the significance and the importance of each symbol you choose to practice on.

Malas are seen dangling off of the wrists of yogis and non-yogis in studios and Instagram. While there is no problem wearing malas on the body, its a good idea to understand the difference between a mala and regular jewelry. While the exact origin of mala is still unknown, they have been widely used across different religions for centuries. Some historians believe they originated in India by the Hindus, while others trace it back to Buddhism. Regardless of their origins, they have always been used as a powerful tool in meditation.

A traditional mala has 108 beads with a guru bead. 108 is considered to be a sacred number. They are meant to be a source of focus during meditation with the practitioner using each bead to repeat a chant or prayer. Malas can be made from a variety of materials with some being made from seeds or beads while more expensive options include rocks or gemstones. The beads can also have their own healing properties whether its to help align the chakras with their colors or the gemstone’s specific healing qualities.

By practicing meditation on the mala beads, you can increase your focus and concentration. They assist in keeping track of how long you are meditating without focusing on time. If using a certain mantra or chant, they assist with the repetition of sounds such as bija mantra. If you own a mala but have not practiced on it, it can be a worthwhile endeavor to use the mala for its intended purpose.

Mudras are frequently seen in photos of people practicing meditation. When we hear the word mudra, many people think of hand gestures. However, it translates into “seal” or “mark”. While mudras are often considered to be just in the hands it can encompass the entire body as well. Additionally, while most people may only see mudras as gestures of the hands, they also include movements in the wrists, elbows, and shoulders. They can also be incorporated with pranayama in yoga practices.

Hand mudras are often seen in pictures or statues of Hindu deities. These gestures have been practiced for thousands of years and are utilized to deepen practice and awaken the power of the divine. Additionally, they help move prana and direct it to various directions of the body based on their posturing. In Ayurveda, each finger is linked to a different element and can help bring balance to the different doshas and create more balance and well-being in the body. They can also be seen as an outward representation of internal intentions.

The are many hand mudras to practice. They are used in ceremonies, yoga, meditation, and even dance. If you are encouraged to use them by an instructor, it can show respect to the culture by asking what the significance is for seal.

Singing bowls are often used as a symbol representing meditation. It’s even the logo for the popular meditation app InsightTimer. A singing bowl is a musical instrument that produces sound through vibrations. There are two ways to create sounds, either by striking the bowl with a mallet or dragging the mallet around the rim of the bowl. Singing bowls all have their own distinct sound and multiple bowls are required to play different notes or tones.

Little is known about singing bowls’ original origins. It is said that the first singing bowls were made in Mesopotamia over 5000 years ago. It is believed that the first singing bowls were made of pure copper and use for medicine as well as being a musical instrument. They were later made with brass. Originally, in Tibet, singing bowls were in monasteries and homes but little was discussed about them and their meanings kept secret. Although, it is likely they were used for sacred and secret rituals. However, once Tibet was invaded by the Chinese, people were forced to flee their homes and eventually sold their bowls to survive, leading to the bowls being used all over the world.

Today, singing bowls have migrated to the West. They are used in yoga classes to signify the end or start of practice, at meditation centers, or for sound healing. When using singing bowls, researching where it was purchased from, its sound, and its context can make the difference between cultural appreciation versus cultural appropriation.

Yoga and meditation practitioners may frequently be exposed to different symbols in their practices. If choosing to wear these symbols or place them in their home, it’s important to understand their cultural significance to honor and respect their origins.