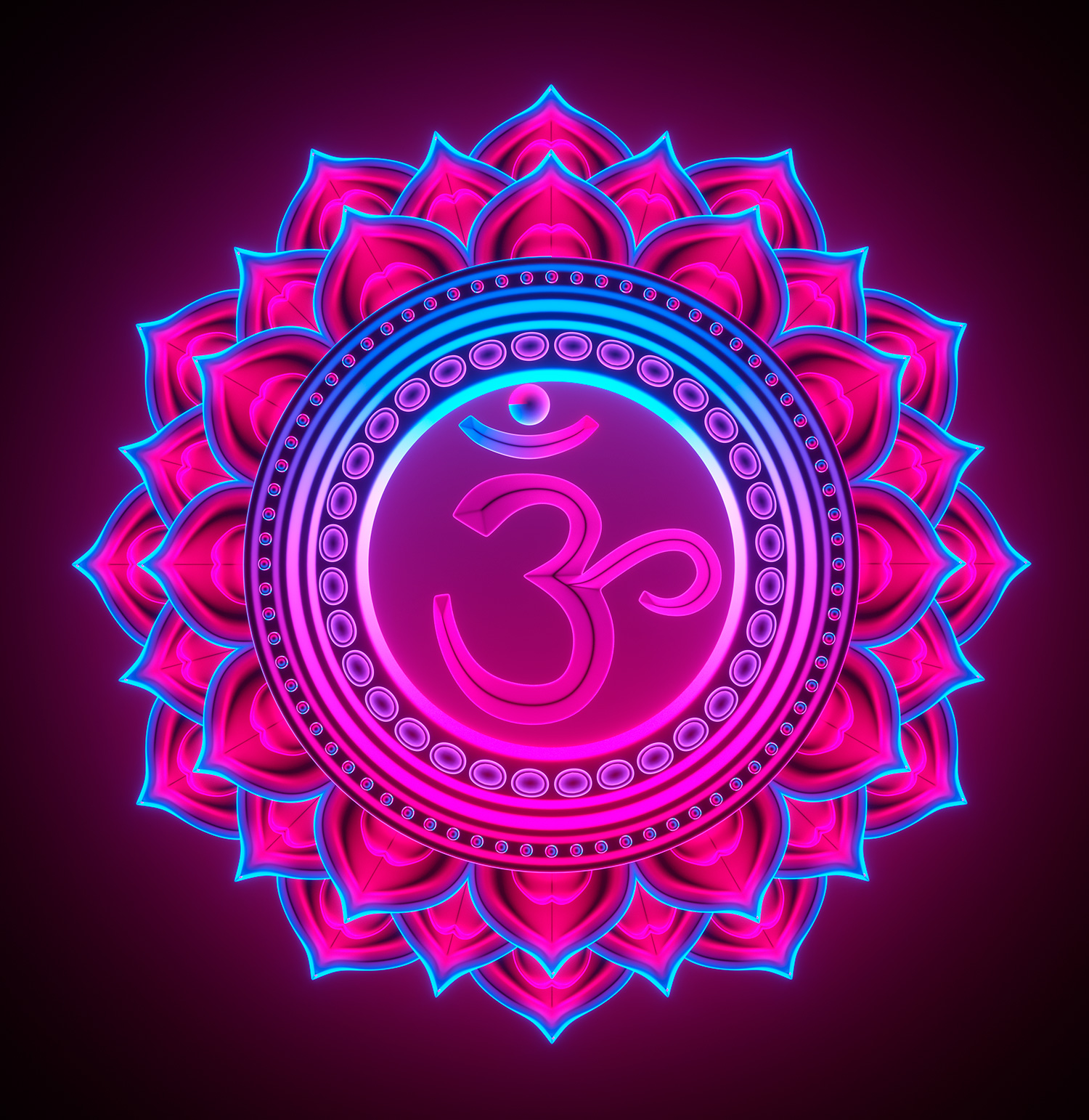 Most of us are more acquainted with the symbol and sound of Om than we realize. It is a sacred sound vibration chanted frequently in many different types of yoga classes, and its symbol crops up everywhere within the yogic community. However, while we may be accustomed to seeing, hearing, or speaking it, the meaning of this ancient symbol largely goes unexplored. In the Western world, Om is one of the yogic symbols and sounds we don’t often dig deeply into, but when we do, we find that it has a much more powerful meaning than we might have realized.

Origins of the Om Symbol

Om is one of the most sacred (if not the most sacred) mantras in the Hindu tradition. It is now a mantra practiced all over the world, but its presence is most prominent in countries where Hinduism, Buddhism, and Jainism are commonly practiced. The origins of this sacred sound and its associated symbol run deep, having been mentioned in numerous ancient scriptures centuries ago.

The earliest appearance of Om is in the Mandukya Upanishad, an ancient and sacred Hindu text that dates back to somewhere between the first and fifth centuries BCE. Scholars are not quite in agreement on when this text was first written, though its roots are unarguably deep. This first explanation here explains Om to be a symbol representing the past, the present, the future, and everything existing outside of these times.

The Mandukya Upanishad is not the only sacred text in which this symbol appears; other Upanishads (a term referring to ancient Sanskrit texts that are an integral part of the Vedas) make reference to it. In addition to the Mandukya, it is also noted in the Mundaka, the Svetasvatara, and the Katha.

The Bhagavad Gita and Patanjali’s Yoga Sutras also refer to the symbol Om. Each reference offers a unique explanation of what this term refers to, but ultimately, the original texts point to the belief that Om represents the infinite – everything that is, was, and ever will be.

What Does the Om Symbol Mean?

According to Indian scriptures, the symbol Om is the primordial sound from which all other sounds emerge. As such, it represents the immortal and the infinite; it holds the entire universe within it. Various texts, however, offer slightly different insights into the meaning of the term, taking the exploration of Om a few steps further.

As mentioned, Om, as it is described in the Mandukya Upanishad, refers to the past, the present, and the future. Another analogy in this text explains that Om and soul are like bow and arrow, respectively. The target of this bow and arrow is Brahman, which can be understood as the ultimate reality of the universe or as consciousness itself. When aimed and release, the arrow becomes one with this ultimate state of consciousness. All notions about the individual self, the ego, and any other concepts for that matter dissolve. The soul is in divine harmony with what is absolute.

In the Bhagvad Gita, Om is also described as the absolute state of consciousness. In relation to chanting this sacred mantra, a translated excerpt from the text suggests, “One who is engaged in the practice of concentration, uttering the monosyllable “OM” (the Brahman or consciousness) who remember it always will attain the supreme goal.”

Patanjali’s Yoga Sutras also refers to the symbol Om through mention of Pranava. Pranava is defined as being essentially the same as Om, or Ishwara, and Ishwara is understood as God. Thus, Om is believed to be the same as God – the absolute, the supreme, and the infinite.

If we look at the visual symbol that represents this sound, we see a deeper meaning of the word hidden in the shape it takes. The bottom curve represents the waking state, the middle curve is symbolic of the dream state, and the smaller upper left crescent is associated with deep sleep. The small curve at the top right, unconnected to the rest, represents Maya, or Illusion. This illusion is what stands in the way of our realizing the absolute or the infinite, as denoted by the dot at the top right corner of the symbol.

No matter which way we look at it, through sound or sight, Om is a symbol of the infinite and of all of the forces of life that fall within or beneath it.

While the term is most commonly written as Om, the symbol has another spelling: the three-lettered Aum, or AUM. These three letters provide a deeper insight into what the sound and symbol represents, offering more than one explanation of what this symbol points towards.

If we look closer, we come to see that AUM also represents all of the forces in nature. These forces can be described as creation, preservation, and destruction; they represent the entire cycle of life, from birth to life to death. Each of the three letters represents one of these forces: “A” is considered to be the vibration of creation, responsible for brining the universe into existence; “U” symbolizes the vibration or sound that preserves whatever has been manifested; and “M” is representative of the vibration that destroys it all, bringing all of creation back to the absolute ­– to the infinite. Each letter can also be associated with a Hindu god, the three together representing the harmony or union amongst all three. “A” represents Brahma, “U” symbolizes Vishnu, and “M” is symbolic of Shiva.

Om is also said to represent the four states of consciousness: waking, dreaming, deep sleep, and the transcendental. All together, these states represent all of creation.

The waking state is associated with the letter “A” and is externally directed. It is symbolic of the everyday world where we experience a sense of self that carries us from place to place and is aware of our interactions with the world.

The dream state, associated with the letter “U”, represents a more internal reflection of the outer world. The outer senses quiet down in the dream realm leaving the mind as the primary force driving this state. The world turns inward.

In deep sleep, associated with the letter “M”, time and space dissolve. In this state, the self is unconscious – there is no longer a sense of being a “self.”

Finally, the transcendental state, or Turya, is also known as the state of samadhi; it is also the eight limb of yoga. This state is found in the silence that follows the mantra Aum. It is not necessarily a fourth and final state; more accurately, it is the backdrop for every other state that we move through.

How to Practice ‘Om’

Om is repeated three times in many yoga classes, typically at the end of practice. It can also be used in meditation, helping to draw us into a state of deeper connection with the absolute state of reality. As a single syllable mantra, it is also a perfect practice for beginners, establishing greater familiarity with the power of chanting. It can help to open us up to other practices such as Bhakti yoga.

Though it is a single syllable, there are three sounds associated with the chant – “aaahh,” “ooooh,” and “mmmmm.” To deepen the practice of chanting Om, it is helpful to first practice repeating each of these sounds mindfully and with focused attention.

To practice breaking Om down into its subtly separate sounds, try the following:

Once you have practiced these sounds individually, string them together to chant the primordial sound Om. Repeat three times or more, allowing yourself to surrender to the vibration of the mantra. Remember to allow time to sink into the silence that is the backdrop for this sound. You might also take some time to reflect on the meaning of this symbol and sound, taking a closer look at the infinite is offers to carry us to.

The Power of Om

As the primordial sound from which all others emerge, it would be an understatement to say that the Om symbol and mantra are hugely important in yoga and yogic philosophy. Chanting Om is a powerful practice, that when reflected upon and surrendered into, can offer us a sense of being deeply connected to the divine universe that supports this life. By releasing the mind and breathing into this practice from the heart space, we might find that chanting Om helps us to move closer towards Samadhi – towards the eight limb of yoga that is so often sought after.

What is Tantra Yoga?