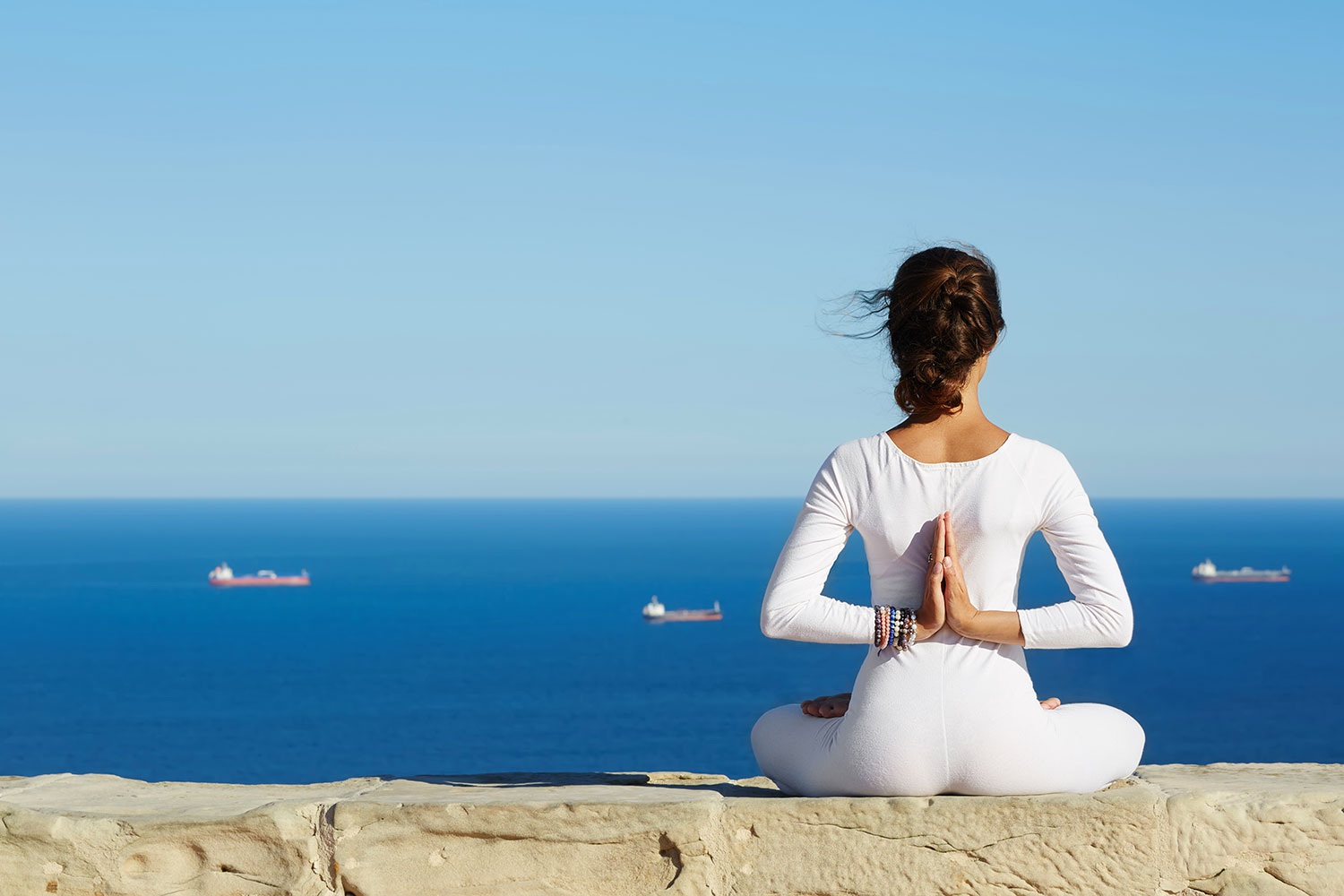 17 Best Yoga Videos for Beginners to Get You Started

Sanskirt, the ancient Hindu language, can be hard to understand. The language has words that are often heard in yoga class or heard in anything about yoga, so it helps to have an idea of some of their meanings.

In Sanskrit words are like living beings; depending on context, circumstance and environment their mood varies and meaning differs. Amit Ray, Walking the Path of Compassion

In a yoga class, it is almost inevitable that there are going to be some terms that are metaphorical, Sanskrit, and probably hard to pronounce that may leave you wishing that you had a yoga dictionary with you. But don’t worry! We all start somewhere. Here is a list of 50 terms that often are heard in a yoga class that could sound like gibberish if you are new to the class or cue something that has a deeper meaning. Most of these have much more depth and details to them than what is defined here. So for deeper understanding, further reading and translations is beneficial. Sanskirt writing often has several different translations. But for the sake of the read, this is a brief overview.

Yoga in the Body

The Limbs of Yoga

Yoga in the Body

These are Sanskrit terms in the yoga tradition that are techniques, skills, and energetics that are important in practicing yoga. They can improve the physical body, your practice, self-exploration, growth, and understanding.

Bandha – The term for Body Locks that are engagements within the body for the integrity of a yoga practice.
Mula Bandha – The Root Lock of the three bandhas. It is a contraction and engagement of the perineum, the sex organs.
Uddiyana Bandha – The engagement of the core by the action of contracting the naval into the rib cage.
Jalandhara Bandha – The Throat Lock. Done by tucking the chin in slightly towards the chest.
Chakra – Energy centers aligned in the body that are energetically and physiologically powerful. There are 7 main chakras within the body and they interact among each other, throughout the body and mind. There is an 8th chakra that is not often mentioned, the “aura,” the energetic field that surrounds each being.
Muladhara – The Root Chakra. Located at the base of the spine and holds the energy of your means of survival, security, grounding, and self acceptance. The color associated is Red and has the element of the Earth.
Svadhisthana – The Sacral Chakra. Located at the sacrum and holds energy of creativity, sensuality, relationships with others, and the relationship with the self. The color is orange and has the element of water.
Manipura – The Solar Plexus Chakra. It is located at the naval center and holds the energy of confidence, awareness, strength, spontaneity, and core being. The color with this chakra is yellow and the element is fire.
Anahata – The Heart Chakra. Located at heart center, this holds the energy of compassion, love, kindness, the balance between heaven and earth, purity, forgiveness, and caring for others. The color associated is green and the element is air.
Vishudha – The Throat Chakra. Located at the center of the throat and the energy here is of communication, truthfulness, hearing the truth, speaking the truth, and projection of your true self. The color associated is turquoise and the element of Ether.
Ajna – The Third Eye Chakra. Located between the eyebrows at the center of the forehead, the energy held here is the seed of intuition, knowing, and understanding. The color associated with the third eye is indigo blue.
Sahasrara – The Crown Chakra. Located at the crown of the head, this chakra has the energy of transcendence, connection to the highest self, and the relationship to the unknown. The color with the Crown Chakra is violet purple.
Nadi – Connection and energy lines throughout the entire body. In yogic texts, it is said there are over 72,000 Nadis in the body. The two main are the Ida Nadi and the Pingala Nadi.
Prana – Translates to “Life Force” and also refers to the breath.
Ujjayi – A breathing practice that is often cued during yoga classes. Inhales and exhales are matched in length, through your nose, and loud enough to hear.

These are two ancient texts that are at the root of the philosophy of yoga.

Sutras – ancient teachings of Patanjali of how to live a yogic lifestyle, practice, meditate, and ways of taking the path to the highest self.
Bhagavad Gita – An ancient Hindu text that tells the story of Krishna leading Arjuna on the spiritual journey and exploration of the self, and the way of connecting to the highest self through yoga.

The Limbs of Yoga

There are eight limbs of yoga. Traditionally taught, you must take the path starting at the first limb and continuing on for your journey through yoga each day.

Yama – From the teachings recorded in the Yoga Sutras of Patanjali. The Yamas are the universal, ethical, and moral guidelines of practicing yoga.
Ahimsa – Non-violence. This translates to practicing non-violence towards ourselves and towards the world around us.
Satya – Truthfulness. Meaning to live our truth, speak truthfully, and practice honesty.
Asteya – Non-stealing. The practice of not stealing from yourself and from the world around you in any way that can be.
Brahmacharya – Moderation of the senses. Sometimes translated as abstinence but more so means to mindfully use your energy in the right way.
Aparigraha – Non-greed. Also translates to non-attachment meaning to practice not taking more than what you truly need.
Niyama – guidelines of interacting with self. The niyamas are character building practices.
Saucha – Cleanliness/purity. Purity of the being and cleanliness kept in the world around you.
Santosha – Contentment. Practicing contentment, being okay and thankful with your own life in each moment.
Tapas – Discipline. Also can translate as heat. It means practicing self-discipline to grow stronger.
Svadhyaya – Self-study. Practicing self-exploration and study fully through meditation and recognition.
Ishvara Pranidhana – Surrender to the self. Embracing and surrendering fully to all consciousness and your highest being.
Asana – The third limb. Literally means, “to sit.” This is the strength and flexibility from the yoga postures of practicing yoga.
Pranayama – The fourth limb. Breath work or control of the life-force. Any breathing technique and control of the breath is pranayama.
Pratyahara – The fifth limb. Withdrawal of the senses, drawing in of the senses for deep connection beyond mindlessness.
Dharana – The sixth limb. Having one pointed focus and concentration.
Dhyana – The seventh limb. Having a focus that you can hold in meditation.
Samadhi – The eighth limb. Becoming blissfully absorbed into your highest self.

These are different styles of a yoga practice. Each have their own purpose and way of practicing, but they all have the roots of yoga’s core values. An individual can practice one or as many styles that fits their own journey.

Vinyasa – there are a couple of different meanings behind the term vinyasa and how it is used in a class. It translates to movement paired with breath, so when you go to a “Vinyasa class” it is a flow class that links breath with movement. When you are in a class and the instructor says “take a Vinyasa” that means to take a flow of your choosing, typically an Upward Dog to Downward Facing Dog.
Kundalini – A form of primal energy coiled at the base of the spine, Shakti, that is within each being. Kundalini yoga is a collection of thousands of kriyas, which are intentional movements or practices, taught by Yogi Bhajan to awaken one’s inner kundalini.
Yin – The female energy of a practice that is slower and calmer. In yin yoga, poses are held for several breaths, at least a couple minutes, to get into releasing the deep tissue and fascia of the body.
Bhakti – Love and devotion. Bhakti yoga classes usually include chanting or singing as a way of devotion.
Ashtanga – Set sequences of three different seires of vinyasa yoga developed and made popular by Sri K. Patthabi Jois. This practice is meant to be challenging, increase strength and flexibility, and cleansing of the body and mind.
Hatha – The collection of both masculine and feminine energy (Ha=sun and tha=moon). Hatha yoga is meant to help find balance through the body, mind, and spirit and create space for spiritual growth.
Tantra – Meaning “woven together,” tantra is the yoga of union. It is not about tantric sex that is popularized, but rather union with other beings in any way and within yourself.
Kirtan – Spiritual community gathering of yogic singing, chanting, and meditation.
Ayurveda – An ancient of living that comes from the same Hindu roots that yoga originated. It incorporates nutrition, medicine, and unique types (know as doshas) designed to help an individual understand their own tendencies and needs.

These are a few of the common terms you may hear that go along with a yoga practice. They are different techniques and meaningful parts of a practice.

Mantra – Word or phrase that is repeated to deepen the practice spiritually and emotionally.
Mudra – A placement or arrangement of the hands or fingers. Mudra translates to “seal.” Each mudra has its own meaning and they are used to facilitate a certain flow of energy and evoke different things. Anjali Mudra, hands together at heart center, and ¬¬¬Gyana Mudra, the index finger and thumb touching, are common mudras.
Drishti – A fixed gaze point. Keeping a set gaze point helps to maintain balance.
OM – the universal sound and vibration of all living things. It is the beginning and the end and is used to connect with the world around us.
Shanti – Translates to “peace.” Often chanted at the beginning or end of a practice to ignite peace within the world and ourselves.
Namaste – translates to “the light within me honors and respects the light within you.” Chanted at the end of a practice to recognize the light within yourself and others.