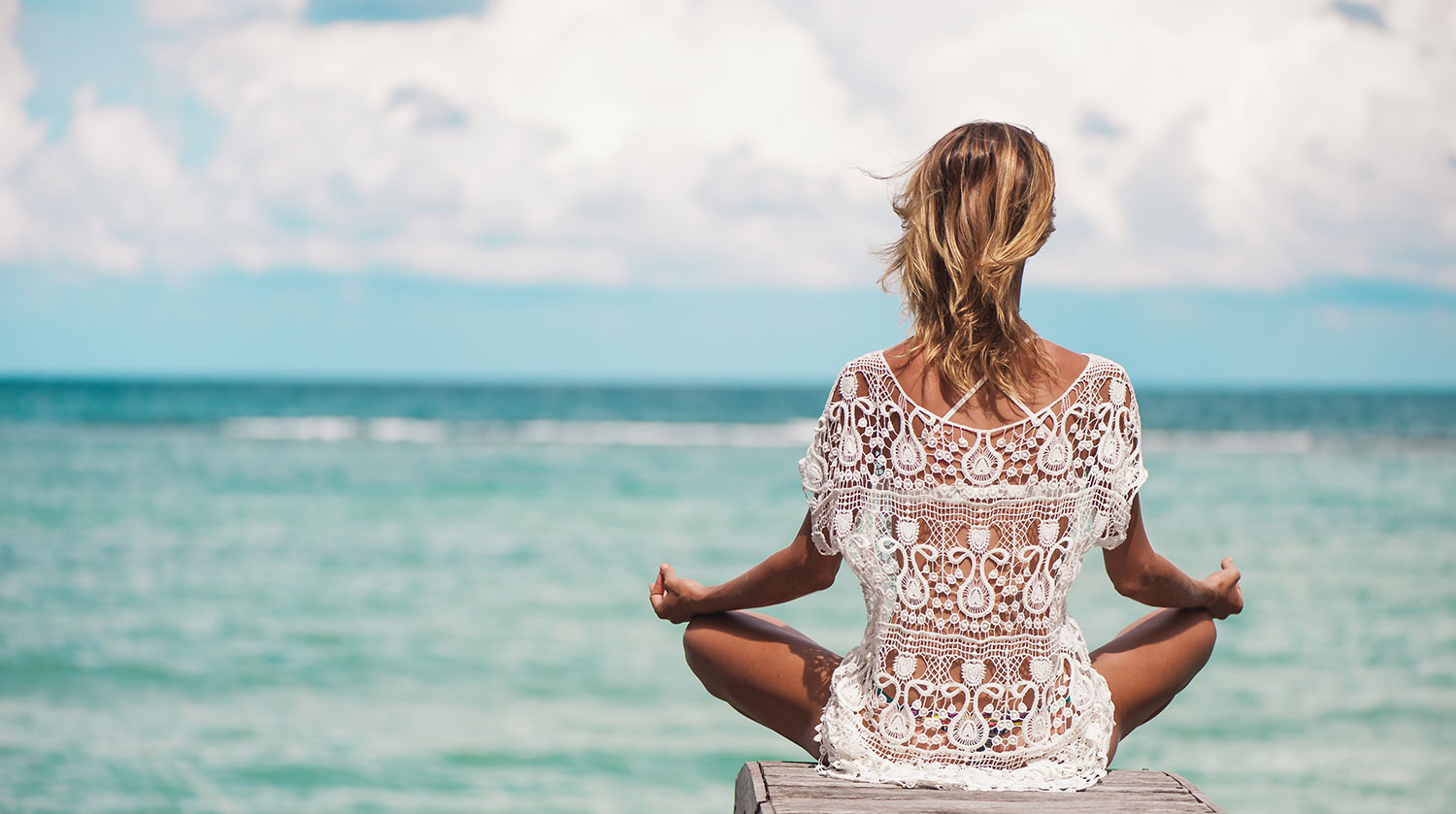 What is Ahimsa and How to Practice It in Everyday Life

If you want to take your yoga practice off the mat and into the real world, the best place to start is by studying the eight limbs of yoga. These teachings, which are known as Raja Yoga (or Royal Path Yoga), were gathered in the Yoga Sutras by Patanjali sometime between 200 BCE-200 AD. These ancient teachings essentially provide a blueprint for how to live life without suffering. As expressed in this article, The Eight Limbs, The Core of Yoga by William Doran, the eight limbs of yoga provide a “structural framework for yoga practice” and “no one element is elevated over another in hierarchical order”.

The first two limbs of yoga are the Yamas and the Niyamas. These principals are broken down into smaller categories that speak to a person’s social qualities and actions in daily life.

In Sanskrit, the word “Yamas” means “restraint from actions, words, or thoughts that may cause harm”. In general, the yamas speak to one’s social ethics, and according to Patanjali the most natural state for a person is to be compassionate, honest, and peaceful. There are five yamas total, as listed below along with their meaning. Ahimsa means “nonviolence, non-harming other living beings”. While this seems very simple, ahimsa can be interpreted a lot of different ways. Some yogis believe this means you should be vegan or vegetarian, while others argue if your personal constitution requires eating meat, then it’s the opposite. Ahimsa when applied to yoga also translates to friendliness and thoughtfulness. This means speaking nicely to others as well as yourself, and should be taken into consideration when practicing poses. Make sure you’re being kind to your body and not forcing it beyond its limits.

Satya is the Sanskrit word for “truthfulness”. In yoga, this means being truthful in your thoughts, words, and actions. When you’re committed to truthfulness, you are able to develop healthy relationships that are based in honesty. When practicing satya, you have to be delicate. Sometimes saying nothing is better than saying something harmful, even if it is the truth. Satya forms the basis for healthy interactions with others, so think about what you say and how you say it.

Brahmacharya is perhaps one of the more misunderstood of the yamas. In Sanskrit, the word means “chastity, marital fidelity or sexual restraint”. Most modern teachers don’t believe that brahmacharya means you should be celibate; instead this yama is interpreted as meaning we should use our sexual energy to move closer to the truth and to further our connection to our Spiritual self. As described on Gaia’s website, brahmacharya means “[using] your energy wisely and with intention; [avoiding] excess or overindulgence”.

Asteya is perhaps one of the most straightforward of the yamas, and it means “non-stealing” in Sanskrit. Asteya is perhaps one of the easier yamas to embrace because it is fairly simple – don’t take anything that doesn’t belong to you. This could mean abstaining from taking pens from work or not taking more than your share at a dinner party. According to the article, The Eight Limbs, The Core of Yoga by William Doran, this can also mean, “fostering a consciousness of how we ask for others’ time”. Doran argues, “Taking another’s attention when not freely given is, in effect, stealing”.

Aparigraha means “non-possessiveness” in Sanskrit. In modern yoga, this is interpreted as neutralizing the desire to hoard your wealth and possessions. When practicing aparigraha, you would take only what you need and nothing more. Taking more than what you’ve earned means exploiting another person; when you embrace aparigraha you may realize that change is the only thing constant in life!

Unlike the yamas, which focus on one’s social ethics, the niyamas are like laws that every yogi should live their life by. In Sanskrit, the word “niyama” means “positive duties or observances”.  The niyamas are fun to enact because they do give a spiritual context to activities that sometimes seem mundane. Adopting these principles in your life can help your existence feel more peaceful and meaningful. Washing the dishes is no longer a silly chore if you think of it as union with the divine!

The meaning of sauca is “purity, clearness of mind, speech and body”.  The principle of sauca can be embraced from the inside out. Practicing sauca could mean a lot of different things for you externally – it could mean keeping your home clean and tidy, taking your shoes off before coming inside, and also bathing and keeping your body clean. Additionally, sauca can mean that you regularly do the practices that keep your body free of toxins, like cleansing, doing pranayama, and practicing asanas.

In Sanskrit, the word “santosa” means “contentment [and] acceptance of others and one’s circumstances as they are”. It can be a little difficult to imagine what exactly that means, but in general it is referring to an innate sense of acceptance for what is. When practicing santosa, you might feel content with the way things are even through life’s challenges. In short, you should try to feel happy with what you have in the present moment.

In Sanskrit, tapas means “austerity, self-discipline, persistent meditation, [and] perseverance“. This means that no matter what happens, you keep moving forward towards your goals with 100% effort. In this article by Do You Yoga, author Jacqueline Buchanan describes tapas as “the disciplined use of efforts”. She claims that for her, an example of tapas is picking a goal and sticking to it. Additionally, tapas is also referring to the general heating and purifying of the body through asanas and meditation.

Svadhyaya means “self-study” or “self-reflection” in Sanskrit. When looked at through the lens of yoga, this niyama encourages students of the eight limbs of yoga to turn their gaze inward. There are benefits to looking at your self truthfully. As your self-awareness grows you might learn what your limitations are and either accept them or push their boundaries. There are a lot of ways you can practice self-study. One way is through meditation, which has been scientifically proven to decrease negative self-thoughts and produce a clearer perspective in life. Another way is by writing in a journal or taking a self-help course.

Ishvara Pranidhana is the fifth and final niyama, and it means “contemplation of God”. Some other translations list the word “Brahman, True Self, Unchanging Reality, and Supreme Being” instead of the word God, but one thing stays the same; Ishvara pranidhana is the practice of tuning in to an energy that is greater than oneself. Through the practice of ishvara pranidhana you might feel a larger connection to source energy and bring your consciousness up to the highest vibration it can achieve.

When most people think of yoga, asana postures like downward-facing dog and child’s pose is what they’re imagining! As you can see, asanas are just one part of the eight limbs of yoga, and when Patanjali wrote the Yoga Sutras, the main asana he was actually writing about was the meditation pose. In Sanskrit, the word “asana” means “body postures“. The purpose of asana in the eight limbs of yoga is to create a union between the breath, body, and spirit. Moving the physical body with asana postures helps a person clear their mind and prepares the body for meditation. When practicing asanas, you should aim to bring balance to the body. This means working out your weaknesses and exploring the full scope of your strength, flexibility, and freedom within your physical body.

When it comes to pranayama, breath is life! Pranayama literally means “extension of the prana (breath or life force” in Sanskrit. Pranayama is the measured control of your breath as it goes in and out of your body, otherwise known as breath control. As stated in this article by Yoga Journal, pranayama techniques are “designed to gain mastery over the respiratory process while recognizing the connection between the breath, the mind, and the emotions”. Intentionally connecting to the breath for the first time can be very moving; one of the first parts of the body to tense during times of stress is the diaphragm. When you tap into your breath, stored emotions can be released for powerful healing.

In Sanskrit, the word pratyahara means “withdrawal of the senses“. Sometimes pratyahara is referred to as the forgotten limb of the Yoga Sutras. Just like a turtle retracts into it’s shell to withdrawal from the world, practicing pratyahara means creating a safe container to be in silence and quiet contemplation. Have you ever rushed off your mat without letting your practice fully sink in? One of the best ways to practice pratyahara is to allow yourself the time to practice corpse pose after a yoga session. Taking this time can improve your mental well-being and prevent you from drowning out life with distractions.

The final three limbs of yoga are often muddled together, but they do have distinct differences. Dharana is the “immovable concentration of the mind“. Many people think of dharana as the purpose of meditation; when you meditate you focus your mind on a single point and continually realign to that point no matter what thoughts come forth. The act of dharana conditions of your mind; instead of reacting to everything that comes into your thoughts, this yoga sutra encourages students to focus on one point. Over time, the other distractions fall away. As you continue a steady yoga practice, dharana gets easier and openings for happiness, peacefulness, and contentment arrive.

Dhyana means “worship” in Sanskrit, and this limb of the yoga sutra most relates to meditation. In meditation, there comes a point where all of the scattered thoughts fall away, and your consciousness is totally absorbed in oneness and awareness. Your mind becomes a witness to itself, rather than a reactionary tool that controls your emotions. In this state, it is thought that reality becomes unreal. “Meditation becomes our tool to see things clearly and perceive realty beyond the illusions that cloud our mind”.

The eighth limb of yoga is Samadhi, which is “union with the divine“. This is the ultimate goal of practicing yoga; otherwise known as union with our true self. In this state of mind, your consciousness is merged with the divine and there is no separation. What is so beautiful about the eight limbs of yoga is that it doesn’t look to morph a person into something they are not. Instead this process is meant to strip away untruths and help every person get in touch with their true inner nature and connect with source energy. This is thought to be a state of total health and is accessible to anyone.

What is Yoga Therapy? Explor...