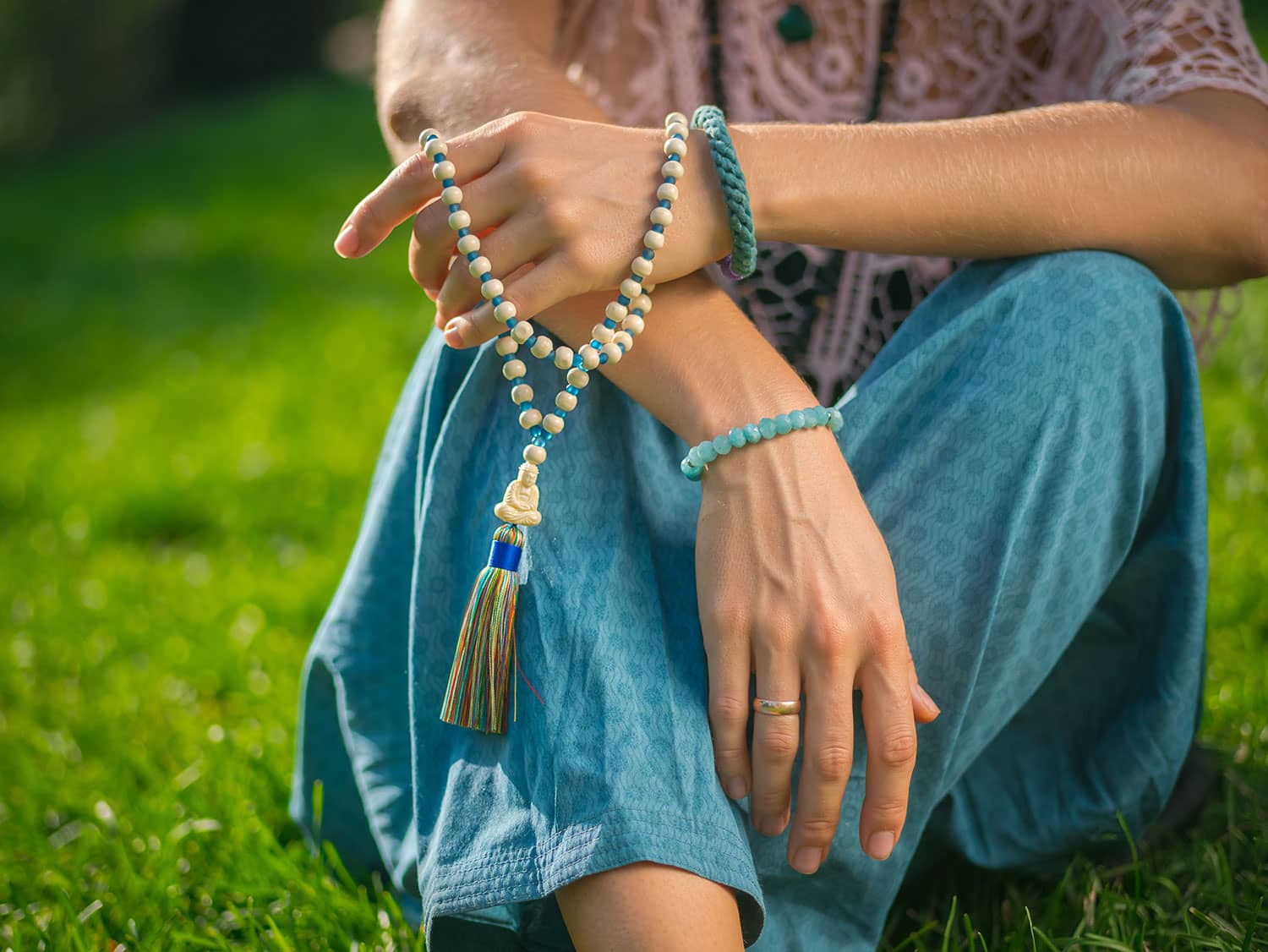 They have become fashionable accessories to those who practice yoga. But there is so much more behind the string of beads known as a mala. They are important tools for meditation and respecting the lineage of wisdom behind different spiritual practices that use them.

Hindu and Buddhist monks wear malas around their necks or on their wrists. Some sects believe that a monk only wears a visible mala once they have mastered how to teach meditation.

Others believe that a mala must only be given by a guru to a disciple as a blessing to continue practicing and share their teachings.

Even religions outside of the Indian subcontinent have adopted their own versions of malas for prayer, meditation, and contemplation.

Learn how to use and care for you mala for your regular meditation practice and see how these simple beads can deepen your spiritual life.

What is a Mala

A mala is usually worn as a necklace. It is a continuous string made of 108 beads. Many have a tassel at the end.

The Sanskrit word, “mala,” means garland. This garland of beads is used as an aid for meditation or prayer.

The oldest malas come from India and Nepal where meditation traditions have been practiced the longest.

Malas were originally garlands of flowers. Ever since ancient times, flowers have been used to adorn sacred and religious sites, figures, and even put around people’s necks as a way of welcoming or celebration.

Even all around India today, street shops of flower garlands may be found to purchase offerings to leave at temples.

In modern postural yoga practice, the pose, Malasana, is directly translated as “garland pose.” It is a full yogic squat. Some say that the pose is named so because of the semicircular outline shape your pelvis assumes when you are in the full expression of the pose.

Another theory is because your arms hanging around your neck and joining at your palms in front of your heart into Namaste Mudra resemble a mala.

Parts of A Mala

Every part of a mala has special significance. Whether it is the type of beads used, the color of the string, the groupings of the beads… all have different meanings depending on the intention of the mediator.

Most beads for malas are made of organic, natural materials such as wood, seeds, clay, or precious stones. But modern malas have also been manufactured out of plastic, resin, or a mix of synthetic and natural materials.

For many, the material the mala beads are made out of makes a difference in the subtle energy of the mala. Some gurus will not recommend malas made out of amethyst, for example, for a student who needs more grounding.

Popular materials for japa mala beads for meditation are crystal quartz, which has a neutral yet purifying effect; sandalwood or tulsi (Holy Basil) which are holy woods in India; Bodhi tree seeds; or Rudraksha seeds.

The Upanishads are a collection of spiritual stories from the ancient vedas of India. They were originally passed down through generations in an oral storytelling tradition and slowly were compiled into a text in and around 1400 C.E.

Here is one story from the traditional tales about the significance of Rudraksha tree seeds (Elaeocarpus ganitrus) and why they are used as mala beads.

The story goes that when the great demon, Triputra, terrorized the earth, all the gods took shelter with Lord Mahadeva – another name for Shiva.

Shiva had a powerful weapon called the Aghora. But to use it, to defeat Triputra, he had to close his eyes and stay extremely focused and concentrated to summon it. The weapon represents total divine strength.

Because his eyes had to stay shut for so long, drops of water began to ooze out and fall onto the earth. Every place these tears fell, grew a special tree.

In time, the trees bore fruits and seeds. These seeds were called the eyes of Shiva – Rudraksha. There are numerous types and varieties of Rudraksha seeds and each has a very deep and spiritual meaning, especially to Shaivites – devotees of Lord Shiva.

It is said that those who wear Rudrakshas will earn great merit.

In order to receive these merits, you must follow certain practices:

In addition, when you make a mala out of Rudraksha beads, make them in strings of 108, 50, or 27. Chant the holy names to ensure they will help you and you will earn their merit.

According to the story in the Upanishads, you must wear your mala on your body during times of eclipses, solar transitions, full-moon days, moonless nights, and other holy days.

More Stories on the Importance of Mala Meditation

In Buddhist tradition, a story from the Mokugenji Sutra, written around the 4th century B.C.E. tells of how King Haruri sought counsel from SIddartha Gautama Buddha. He asked how he could share the Buddha’s teachings and wisdom with his people.

According to the story, Buddha replied:

“King, if you want to eliminate earthly desires and put an end to their suffering, make a circular string of 108 beads made from the seeds of the Mokugenji tree. Hold it always to yourself. Recite: “Namu Buddha – Namu Dharma – Namu Sangha.” Count one bead for each recitation.”

The Mokugenji tree is also known as the Goldenrain tree (Koelreuteria paniculata) from the Soapberry family.

The number 108 is auspicious in many Hindu and Buddhist traditions.

In vedic cosmology, it is a number that represents the universe and the wholeness of existence. 108 is a number that forms the basis of creation. It is also the number of steps between the self and the divine within you.

In traditional yogic practice, there are 108 holy sites a yogi must pilgrimage to across India, 108 sacred vedic texts, and 108 life force points in the body.

The Sanskrit alphabet is made up of 54 letters, each of which has a masculine (Shiva) and feminine (Sakti) quality. When 54 is multiplied by 2, the total is 108.

According to some Buddhist traditions, there are 108 human passions or defilements of Buddhism which impede your from reaching enlightenment. By meditating 108 times, you can detach yourself from these karmic characteristics and purify yourself.

How to Use a Mala

Most say that japa mala meditation is one of the simplest meditation practices to begin with because it requires no previous knowledge of tradition or initiation to start. You just need a few minutes of time in a space where you can be undisturbed for meditation.

Whether your mala has an overhand knot between each bead, or space to slide the bead over, place your concentration on one bead at a time. Recite your mantra out loud or mentally on this bead, and move to the next one.

Some malas have different groupings or different-sized beads at specific intervals so when you feel that change, it helps to break the monotony of your meditation and help keep you alert and in the present.

Building on this simple foundation, the specifics of mala meditation vary from tradition to tradition. The rules of each spiritual lineage is best learned the old-fashioned way – by learning directly from a teacher or guru.

However, to keep japa meditation simple as a beginner, you can hold the mala in your dominant hand in whichever way feels most natural for you. Sit with your back straight and eyes closed if possible.

Remember, the mala should be an extension of yourself to help with meditation, not to hinder you with all sorts of do’s and don’ts. Any rules which follow specific traditions may be incorporated into your sadhana, or spiritual practice, once you feel ready for more in-depth meditation and mantra study.

Mantras to Meditate With

A popular mantra, especially in Tibet, is Om Mani Padme Hum. Which literally translates to, “Praise to the Jewel in the Lotus.”

According to Dilgo Khyentse Rinpoche, this is a simple mantra which anyone can pronounce and practice easily, yet it encompasses all the Buddhist teachings in one verse:

A third powerful and popular mantra is Om Namah Shivaya. It means, “Salutations to the Auspicious one,” or “I bow down to Lord Shiva.”

This is an ancient mantra that can be found in the Yajur Veda which was written between 1200 to 800 B.C.E. The text is made up primarily of prose for worship and rituals.

Rishis of India have further broken down the mantra into the five elements present in the syllables:

Which represents that all of existence and consciousness is one Universal Consciousness.

If you’re finding it challenging to stay focused during meditation, the use of a mala can definitely help by giving you a physical object to concentrate on. But if you still catch your mind wandering, here are some tips you can apply to your meditation practice:

Mantra meditation with a mala can be a simple way to start a regular meditation practice. Malas have been tools for meditation for thousands of years and using one links you to a practice that has led many towards spiritual enlightenment.

Intro to the Six Systems of ...