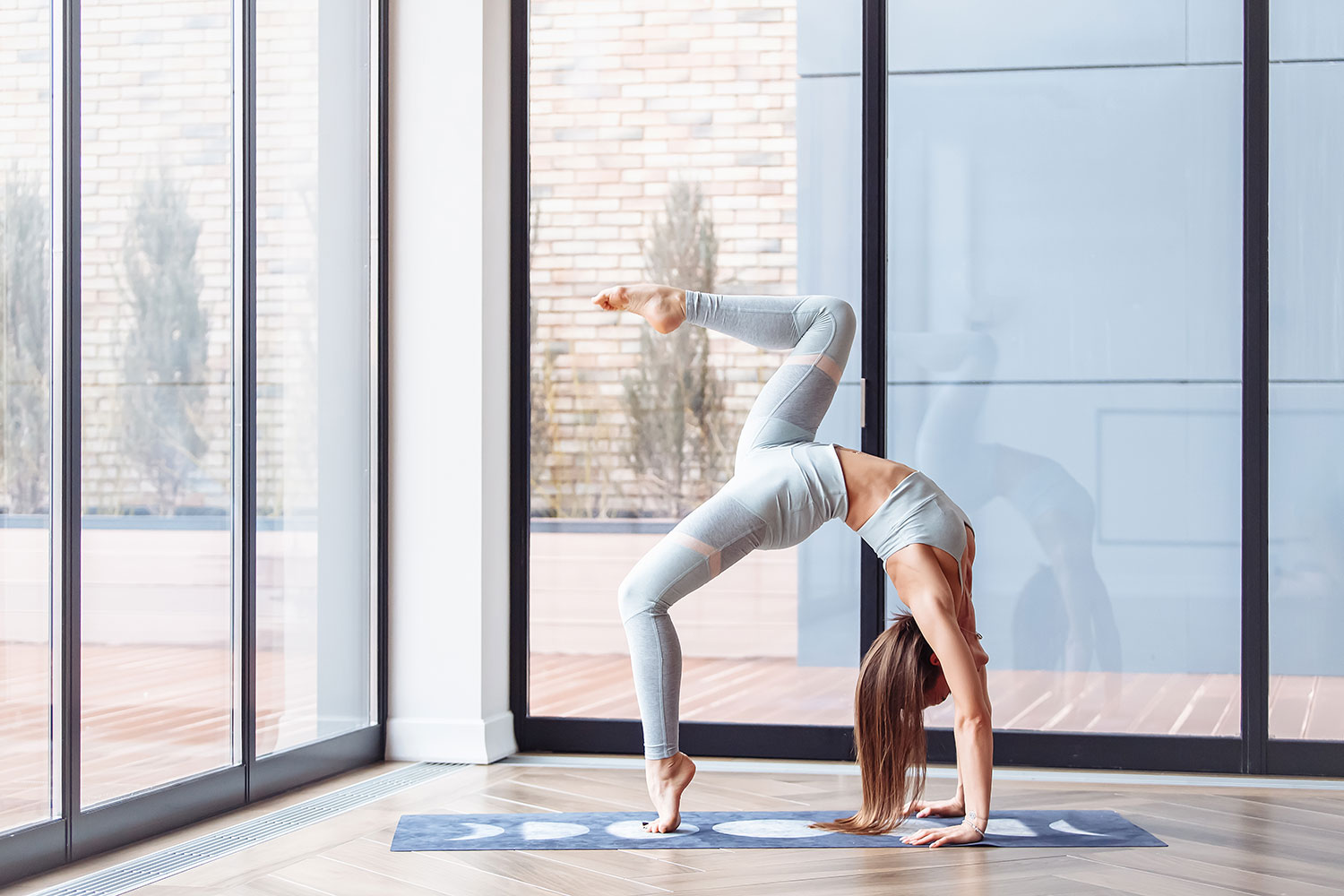 15 Yoga Postures For Back Pain

The language that modern yoga teachers use in class is constantly evolving. While a certain line may have been taught to you in your teacher training program (or heard a hundred times while taking a yoga class), it may not be as effective as once believed. It is important to consistently look at the phrases you are using to see if it is correctly communicating what you are trying to portray. The following cues can be adjusted to enhance your communication with your students, so that they can take the adjustments safely and with clarity.

Pull Your Shoulders Down

Most people carry tension in their shoulders, so this is a cue you probably find yourself saying a lot, particularly in poses like Utkatasana (Chair Pose) or Urdhva Hastasana (Upward Salute Pose). However, the cue can imply that a much harsher adjustment is needed, when in reality all that is needed is a gentle shift.

With this cue, students may shorten the sides of their bodies and bring the humerus bones (or arm bones) forward. These movements can increases the risk of injury, particularly in the trapezius muscles along the back and neck. The upward movement of the shoulders in these poses is natural, so it is unnecessary to completely force them back down. Students need a cue that tells them to let go of tension and relax the shoulders down, rather than forcefully pull them down.

An alternative choice of words can be “soften the tops of your shoulders”, or “keep the base of your neck soft”. These cues are both gentler suggestions, and can help students get a better idea of the adjustment you are making, without putting them at risk of injury or strain.

This cue can find its way into a yoga class through a variety of poses, including Urdhva Dhanurasana (Wheel Pose), Tadasana (Mountain Pose), and Paschimottanasana (Seated Forward Fold). Similar to “pull your shoulders down”, this cue can prompt students to take the adjustment too far. It is meant to signal students to avoid externally rotating their thighs, while encouraging them to keep their hips neutral in poses. However, this cue can be vague, and students may end up rotating inward too much. This overexertion can end up causing issues in the pelvis, hips, and lower spine.

Instead of talking about the thighs, keep the focus on the hips. The cue originally is meant for keeping the hips neutral, so put the attention directly on the hips.

Bring Your Ears in Line with Your Biceps

This cue is common in poses like Urdhva Hastasana (Upward Salute Pose) and Adho Mukha Svanasana (Downward Dog), as it ideally helps to create straight alignment of the head and spine. However, this isn’t a cue that works for all practitioners. For students who have tighter shoulders, this cue can be problematic. By taking this adjustment, these students end up jutting their head forward, bringing it out of alignment with their spine in order to find the positioning with the biceps.

Rather than using this phrase, it is best to focus on cues that will allow students to keep their shoulders in an accessible position, while keeping their head in line with their spine. You can remind students to find length and space in their spines, while maintaining strong arms.

The “square your hips” instruction comes up a lot in a yoga class. In poses like Parsvottanasana (Pyramid Pose) and Virabhadrasana 1 (Warrior 1), where the foot is at a 45 degree angle, guiding the back hip forward to be in line with the front hip can actually cause damage to the knee, as it is taking on an unhealthy twist. It is far more important to keep the knee healthy and properly aligned than to focus on the visual aesthetic of the pose.

In these poses, students should be cued to keep their hips slightly diagonal to avoid this damage, while focusing on spinning the upper torso up. This makes the student put the focus of the pose forward, while still maintaining a healthy space in their hips and knees.

For twisting poses like Parivrtta Ardha Utkatasana (Revolved Chair Pose) and Parivrtta Anjaneyasana (Revolved Crescent Lunge), the cue is just as common. Instructor David Magone says that, despite the fact that teachers have been giving this cue for years, hips don’t need to be squared in these poses. Attempting to square the hips lessens the space between the hips and upper body, and allows more of a chance for injury.

Instead of cueing squared hips, allow students to rotate their hips in the same direction as the twist, as it will deepen the pose while still allowing that space to exist.

Stack Your Shoulders Over Your Wrist in Vasisthasana

Teachers will often check out a student’s joints to see if they are properly aligned. However, in Vasisthasana (Side Plank Pose), this trick isn’t foolproof. In the pose, cueing your students to stack their shoulders over their wrists makes them prone to two other major misalignments: letting their hips droop down and collapsing into their shoulder.

For Vasisthasana, it is best to cue students to put the bottom wrist slightly in front of the shoulder. With this set up, it is far easier to support their body weight and push their hips up higher. At the same time, it will also be harder to cave into their shoulder. While the alignment of shoulders over wrists isn’t necessarily wrong, this slight adjustment will help students avoid larger problems with the setup of the pose.

Guiding students to “tuck their tailbones” is a common cue for poses like Tadasana (Mountain Pose), but it is another instruction that isn’t always useful. For students who do have a curve in the spine that needs to be adjusted, they may take the cue too far and over curve. On the other hand, some students already may naturally have a tuck, so this can guide them out of proper alignment, also causing them to over curve.

Yoga teacher and author Kathryn Budig has said that, while tucking your tailbone is great for creating length in your spine, over tucking will flatten the curve of your low back.

Rather than telling students to tuck their tailbone, she prefers to tell them to release their tailbone as they draw their lower belly upwards. These simultaneous cues helps students get the amount of tuck that they need, without forcing it past their limits.

In poses like Uttanasana (Standing Forward Fold) and Adho Mukha Svanasana (Downward Dog), teachers will often cue students to lift their tailbones. However, this cue can be problematic for a variety of reasons. For one, this movement can be destabilizing for the sacroiliac joint, which connects the sacrum with the pelvis on both sides of the lower spine. The movement can also feel very unstable for students, making them feel far less grounded in the pose.

Instead of telling students to lift their tailbones, it is more appropriate to suggest they move their thighs back and root down through their tailbone, which offers a more grounding sensation.

This line comes up a lot in Tadasana (Mountain Pose) as a way to guide students into a neutral position. However, while this foot posture may be neutral for some students, it may be out of alignment for others. A neutral position is all dependent on the structure of their bones, particularly how their femur comes out of their hips. Parallel may work best for some, while others may need their toes to splay slightly outward to feel supported and grounded.

In order to cue students to their most supportive foundation, tell them to find a grounding stance around parallel position. Stress the importance of feeling supported in their stance, and tell them to listen to their own body cues to feel what foot position is best suited for them.

Imagine You are Between Two Panes of Glass

This visual and Trikonasana (Triangle Pose) go hand in hand, but it can do more harm than good. The cue makes practitioners push their pelvis forward, and yoga teacher and author Amy Ippoliti warns that it also encourages an external rotation in both of their legs. This rotation doesn’t allow the femur to completely sit in the hip joints, which limits range of motion and flattens the curvature of the spine.

Rather than having students envision two panes of glass flattening them, it is best to encourage more of a natural curvature in the posture. Cue students to let the back hip rotate towards the front while the chest turns up towards the ceiling.

With a Flat Back…

The image of achieving a flat back simply isn’t accurate. In reality, our spines do not form a straight line—if they did, the bones would encounter an excess of stress, leading to more wear and tear on the vertebrae and intervertebral discs.

Our spines have a natural curvature, forming an “S” shape. These curves are important for the everyday function of the spine, as they allow for a greater range of motion, can handle the physical stresses we encounter throughout the day, and work to absorb shock as the spine supports our body’s weight.

By cueing students to flatten their backs, they can begin to work against the natural curve of their spine. This opens up opportunities for injury and strain along the spine. While finding space throughout the spine is important, encouraging a flat back can be misleading, and students can take this direction too far.

Rather than aiming for a flat back, remind students to keep the spine lengthened but relaxed. This will help create space in the spine, without creating the visual of a fully flattened back.

The language we use make an impact on the people around us, and it is no different in the yoga classes you teach. Take a look at your go-to cues, and see if there is room for improvement to allow for clearer communication. By bringing awareness to your words, you may be able to elevate your level of teaching and get through to your students in a new way.

How To Protect Your Knees in...