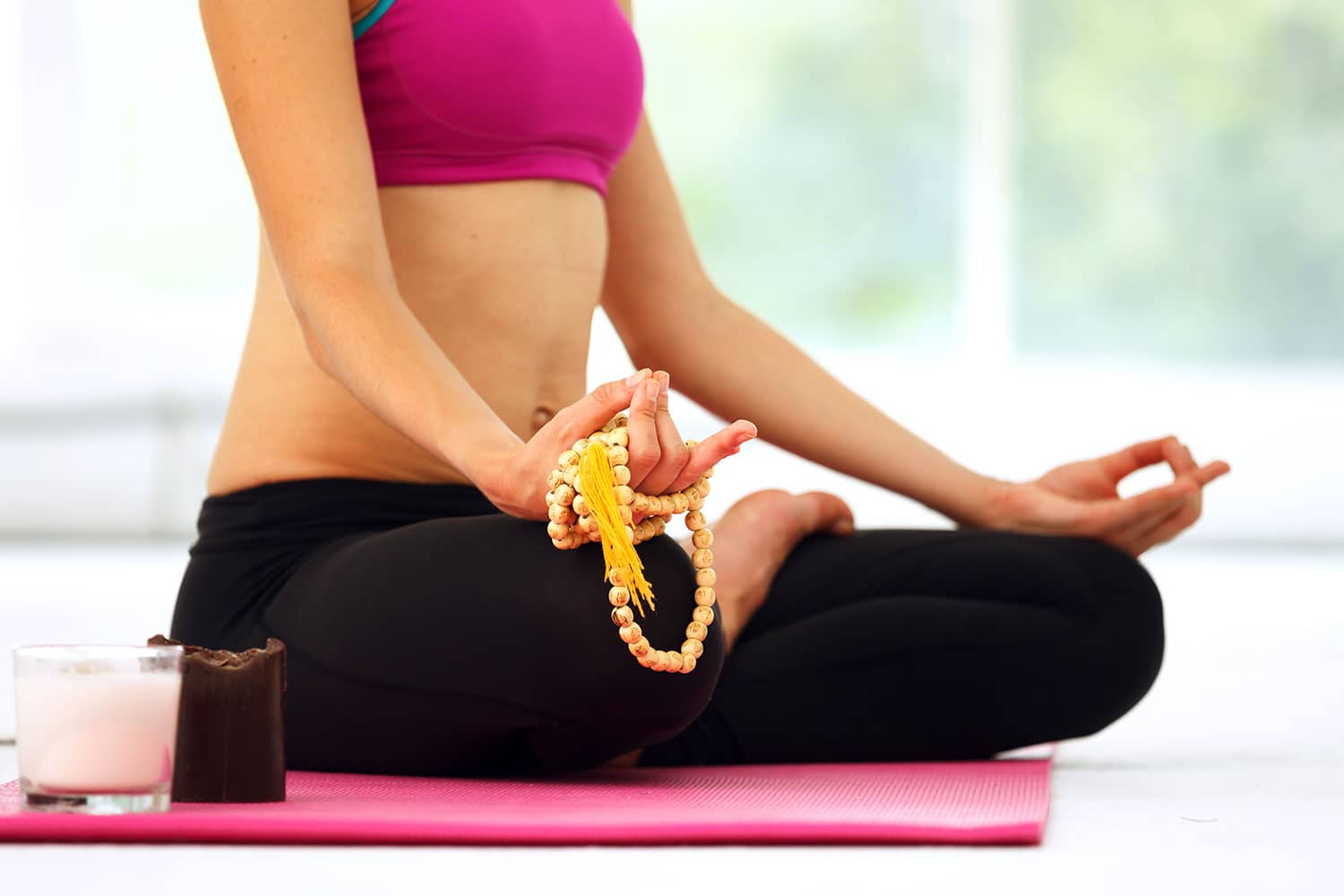 Lauren Howard holds a master certification in reiki, or energy…

Malas are more than just trendy yogi fashion. They have been used as tools towards self-realization for hundreds of years. They are used to aid in Japa meditation where a mantra is repeated 108 times.

With so many styles of malas, it can get a bit confusing how to begin a mala meditation practice. This guide will tell you everything you need to know about malas, how to choose your own mala and take care of it, and how to get started meditating with a japa mala.

What is a Mala

Mala in Sanskrit is translated as “garland.” A japa mala are garlands of beads used for meditation.

They are made of strings with 108 beads plus one larger bead at the end. A tassel is usually attached to the end too.

Malas can be made with Rudraksha seeds as beads. In India, especially those who follow Shaivism, they believe that these Rudrakasha are the tears of Shiva.

Other materials that mala beads can be made of are different kinds of wood, precious stones, and metals..

Interestingly, the English word “bead” evolved from the Middle English word which means prayer. The shift in the meaning of the word came about with the development of the Catholic rosary where each bead on the string is used to count a particular prayer.

Even though many now wear malas as a fashion accessory, this is not a modern phenomenon. As far back as the Ming Dynasty, malas were already used by the Chinese court as an accessory.

Prayer Beads Around the World

Most yogis wear malas which have 108 beads. This is an auspicious number in many Eastern traditions. There are numerous theories why this is so, including simple to complex mathematical equations.

Suffice it to say that 108 is so important, that many spiritual practices including Hinduism, Buddhism, and Jainism consider this a sacred number.

A Japa Mala has 108 beads plus one bigger bead called a guru bead to help you meditate 108 times. But other religions and cultures have strings of beads used to help count prayers or meditation.

Roman Catholics count prayers on a string of beads called a Rosary. This consists of 5 sets of 10 prayers for the Blessed Virgin Mary, mother of Jesus Christ. Between each set of 10 are separator beads which signify where to pray The Lord’s Prayer and a Glory Be prayer.

A set is called a decade. And on each day of the week, the rosary is used to remember a different part of Jesus’ life.

The end of the rosary has four beads and a cross depicting the crucifixion.

Protestant Christians also have their own version of the Rosary which consists of four sets of seven beads.

Seven is a significant number for the Christian and Jewish faiths. They believe that God created the world in seven days and the Church calendar has seven seasons.

Each set is called a week and are separated by cruciform beads. At the end of the string is one invatatori bead and a Christian cross.

Islamic prayer beads are called tisbah or misbaha in Arabic. Indian Muslims call their prayer beads subha. These strings contain 99 beads which signify the 99 names of Allah as revealed in the Quran.

According to Abu Huraira, who was one of the companions of the prophet Muhammad, if you memorize all 99 names, you are sure to enter heaven.

Parts of A Japa Mala

Even a japa mala can be made with different styles. Some have overhand knots between each bead, others may have adjustable knots so that the beads slide while counting, and others may or may not have a string tassel at the end. These are the most common elements found in japa malas:

The guru or meru bead at the end of a mala is the biggest bead on the string. It can also be made of a different color and material than the other beads.

It is not counted towards the 108 beads for meditation. When you are using your mala during closed-eye meditation, having a bigger guru bead will help you feel when you reach the end of your meditation.

As previously mentioned, 108 is an auspicious number. Some malas can be made with multiples of 9 for a shorter version.

Usually, these beads are used to help count 108 prayers or mantras while meditating.

Most malas are made with a continuous string with a knot between each bead. These knots make the mala more secure so that the beads won’t all slide off if the mala ever breaks. They also help preserve the beads since they won’t rub against each other constantly.

Some malas will have spacer beads in between each bead instead of knots.

The malas used in many Buddhist sects don’t have knots between each bead. Instead, their malas are adjustable in length so that the beads easily slide a few centimeters to the other side. The sound made by the beads when they hit each other is also an important part of meditation in some sects.

Some malas will have extra little beads after 27 beads (or at other intervals). This has a dual purpose. Some say that the difference in the shape of the bead helps keep you alert and aware while meditating.

Others also say that this is a useful place to stop meditating and remember to resume your meditation at a later time.

A tassel made of silk or cotton may be attached to the end of a mala. This is a talisman that represents your connection to your highest truth.

A tassel can also resemble the roots of a lotus which is often referenced in yoga practices. Without mud, no lotus.

But some malas may also simply end with a guru bead, a knot, three decorative beads, or a charm of a symbol that is meaningful to you.

Choosing Your Mala for Meditation

Many people say that a mala must be blessed and given by a guru. But there is nothing wrong with also purchasing or making a mala that will have special significance to you.

With so many styles of japa malas available, here are a few factors you could take into consideration when choosing a mala.

Semi-precious stones and crystals have healing properties which lend well to a mala meditation. Clear Quartz for example can help you cultivate clarity and connection to the divine.

Jasper, especially red jasper mala beads, have a grounding effect and can help connect you to your root chakra.

Amethyst is another popular stone that can energize your crown chakra.

Beads made of wood and other organic material also have special significance. Many traditional japa malas from India are made from Rudraksha seeds which are important to devotees of Shiva.

Devotees of Lord Krishna may have japa malas made of Tulsi, also known as Holy Basil.

You can look up the qualities of various stones and wood to see how they can help you.

The best way to choose a mala is to follow your natural intuition. Use your personal aesthetic and preference for colors, texture, and materials used to make a mala.

Sometimes, you may even be surprised to see yourself drawn to a mala with colors you don’t normally like. Trust this intuition and you may find that when you research the stones afterwards, they are exactly what you need.

How to Wear a Mala

Many people wear their japa malas like a necklace or a bracelet. But you may hear from more strict and traditional meditators that malas should not be worn like jewelry. Instead, they should be kept in your pocket or on a special place on your altar or sacred place.

But there isn’t really anything wrong with wearing your mala around your neck or on your wrist. You will find many Buddhist monks or Indian Sadhus (holy men) wearing their malas this way.

In some Buddhist sects, malas are always worn on the left wrist. And in other sects, a monk would only wear a mala visibly on their neck if they have mastered how to teach meditation.

Your spiritual and meditation practice is your own, and so is you mala. So it is up to you to be as strict with the teachings of your chosen path, or you may also follow your own personal path.

How to Meditate with a Mala

A japa mala is primarily a tool for meditation. The most common way to use it is to sit with your mala and place your index or middle finger and thumb on the first bead after the guru bead. Recite your mantra, and move on to the next bead.

Your eyes may either be open or closed.

While this type of meditation requires you to set aside a few minutes daily, others also use their mantras to count their mantras as they go about their daily business.

You will often see Tibetans walking the streets of Dharamsala in Northern India reciting their mantras with their prayer beads in hand at all times of the day.

Suggested Mantras to Use with your Japa Mala

A mantra is usually a Sanskrit verse or phrase. But it can also be a phrase or word in any language that has special significance to you.

These are some of the most common mantras that are used for japa mala meditation.

This mantra is very popular among Tibetan Buddhists. The literal translation of each word is simply: OM (a sacred sound); Jewel; Lotus; Enlightenment.

The standard translation means: The Jewel is in the Lotus.

This is one of the most important and well-known of all mantras and saying it regularly will help make you compassionate and reach Buddha-hood.

This popular mantra is called a Panchakshari Mantra. It has five syllables: na-ma-shi-va-ya, preceded by the sacred sound, OM.

It is a special mantra to all who use it for meditation, and in particular for Shaivites, because it gives salutations to the Lord Shiva.

But because Shiva is a personification of Pure Consciousness, the meaning of this mantra is really, “I honor the divinity within myself.”

Your mantra or affirmation for your meditation practice can also be as simple as saying the sacred syllable, OM.

This sound vibrates at the frequency of the universe and begins many mantras and vedas. It represents Brahman, the omnipotent, omnipresent source of existence. The sound OM helps you to conceptualize the unknowable.

The syllable is made up of three sounds: A-U-M. To make this sound, you open your mouth wide to sound out “Aaa.” Then slowly start to bring your lips together to form the sound “Ooo.” Finally, the syllable is sealed with the sound “Mmm.”

An important part of this syllable is the silence that comes after the sound when it is completed.

Meditating with a japa mala can be an important part of your daily spiritual practice. Even just wearing it or keeping it with you can help remind you of what is important to you.

Many religious and spiritual traditions all over the world have their version of these strings of beads. And just like malas come in many styles, the mala you choose can also be as unique as your own spiritual practice and needs.

Lauren Howard holds a master certification in reiki, or energy healing, and has been practicing yoga for over 20 years. She began freelance writing as a means of spreading her truth and knowledge with a broader audience.

Tips on Taking a Vow of Sile...

How to Use a Meditation Bowl...