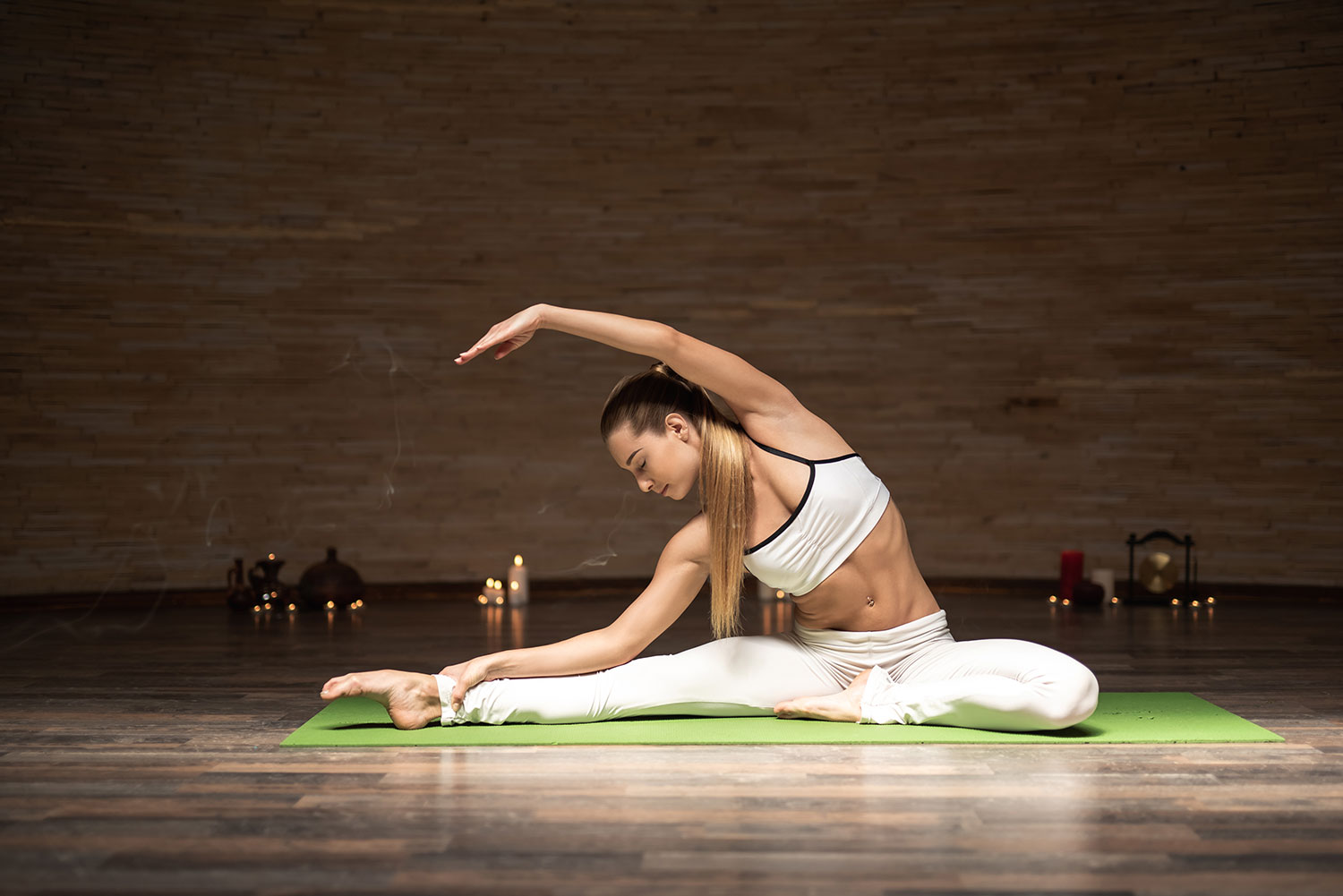 Does Yoga Build Muscle? Poses to Replace Strength Training a...

The yoga that we practice today is very different from ancient yoga. In fact, they are so different that ancient yoga is often referred to as “yogic practices.”

Yoga as we know it didn’t come along until recently–the 1960s, to be exact. The journey from ancient stone tablets to modern yoga studios is an interesting one.

1. No One Knows Exactly When Yoga Originated

There isn’t a simple answer for the age of yoga. The first hint of yoga was recorded on stone tablets that are 3,500-5,000 years old. The tablets were found in eastern Pakistan, in the ruins of the ancient city of Harappa. A figure in a seated meditation pose is carved into the tablet.

This is widely considered to be the first evidence of yogic practices. These elements reflect yoga’s origin as a philosophy. The ancient yogic lifestyle was a variety of physical, mental, and spiritual practices. Around this time, the Rig Veda was written–the first text to contain the word yoga.

Traces of modern yoga first appeared in texts like the Bhagavad Gita and Patanjali’s Yoga Sutras. The sage Patanjali is thought to have lived about 2,200 years ago, but no one knows for sure. Elements of modern yoga, like breathwork and mindfulness, are part of the Yoga Sutras.

2. Northern India Is (Probably) the Birthplace of Yoga

The Harappa tablets and other ancient texts are from modern-day northern India. Over thousands of years, yoga developed in India. It spread first to nearby countries and eventually to Europe and the U.S.

The Harappa tablets and other ancient texts are from modern-day northern India. Over thousands of years, yoga developed in India. It spread first to nearby countries and eventually to Europe and the U.S.

We know from ancient texts like the Bhagavad Gita and the Yoga Sutras that the earliest yogis and gurus lived in India. Yoga evolved over hundreds of years and spread across India. Yogic philosophies developed in South India, East Asia, and Tibet during the middle ages (around 500-1500 years ago).

The influential teachers who brought yoga to the west were all from India. Hindu teacher Swami Vivekananda toured Europe and the United States in the 1890s. He introduced yoga to the west for the first time

In the 1960s, global travel became easier, allowing yogis from India to share yoga with the rest of the world. Modern yoga teachers like Krishnamacharya, B. K. S. Iyengar, and K. Pattabhi Jois spent their lives in India before visiting the United States.

Today, more than 300 million people practice yoga around the world. Yoga is wildly popular in Canada, the United States, Singapore, Australia, and India.

The first two periods are centered around ancient Hindu scriptures called the Vedas. Little is known about yoga in pre-Vedic time. Stone tablets from the Indus Valley in Northern India show figures in seated meditation poses. This is the earliest evidence of yogic practices.

Many precursors of yoga were developed during the Vedic period. The four Vedas are a collection of Hindu hymns, chants, and worship rituals. One of the texts, the Rig Veda, contains the first known use of the word yoga. It is part of a hymn dedicated to the rising sun god.

However, the Rig Veda does not describe the practice or philosophy of yoga. The Vedas only contain elements of yoga, like breathwork, inner awareness, and postures.

The pre-classical period is defined by more ancient texts, including the Upanishads and the Bhagavad Gita. More yoga elements are described in these texts: karma, Brahman (the ultimate reality), and Atman (the transcendental self). These principles are also a core part of Buddhism.

4. Gurus Were the Original Yoga Teachers

Yoga really began to take form during the classical period, when Patanjali’s Yoga Sutras were written.  A sutra is a collection of proverbs or wise sayings. Patanjali’s writings describe the philosophies and practices of yoga.

During this time, yoga was an individual practice between a student and their guru. Gurus are teachers who have a very close relationship with their students. They are considered to be spiritual guides, teaching both the philosophical and physical practice of yoga. The Yoga Sutras were most likely written to be taught by a guru.

More familiar elements of yoga began to emerge during the post-classical era. Yoga postures (asanas) and breathwork (pranayama) were incorporated into yoga to clean and purify the mind.

Kriyas were introduced here too. A kriya is a set of exercises, breathing techniques, and sounds or mantras. Kriyas are the foundation of Kundalini yoga.

Hatha yoga, the style of ancient yoga most similar to modern yoga, developed during the post-classical era. It was the first style of yoga to emphasize the physical practice along with breathwork and meditation. In fact, Hatha yoga texts are the first to describe how to get into a pose.

In the Yoga Sutras, Patanjali defined the eight-fold path for living in line with yoga philosophy. The path is called Ashtanga, from the Sanskrit words for “eight” (ashta) and “limb” (anga). The eight limbs are guidelines related to health, morals, self-discipline, and spirituality.

6. Yoga Has Strong Ties to Other Eastern Religions

Yoga’s roots are based on the Hindu religion. Some of the oldest mentions of yoga are in Hindu scriptures. In fact, yoga is one of the six Hindu schools of thought, which are based on the Vedas.

Sanskrit is an ancient Indian language, still used today for ceremonial purposes in Hinduism and Buddhism. Yoga poses all have a Sanskrit name. Pay attention in your next yoga class, and you may hear some: Utkatasana is chair pose, Trikonasana is triangle pose, and Virabhadrasana is warrior.

Over the past decade, there have been efforts to realign yoga with its Hindu roots. No matter what religion you practice, it’s essential to honor yoga’s Hindu traditions.

Yoga philosophy is also part of Jainism and Buddhism. The five yamas are the foundations of the Jain religion. Devout Jainists vow to live by all of these principles.

Meditation is one of the well-known connections between yoga and Buddhism. Buddhism also contains elements of the yoga sutras. Both philosophies believe in karma, compassion, and freedom from suffering.

7. Savasana Is a Mini-Meditation

Savasana is a favorite pose for many, but it’s much more than relaxation. Corpse pose symbolizes the cycle of death and rebirth.

It’s also a great time to meditate, especially for beginners. Laying down on the mat after a challenging yoga class is incredibly relaxing. Since your body is already relaxed, try relaxing your mind too. The eight-limbed path of yoga comes into play here. Shut out all the external distractions–Pratyahara. See if you can settle your thoughts–Dhryana. And sink into a deep, meditative state–Dhyana.

8. Yoga Was Popularized by 4 Famous Teachers

Modern yoga philosophy was introduced to the west in the 1890s. Guru Swami Vivekananda hosted conferences about yoga philosophy in the United States. He also translated Sanskrit texts into English, opening the door for westerners to learn about yoga.

In the mid-1900s, students of the influential yoga teacher Krishnamacharya brought their own yoga styles to the west. This was when yoga took off as a popular form of exercise. Krishnamacharya was well-studied in Hindu philosophy, and he was also creative. He developed yoga asanas into an exercise that appealed to the young, physically active Indians in the 1930s.

Four of his students developed their own styles and taught them in the U.S. Student K. Pattabhi Jois created Ashtanga Vinyasa yoga. Ashtanga yoga is the precursor of power vinyasa yoga.

Student B.K.S. Iyengar’s book Light on Yoga documented over 200 yoga poses, the first work of its kind. This book made it possible for more people to learn and teach the asanas.

Krishnamacharya’s son T. K. V. Desikachar developed Viniyoga. Viniyoga aligns with the Yoga Sutras. It is personalized for every student and taught one-on-one.

Indra Devi was Krishnamacharya’s first female student. She was also his first foreign student. Born in Latvia, she traveled to India after learning about yoga for the first time. She eventually moved to the U.S. and taught yoga to celebrities. Her style was a unique blend of Indian and western cultures.

9. Some Styles of Yoga Have Modern Origins…

There are countless styles of modern yoga. Some are intense exercise: hot yoga, Baptiste yoga, and vinyasa. Others are calming and focus on a deep stretch: restorative and yin yoga.

Vinyasa yoga is one of the most popular styles today. In Sanskrit, the word vinyasa means “to place together in a special way.” In vinyasa yoga, the poses are all linked together. There are smooth transitions between each pose, and the breath is connected to each pose. This style is often referred to as flow because the movements are so fluid.

Hot yoga–where the studio is heated at least 95°–is typically a vinyasa or Baptiste style class.

These styles evolved from Ashtanga yoga, which was developed by K. Pattahbi Jois. Traditional Ashtanga is still popular today.

Slower-paced styles like restorative yoga originated from B. K. S. Iyengar’s teachings. Restorative yoga is designed to relieve muscle tension and calm the mind. In contrast to the fast pace of vinyasa, poses are held for several minutes. The breath is slow and natural.

Yin yoga is similar to restorative. Poses are held for several minutes, but with an element of flow. Yin incorporates smooth, circular motions to clear energy blockages and enhance circulation. Paulie Zink, a student of Chinese healing and martial arts, developed Yin yoga as a way to help the body move fluidly.

Kundalini yoga’s origins go all the way back to the Vedic period. Modern Kundalini was popularized by Yogi Bhajan in the 1960s and 1970s. This style of yoga combines postures, mantra, meditation, and breathing.

10. And Some Are Ancient

Kundalini yoga is both fact-paced and meditative. Its origins go all the way back to the Vedic period. The word Kundalini refers to dormant energy at the base of the spine. Practicing Kundalini yoga is the way to awaken this energy and activate the chakras.

Modern Kundalini was popularized by Yogi Bhajan in the 1960s and 1970s. He based Kundalini yoga on Sikhism, another Indian religion.

The practice is based on a series of Kriyas. These are specific movements and mantras (sounds) that are supposed to prepare the body for the release of energy. Each kriya targets a different part of the nervous system or the mind.

No matter what style of yoga you practice, they have common roots.Modern yoga is a modern creation, but it’s important to honor yoga’s ancient origins.  Read some of these books to learn more about your favorite style. If you learn anything new, share it with us in the comments!

The Meaning and Benefits Beh...