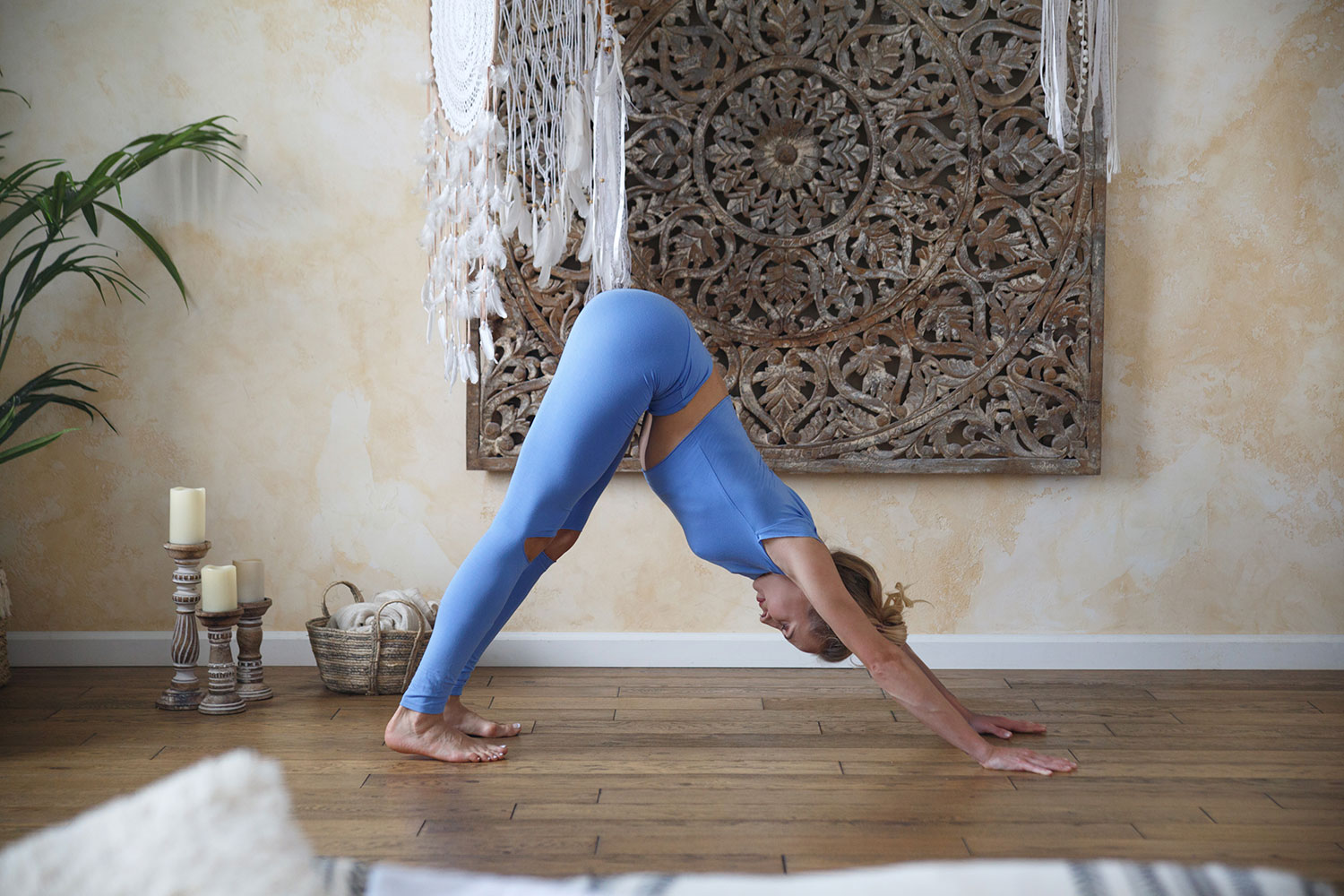 How Often Should You Do Yoga a Week?

To fully understand what the Primary Series is, you must first understand its history. This includes the history of Ashtanga Yoga, where it came from, and what it contains.

Vamana Rishi was the author of the Yoga Korunta. The Yoga Korunta turned into the Ashtanga practice that we know and practice today. There are eight limbs of Ashtanga yoga. Asanas are known as body postures. These are what make up the Primary Series and is limb 3 of the 8.

So what are the poses of the Primary Series? What are the benefits of such a practice? What are some tips for beginners?

It is said that Ashtanga was recorded by a sage named Vamana Rishi. This series of yoga is contained in an ancient manuscript called the Yoga Korunta.

This manuscript contains different groupings of asanas. Asana is another word for body postures. These groupings include the series that make up the practice of Ashtanga.

Vinyasa is the movement from yoga pose to yoga pose. It is regulated by your breathing pattern. You move in and out of poses on your inhales and exhales. Drishti is your focused gaze. This can be very helpful when trying to balance in standing yoga poses.

Bandhas are body locks that move energy throughout the body. There are 3, Mula bandha, Jalandhara bandha, and Uddiyana bandha. Engaging these three at the same time is the Maha bandha.

Mudras are gestures, seals, or marks. Most are performed with your hands. The purpose is to recharge the energy levels inside of ourselves. Each mudra has a purpose that links your brain to your body.

Vamana Rishi is an elusive character. There are no known records of this sage! While Vamana is a common name in India, it’s also the 5th avatar of Vishnu.

Rishi means seer or sage. Its root word is “drsh” which means “to see”.

The legend of Vamana Rishi says that he was born when Ashtanga Yoga had nearly been forgotten. He incarnated himself to bring it back to mankind.

In the 1930s, Sri T. Krishnamacharya traveled to the north of India. His trip was sponsored by Maharajah of Mysore. He aimed to spread the science of yoga for various ailment treatments.

By chance, he discovered the ancient manuscript which was written on palm leaves. The perfectly preserved document was composed between 500 and 1500 years BC.

The author of the manuscript called himself Vanama. Sri T. Krishnamacharya was a specialist in ancient Sanskrit. He recognized that certain phrases came from the older oral tradition. This tradition was popular between 3000 and 4000 years BC.

After this discovery, he teamed up with Sri K. Pattabhi Jois to teach this original method of yoga. They called this method Yoga Korunta and aimed to pass it on. Pattahbi taught this traditional style of yoga in Mysore, India from 1937 on.

Patanjali wrote the Yoga Sutra, “a kind of synthesis of all the preceding knowledge”. His second chapter laid out the foundations of yoga and called them Ashtanga yoga.

Patanjali laid out an eightfold path as a guideline on how to live a life that is meaningful and purposeful. Each limb prepares you for the next. Only once you’ve mastered the first, can you then move onto the second and so forth.

In Sanskrit, the word “ashta” means eight, and the word “anga” means limb. Put these together, you get Ashtanga, the 8 limbs.

The first limb is Yama. There are 5 in total and they deal with your ethical standards and integrity. They focus on your behavior and how we conduct ourselves.

The second limb is Niyama. This covers your self-discipline and spiritual observances.

The third limb is your asanas, the yogic postures. Looking at you, Primary Series! Pranayama is the fourth limb. It translates to your breath control or manipulation.

The fifth limb is Pratyahara. This means withdrawal and sensory transcendence. You make a conscious effort to bring your attention inside of yourself.

The sixth limb is Dharana or concentration. You will learn how to slow the thinking process. You do this by bringing your attention and concentration to a single thought. It can be a silent repetition of a sound, a specific energetic center, or an image of a deity.

This concentration leads into the seventh limb, called Dhyana. This is the uninterrupted flow of concentration. It’s “a state of being keenly aware without focus”.

The last stage of Ashtanga is Samadhi. It translates to a state of ecstasy. As a meditator, you will merge your focus and transcend the Self altogether.

There are six levels or series of Ashtanga yoga. Only when you master one can you move onto the next. The first is the primary series which we will cover shortly.

Mysore is a class style named after Mysore, India. It’s where Sri. K. Pattabhi Jois taught yoga at his institute. It is the traditional method for teaching Ashtanga.

Students practice in the same room together. Each person moves at their own pace with guidance from the instructor on an as-needed basis.

Ashtanga is a physically challenging form of yoga but it’s also “one of the most adaptable”.

While it is quite challenging, there are many benefits to this practice. They include but are certainly not limited to:

The Sanskrit name for the Ashtanga Primary Series is Yoga Chikitsa. This translates to yoga therapy. This series can purify and heal the body. It’s the basis of all the later series containing 41 asanas.

Let’s take an abbreviated tour of The Primary Series!

Note that this is not a comprehensive how-to but rather a brief overview to whet your appetite. Mantra Yoga Meditation created a list of the yoga poses with helpful tips here.

Each session starts with five rounds of Surya Namaskar A and B.

Move onto Surya Namaskar B. This sun salutation is slightly more challenging. It adds Utkatasana and Virabhadrasana I into the mix. In English, Chair Pose and Warrior 1, respectively.

The Primary series features four types of poses. They are standing, seated, a finishing sequence, and The Final Three.

The standing postures section begins with two forward folds. They are Padangusthasana, Big Toe Pose, and Pada Hastasana, Hands Under Feet. Move through Triangle, Revolved Triangle, Extended Side Angle, and Revolved Side Angle.

You’ll continue your journey with two more forward folds. Wide-Legged Forward Fold and Side Intense Stretch. Move to the front of the mat for two more balancing postures. These are Utthita Hasta Padangusthasana and Ardha Baddha Padma Uttanasana. Or in English, Extended Hand to Big Toe Pose and Half Bound Lotus Intense Stretch.

Vinyasas are added intermittently throughout the entire process. They start before and after your Utkatasana, Fierce Pose. Move through Warriors 1 and 2.

The seated postures section starts here with Dandasana, Staff Pose. The sequence moves through a few variations of Paschimottanasana and Purvottanasana. These translate to Seated Forward Bend and Upward Plank Pose. These poses focus on folding and twisting. You’ll move through three variations of Janu Sirsasana (Head to Forward Knee Bend). Then four versions of Marichyasana (Pose Dedicated to the Sage Marichi).

Navasana, Boat Pose is next, five times. Finish the first half of the Primary Series.

From there, you move into a more challenging section containing Crow Pose and jump backs. Followed up with the Kona, angle, family of postures, three in total. Complete a few reclined poses before moving into the finishing sequence.

Nine poses make up the closing sequence. It starts with Salamba Sarvangasana, Shoulder Stand. It ends with Sirsasana B, Head Beyond the Knee Pose. Take a Child’s pose before entering The Final Three.

Finally, you’ll enter into the three closing postures. They are Yoga Mudra, Padmasana (Lotus Pose), and Utpluthih. The practice ends with Savasana, Corpse Pose. Take your rest and let the practice soak into your body.

Check out this cheat sheet here, to see what each pose looks like.

Benefits of the Primary Series

As we’ve covered, the primary series is a healing practice. It resets the body so you can work on a deeper level. It’s for meditation, pranayama, and preparing the body for the advanced series.

Internally, the series targets the digestive system including your liver, gallbladder, and kidneys. It brings balance to both your sympathetic and parasympathetic nervous systems.

Each posture facilitates blood flow to targeted muscles. This causes them to soften and become more flexible. This circulation also flushes out the organs. It forces stagnant energy and toxins to move.

This may seem like a lot to take in. But that’s ok!

Take your time and start small. Move at your own pace.

If practicing in a class setting, you can get individual support from the instructor. The teacher can help you modify the postures to fit your own body and ability. Remember that the sequence is progressive so you must master the previous pose to get the next.

Most importantly — don’t compare your journey to someone else’s! Don’t give up on yourself when it gets hard and surrender yourself to the process.

The history of Ashtanga is quite interesting! It features an elusive author, Vamana Rishi. The manuscript, Yoga Kortuna was written on palm leaves and later rediscovered. This is how Ashtanga was created.

The second chapter of the Yoga Sutra lays out the eightfold path that is Ashtanga Yoga. The limbs are Yama, Niyama, Asana, Pranayama, Pratyahara, Dharana, Dhyana, and Samadhi.

Like the eight limbs of Ashtanga, the practice contains six series in total that build on top of each other. They are the Primary series, Secondary series, and Advanced series. The Advanced series is broken into A, B, C, and D.

Mysore is the traditional method. It is a class where everyone works through the series at their own pace. The instructor is available for guidance as needed.

The benefits of Ashtanga yoga and the Primary Series are astounding. They provide discipline, flexibility, and strength.

Check out a cheat sheet for pictures and tips for each pose.

But remember! Every new journey is a process. With dedication and hard work, you too can work your way through the Ashtanga Primary Series.

See you on the mat!

Should You Use A Yoga Sequen...