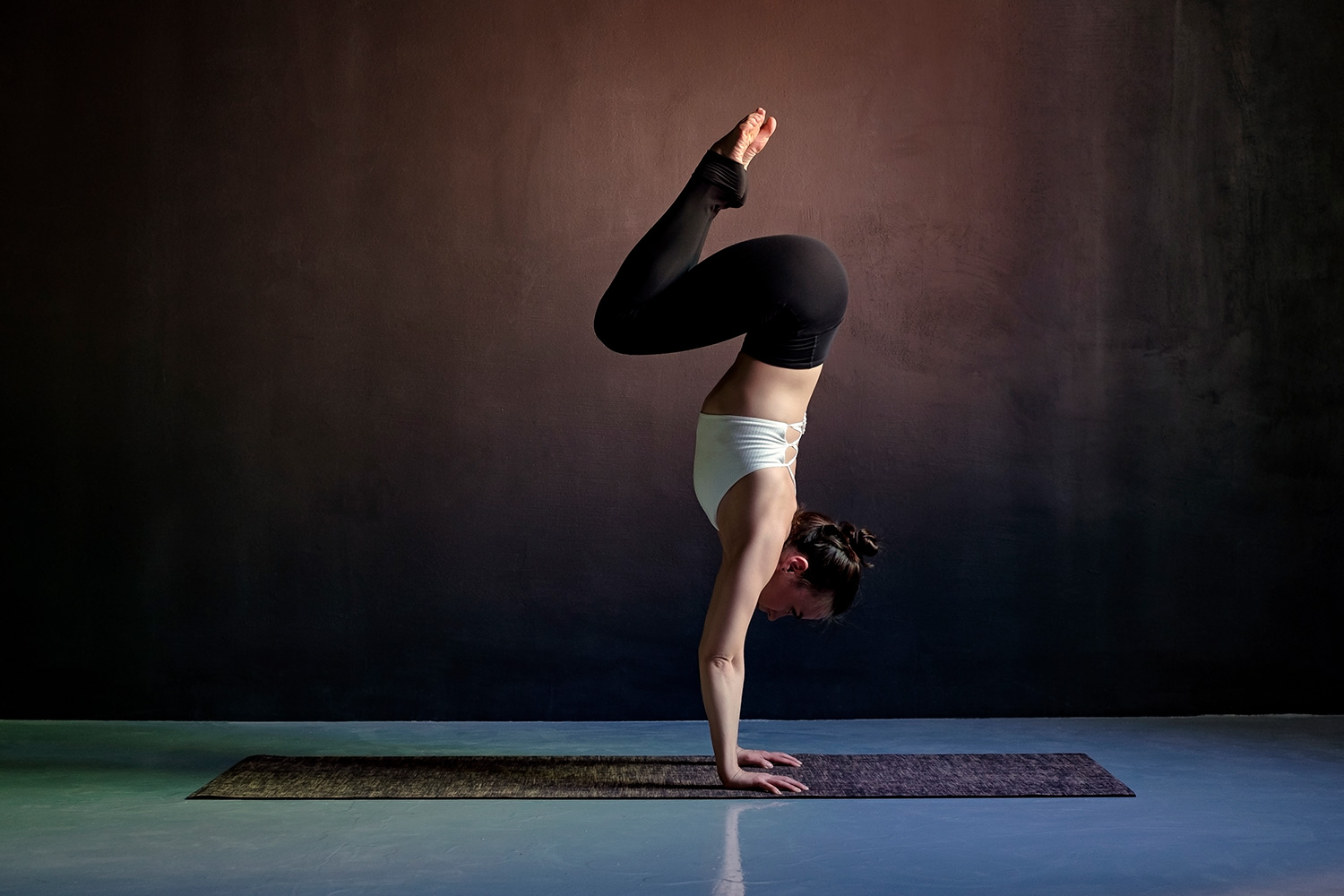 Yoga is a whole body, whole mind practice which is over 5,000 years old. Naturally over its history, different schools and styles of yoga have branched off. There is not one ‘right’ or ‘wrong’ style of yoga, merely which style appeals to you the most at any given time. One of these styles is vinyasa flow yoga, among the most popular styles practiced in the west in modern times. But what is vinyasa flow, why is it so popular, and what are its benefits? Like all styles of yoga, vinyasa flow has its roots in ancient yoga philosophy. It promotes mindfulness, union, and has benefits that reach far beyond the physical body. Vinyasa flow yoga does have its own unique characteristics and specific benefits, though, such as beyond more aerobic and dynamic than other types of yoga. If you are new to vinyasa flow yoga, or want to learn a little more about your existing practice, here are 10 things you need to know.

What You Need to Know About Vinyasa Flow

Whether it’s your first time or your thousandth time in a vinyasa yoga class, here are 10 things you may not know about the practice.

The practice of yoga originated in India 5,000 years ago. As such, yoga terminology is originally in Sanskrit, and is often still taught in this original language in order to respect and preserve the ancient history of the practice. Still, though, it is useful to know the English translations of common yoga terminology. ‘Vinyasa’ is a Sanskrit word that translates to “to place in a special way.” What does this mean in relation to the yoga practice, though?

This “placing” refers to the physical placement of the body from one posture to another. Here, we must consider the word “special.” In vinyasa flow yoga, you are not simply plopping your body from one asana into another. A central characteristic of vinyasa flow yoga is that it uses the breath to guide every single transition and movement. So it is the breath that leads the yogi’s body as they “place” themselves into each posture. Consider this sanctity of “placement” as you flow through your next vinyasa flow practice, and notice how the quality of your movement changes.

It is Shorthand for a Specific Sequence

As mentioned, vinyasa flow yoga refers to an overall style of yoga with a trademark breath-led, flowing movement. But chances are if you’ve been to a public yoga class, you may have heard the teacher use the phrase “take a vinyasa.” What follows is then a short sequence involving the transitions from plank, through chatturanga, into upward facing dog, and back into downward facing dog. This language, though, can often be confusing to yogis because it seems that “vinyasa” has a dual meaning.

You cannot have life without breath, and you certainly cannot have vinyasa flow yoga without breath. Many people who are new to yoga don’t realize how integral breathing is to the practice of yoga. For beginners, it is easy to just transition from one pose to the next, not paying attention to breath at all. However, breath is where the yoga happens. Breath creates the union between mind and body, pose and spirit. This is true for no other stye of yoga more than vinyasa yoga.

In a vinyasa yoga practice, the flowing transitions from one pose to the next are guided by inhales and exhales. These are not blindly chosen, either, though. Inhales are matched with poses that elongate and open the body. Exhales are matched with poses that deepen the posture. Just as the breath flows and changes, so will the postures. And if breath becomes ragged or difficult, this is a sign to slow down or find a resting posture such as child’s pose.

What separates vinyasa flow yoga from many other styles of yoga is that it involves continuous movement from one pose to the next. This is, naturally, where the phrase ‘flow’ is derived from. But what does this mean in practice? It makes for a relatively fast-paced, dynamic style of yoga. Once you reach full posture, you are likely immediately on to your next posture without much time to linger. Sometimes, though, a teacher may have you maintain a posture for a few breaths, particularly on your first time through a sequence, in order to educate you and familiarize you with the posture. Keep in mind, though, that this should not be seen as a ‘static’ posture. Instead, cultivate that same sense of continuous movement even when you are holding a posture. Let your breath guide you and help you deepen into the pose. For example, in Virabhadrasana I, or Warrior I pose, you might use your inhale to find more length through your arms as they reach up toward the ceiling. On your exhale, you might work for a deeper bend in your front knee, or more space between your belly and front thigh. This simple mindset change from static postures to continuous movement is what defines vinyasa flow yoga and differentiates it from many other types of yoga.

It Comes From Ashtanga Yoga

Every modern style of yoga can trace its roots the four original styles: Karma yoga, Bhakti yoga, Jnana yoga, and Raja yoga. Vinyasa yoga has its lineage in the school of Raja yoga, which is more commonly known in modern times as Ashtanga yoga. Ashtanga yoga is a set sequence of poses that were set forth by Sri K. Pattabhi Jois in the 1900’s, based on the teachings of Patanjali’s Yoga Sutras. Vinyasa yoga derives its flowing and breath-led movement to the Ashtanga style, but unlike Ashtanga yoga, vinyasa flow does not follow a set sequence. Vinyasa flow yoga also shares the philosophical roots of Ashtanga or Raja yoga. The simplest way to understand the philosophy is by familiarizing yourself with the eight-fold path. The idea here is that there are eight limbs that encompass a holistic yoga practice. The physical poses, or asana, are just one of the limbs. The other limbs include Yama (ethical standards), Niyama (self disciplines), Pranayama (breathing techniques), Pratyahara (sensory withdrawal), Dharana (concentration), Dhyana (meditation), Samadhi (enlightenment).

Vinyasa Can be Spontaneous

As discussed, vinyasa flow yoga is differentiated from its predecessor or Ashtanga yoga because it does not follow a set sequence. Instead, vinyasa flow yoga uses the same flowing style, but the yoga teacher or yogi themselves have the power to decide what poses to use. This means that vinyasa flow yoga sequences can be personalized – to the individual, their abilities, their mood, their energy, the physical or emotional goals, their chakras, and so much more. What’s more, vinyasa flow yoga has the opportunity of being spontaneous. Half way through a practice, you can listen to your body and spontaneously decide what poses or direction to take the rest of your practice in. Ultimately, this encourages the yogi to tune into their body and mind on a deeper level.

Transitions are Where Injuries Can Happen

Many yogis are drawn to vinyasa flow yoga because it has a unique fast-paced and flowing style. However, it is specifically this ‘flow’ between poses that is the most dangerous for yogis. Like any other athletic activity or physical exercise, yoga does put you at risk for injury. To avoid injury, the yogi must educate themselves on a multitude of factors, specifically their body’s unique anatomy, the proper anatomical alignment of poses, as well as transitions.

To understand safe transitions, consider the alignment of the original pose and the landing pose. For example, it is much safer to go from an open-hipped pose to a closed hip pose to a twisting pose, rather than to move straight from and open-hipped pose into a twisting pose. You must break down the anatomy of the transition and find the transition that puts the least pressure and movement on your fragile joints. Understanding safe transitions is integral to a safe vinyasa flow yoga practice, but it takes time. This is why it is important to practice with a trained and certified yoga teacher who understands transitions, and will respect your unique anatomy.

It Can be a Cardio Workout

Vinyasa flow yoga is a particularly rigorous style of yoga. When performed in a dynamic fashion, moving swiftly from one posture to the next, it is likely to build up a sweat. Yoga in general is often classified by the general public as relaxing or calming, but vinyasa flow yoga is stress relief in motion. It is classified as a cardio workout and can burn roughly 500 calories in 50 minutes, depending on your personal age and body weight. This puts vinyasa flow yoga on par with other forms of exercise such as biking and running.

It is Only One of Many Styles of Yoga

There are dozens and dozens of other styles of yoga besides vinyasa. Each style has its own defining characteristics and unique benefits. For example, whilst vinyasa yoga is flowing and dynamic, the Iyengar style is much more precise and focused on the alignment in each individual posture. Yin yoga is extremely slow moving and calming, with one class only including maybe five to ten postures. Still other styles such as Ashtanga yoga or Bikram yoga have their own regimented and set sequences, that are performed in the same order with the same exact breath count every single time.

There is no right or wrong when it comes to choosing a style of yoga. You also do not necessarily have to stay loyal to the same style of yoga forever. Listen to your body, mind, and spirit. Hear your needs and tune yourself into what will best serve you on any given day. Although people often find a ‘favorite’ style that connects with them throughout their lifetime, that doesn’t mean you can’t go to a vinyasa flow class one day, and a yin yoga class the next day.

Every Teacher is Different

When approaching public vinyasa yoga classes, you must understand that every teacher is different. This means that you might go to one class labeled ‘vinyasa flow yoga’ which turns out completely differently to another class labeled the same. Every yoga teacher uses their own unique spirit, style, and education to inform their classes. This isn’t necessarily a bad thing – after all, you want a yoga teacher who is authentic to their unique spirit. For some people, they may prefer finding yoga teachers they connect with, rather than a specific style of yoga. This will take time but finding your teachers and gurus is an important step on the path of yoga.

Keep the previous in mind the next time you step on your mat. You may find this little bit of extra vinyasa yoga knowledge opens up your practice to new possibilities and awareness.

All About Hot Yoga