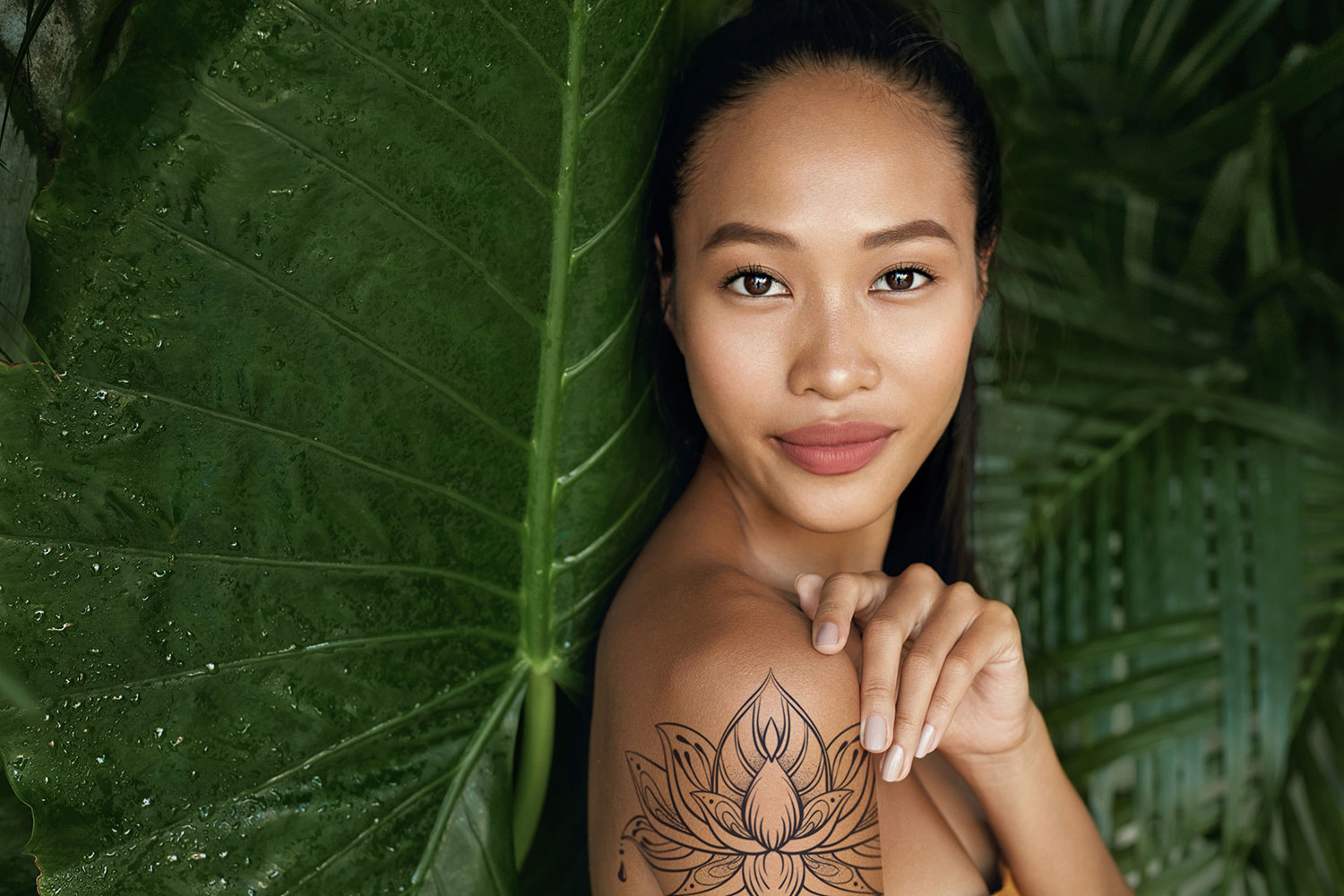 Everything You Need to Know About Goat Yoga

In today’s world, it is more common to see twenty-somethings with tattoos rather than without them. These twenty-somethings are also practicing yoga and familiar with Buddhist traditions, so it’s only natural that many young American adults have some sort of yoga tattoo.

In the past, people would get tattoos because it held some sort of significant meaning to them in their life. Sometimes the tattoo is a literal representation, and others take the symbolic route. Today, more and more seem to get tattoos as decorative pieces of fashion or art. A lot of the time, this is expressed through things like sacred geometry. Sacred geometry is just one kind of tattoo that falls under the umbrella term, “yoga tattoos.”

Regardless of what kind of tattoo you are thinking of getting, the most important thing is that it makes you happy. Below are the top twenty most popular yoga tattoos that people are getting today!

The 20 Most Popular Yoga Tattoos

The tattoos below are in no particular order:

There are many different reasons someone would want to get the seven chakras tattooed on them — or even just one chakra. They hold a powerful spiritual meaning for attaining the perfect human body.

The chakra symbols themselves are meant to open the mind towards healing when focusing on each one. They are believed to be energetically powerful symbols. Therefore, getting them tattooed is said to energetically assist in maintaining a balanced flow of energy.

The Phases of the Moon

The art of yoga teaches yogis to surrender to the natural flow of the universe. You are taught to let go without grasping. Yoga also teaches us how to receive and make space for new things. The flow of the universe is very cyclical, much like that of the moon. That is why many yogis feel some attachment towards the moon and all her phases.

The specific origins of yoga are unknown, aside from the fact that it was developed in ancient India. Yoga has always been correlated with Buddhist, Hindu, and Jainism traditions because of this. That is why when people think of yoga tattoos, many decide to go with a portrait of Buddha. He serves as a symbol of great wisdom and spirituality to those that get him tattooed.

As mentioned above, yoga is widely associated with Hindu traditions. Sanskrit is the old Indic language that a few thousand villagers in India still speak today. The words are said to hold higher vibrational energy because the vocabulary and pronunciation create harmonic frequencies.

Some popular tattooed words include:

The lotus flower has a very spiritual meaning to the yogi. It is associated with spiritual awakening or expansion. The roots secured in the mud represent the earth. The stem grows through the water, which represents life. Then the flower blooms on top to symbolize enlightenment.

Many people believe that meditation is a Buddhist practice. However, it is a yogic practice that was adopted by Buddhism. Buddha himself used meditation as a main focal point of his life. There are different ways to practice meditation, but they are essentially all the same. The end goal is to sit in the Oneness of Being and bask in the loving awareness that is life. Getting it tattooed is a great reminder of this.

The Unalome is supposed to represent the path to enlightenment in this life. The beginning is rough and filled with twists and turns. Once enlightenment is achieved, the path seems a little straighter. Then, the dot at the end represents death or dissolving into the nothingness of the universe.

Building and maintaining a zen lifestyle is important for those that practice yoga. Essentially, a zen lifestyle is one that lives consciously and does things fully. Not only this, but they usually live simply as healthy. This leads to a deep feeling of gratitude in those that strive to live a zen lifestyle. Many people get it tattooed as a way of solidifying their efforts.

Mandalas have been used for centuries as meditative tools to calm the mind and allow for wisdom to enter and multiply within the spirit. A mandala is a flower-esque shape that repeats and mirrors outwardly and symmetrically. This consecutive motion relaxes the brain to allow for even flow of consciousness. As a tattoo, it serves as a tremendous visual tool.

Sacred geometry is nature’s perfection art form. The Fibonacci Sequence is an example of sacred geometry. The Metatron’s Cube (left) and Flower of Life (right) are great examples as well. These sacred symbols are a great way to adorn your body in high vibrational energy.

Unlike the mandala, which is one that generates peace and wisdom of inner knowing, the Hamsa is a symbol of abundance and positivity. When tattooed onto the skin, the yogi can easily access this abundance whenever they want.

The ‘OM’ symbol is technically a Sanskrit symbol, but it is so popular it had to get its own spot on the list. It represents everything that is. It is the consciousness and frequency of the entire universe. When it is tattooed on the body, it serves as a great reminder of how big the universe really is. Many people also find it brings them great peace to look at the symbol. When spoken, the humming sound vibrates at a frequency so soothing it can put a crying baby to sleep.

The word “namaste” is also a very popular tattoo among the yoga community. It is a peaceful Sanskrit greeting that literally translates to “I bow to you.” when spoken, it shows your respect for the person and honoring their space and divinity while expressing a feeling of love for the person. When spoken, the person places her palms together at her chest and bows.

As a tattoo, it can express this energy to anyone that reads it.

Yet another Sanskrit symbol that is popular enough to get its own slot is the symbol for the word ‘breathe.’ In fact, it closely resembles the ‘OM’ symbol in the middle. As a visual, it serves to relax the mind and encourage deep breathing for a fresh wave of thinking. Many of those that struggle with anxiety find solace in this symbol.

Multiple Symbols in One

Sometimes, it is too hard to decide on just one yoga tattoo. For the indecisive, there is also the option to just combine your favorite symbols into one tattoo. As a result, the tattoo will be a little larger. It will be more monumental, but also will hold a little more meaning because it is something you put together on your own.

Ganesha is one of the most powerful symbols of supreme consciousness in Hinduism. Many who practice the religion or simply practice yoga will get this tattoo because it symbolizes such wisdom. When meditating on Ganesha, it can help activate your third eye and quiet the stream of consciousness thinking.

Spirit guides are an age-old reason for getting a tattoo. It is because of yoga’s close ties with eastern traditions that spirit guides are present in yoga as well. Spirit guides can be animals, numbers, trees, or anything else with the ever-present life force that is capable of communicating messages.

The thing about spirit guides is that they can change all the time. That said, sometimes, there is one specific guide or totem that has been with you your entire life. Typically, this is the guide that people get tattooed on them.

The Tree of Life

Just like most of the other tattoos on this list, the tree of life is a powerful symbol of spirituality. It appears in many mythologies around the world and represents the mind and body in relation to wisdom and beliefs. It’s a great reminder of the inner-connectedness of all things.

Everyone knows about the four traditional elements: air, water, fire, and earth. However, in the yoga tradition, there is a fifth element that is just as important to represent here. The fifth element is the spirit element. The spirit is just as much a part of everything as the earth and the wind.

The Sun and Moon

Just like the moon phases tattoo, the sun and moon combo tattoo is popular in the yoga community. Many yogis are closely tied to the energy of the sun and moon. Not only that, but a crescent moon fits perfectly snug around the outside edge of the sun to create an aesthetically pleasing tattoo.

The things you choose to get tattooed on you in this life can be used as energetic symbols on your path of spiritual discovery. Yoga tattoos are extremely spiritually oriented, which makes them that much more potent. Whether you use your tattoos as spiritual reminders or ways to decorate your body, there is a yoga tattoo out there that is perfect for you!