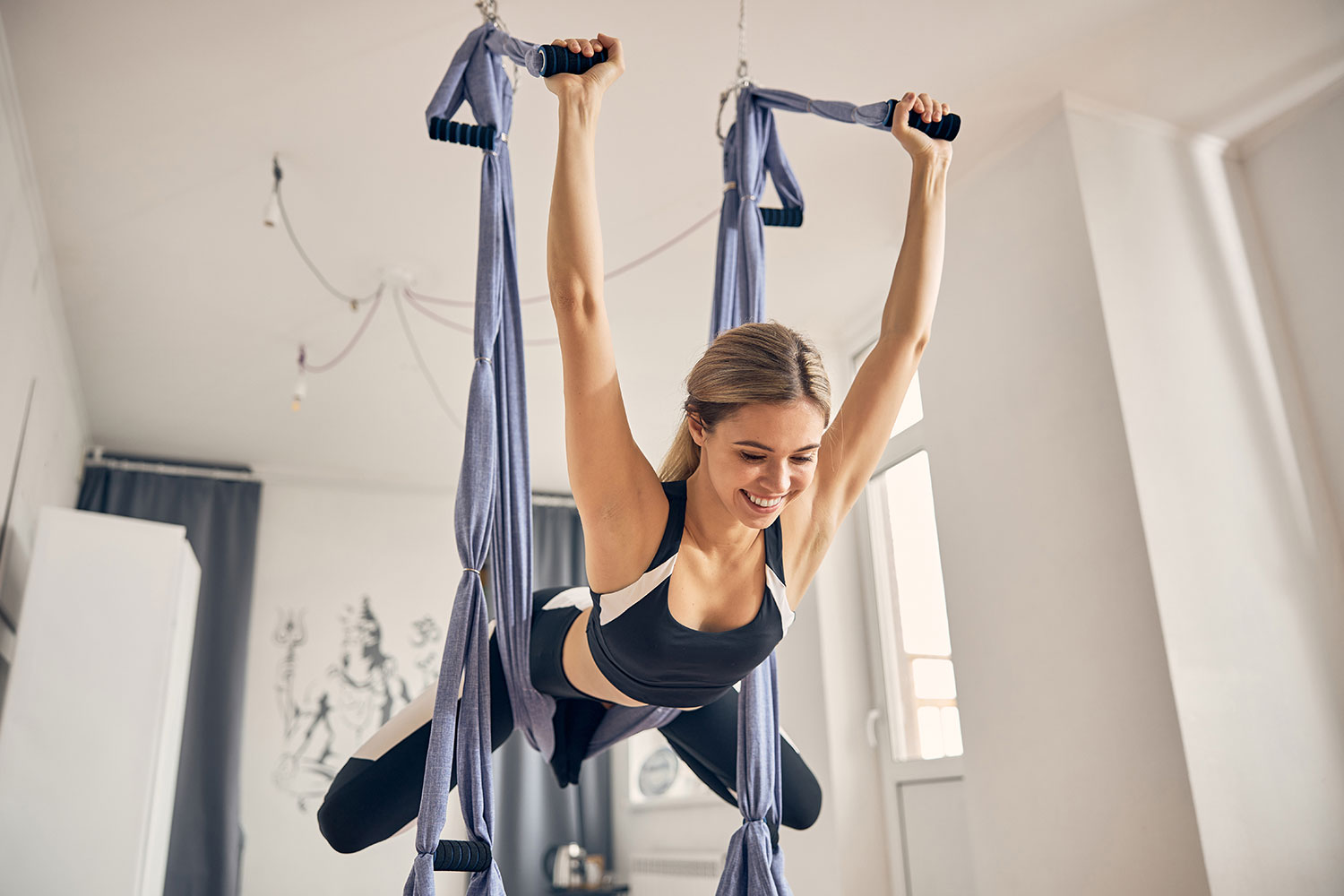 Yoga Blankets: Your Guide to Use and Choose the Best One for...

The Yoga Swing is a fun way to practice asana while suspended in the air. It is a combination of yoga and trapeze acrobatics that makes you feel like you’re flying gracefully.

It allows you to practice various asanas with the support of a strong fabric hammock. And it’s quite useful for staying in inversions to decompress your spine and doing other aerial yoga tricks.

It was developed in the early 2000’s and today there are many variations of it on the market. Although it is a relatively new trend in modern postural yoga, the idea behind it is based in history.

This guide will tell you all you need to know about how the yoga swing and aerial yoga came to be. If you have your own yoga swing or hammock, you can also practice some simple, beginner-friendly yoga swing poses.

Photos dating back to 3000 B.C.E show how devices made of rope were used to help yoga practitioners into inverted yoga poses. This was used as a tool for support for certain asana rather than a whole yoga practice in a swing.

B.K.S. Iyengar, who became known for developing a style of modern yoga that uses props, also used ropes and harnesses as tools to assist and go deeper into various levels of asanas.

Iyengar did not have sophisticated yoga swings yet so these slings were made of improvised ropes, yoga straps, blankets, and other materials.

The first modern yoga swing may be traced back to the United States. Antonio ‘Tone’ Cardenas was a physical therapist for 20 years who developed his vision for a yoga swing in 2001 to help himself heal his own back injuries.

Cardenas has said that he did not invent the yoga swing himself, but he saw inversion therapy as a valuable way to decompress the spine.

Around the same time period, in 2003, the “Gravotonics Yoga Swing & Exercise System” was developed in Bali, Indonesia. The trend began to pick up and in 2004, Lucas Rockwood discovered the yoga swing in Thailand and went on to design his own version called the Yoga Trapeze.

How to Practice Yoga in a Swing

Yoga swings can be used for Aerial Yoga. There are many styles that fall under this umbrella term. Some may even use a specific brand of yoga swing, hammock, or trapeze.

Aerial yoga is a practice that combines yoga asanas, gymnastics, pilates, and circus acrobatics. It can be a dynamic, full-body and mind workout or a restorative practice. The yoga swing can be used as a tool to support a pose, or the whole practice can be done while hanging in the swing.

One of the most popular styles of Aerial Yoga is AntiGravity Yoga which was created by Christopher Harrison. He first created AntiGravity Fitness in 1991. A few years later, he traveled to India and added hatha yoga asanas to his classes.

Some of the yoga asanas that can be practiced in a yoga swing look familiar. They may even share the same Sanskrit names as traditional yoga poses. But the practice is very different from yoga practiced on a mat. And the benefits of the practice on your spine is mainly what brings people back to it.

Where to Find Yoga Swings

There are many yoga swing brands to choose from. Some have handles that are used to support certain poses differently. Others have multiple layers of fabric to hold up different areas of your body.

These are some of the most popular yoga swing brands available today:

This yoga swing claims to be one of the originals in Aerial yoga. The company has been around since 2003. Each swing is handmade in Bali and has a 440 lbs. load capacity.

This yoga swing is made of parachute fabric and has three padded handles on each side.

In addition to emphasizing safety in construction, the company also gives back 5% of their profits to local community groups in Bali that are dedicated to cleaning up the environment.

The Omni Yoga Swing comes in various price points. You can get the basic yoga swing all the way up to the swing with all the bells and whistles, including a freestanding frame.

The company makes all their yoga swings in Chico, California, USA. They offer customizations to your yoga swing such as extra padding for your seat, a portable stand, extra chains, and others.

They also offer assistance to get your yoga swing purchase funded by your health insurance provider.

This swing is used in YOGABODY franchise yoga studios around the world. It consistently comes up as one of the best yoga swings on the internet.

They are so confident in the quality of their yoga swings that they offer a 10-year warranty on parts or the whole swing.

No matter which yoga swing you purchase, there are some general safety tips you can follow.

Whether you’ve purchased a new yoga swing or signed up for aerial yoga classes, have fun with your new yoga prop. Be mindful in your new practice by finding that perfect balance between pushing your limits but also respecting your boundaries.

Here are 12 basic yoga swing poses you can try while you get the hang of it.

A yoga swing can take a lot of the fear out of practicing inversions in yoga. The feeling of being off the ground can make you feel like you’re flying.