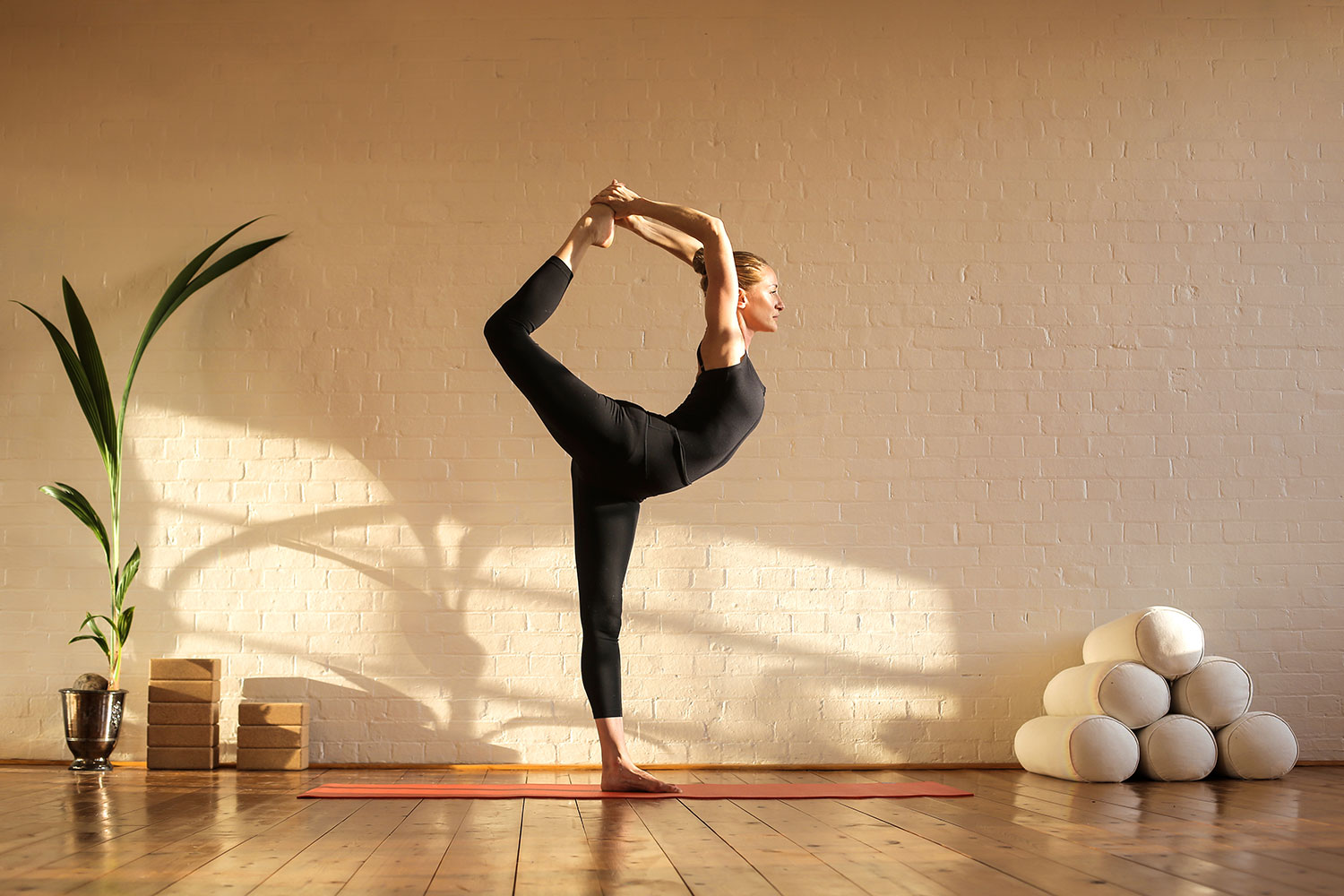 Cork Yoga Mat: Is This Eco-Friendly Option Worth It?

Yoga has always been a part of Eastern culture. It was introduced to the West in the late 1800s, but it seems to have exploded in popularity in America over the last ten years or so.

Nowadays, it’s harder to find someone that isn’t familiar with yoga than someone that is. Whether you are walking downtown and see a few yoga studios or you follow an Instagram influencer yogi, chances are you are familiar. The question is, though, how familiar?

There is a lot of misinformation and information that is simply left out of mainstream culture. There are historical facts about yoga that most people aren’t aware of. Not to mention all the fun facts that have surfaced, including world record holders!

Below are the top 35 most interesting facts about yoga you may not know:

1. Do People Ever Get Hurt During Yoga?

The United States Product Safety Commission listed 4,450 reported yoga injuries in 2006. This number was up from 3,760 in 2004. However, the number of people practicing yoga went up as well.

And those are only the injuries

2. Yoga Is Known as One of the Most Successful Examples of Globalization in the Modern Age

It is in the top five for fastest growing industries in the US. Money that is spent on yoga throughout American rose 87% in the last five years, with no signs of stopping.

3. Yoga Was First Introduced to the Western World in 1893

Hindu leader Swami Vivekananda is known for being a key force in introducing yoga to the Western world. He gave an address to the Parliament of Religions in Chicago in 1893. This address is said to have catapulted yoga’s presence in America.

George Harrison, of The Beatles, also helped with the introduction in the West. As a band, The Beatles were pioneers for bringing the sitar into rock music. They were also the first to introduce Hindu melodies into modern Western music.

4. The “Take Back Yoga” Campaign

In late 2010, the Hindu American Foundation launched its “Take Back Yoga” campaign. The goal was to spread awareness of yoga’s Hindu roots.

However, some scholars argued about the legitimacy of the campaign. They stated that yoga actually began in the Vedic culture in India. The Indo-Europeans settled there around the third millennium B.C., which was long before Hinduism began.

“Doga” is a type of yoga for pets. In this type of yoga, people actively try to achieve and maintain harmony with their pets. A lot of the time, the dogs are used as props to aid in yoga poses. Sometimes, though, the dogs do some stretches themselves.

You might not be surprised to hear that it was first reported in New York in 2002 when Suzi Teitelman started “Yoga for Dogs.”

It is derived from the Sanskrit roots, which is why Sanskrit tattoos have also become more popular in recent years.

The Sanskrit root yuj, meaning to yoke or join together, is what the word “yoga” is derived from. The yoking refers to the yoking of a conscious subject or jiva-atman with a Supreme Spirit or parama ta man. This occurs to reach a state of consciousness of ultimate bliss, which is also called Samadhi, or a “placing or putting together.”

7. Wait, How Many Americans Are Doing Yoga?

A recent study in Yoga Journal reports that some 20 million Americans practice yoga. This means that nearly nine percent of all Americans are practicing yoga. Not only that, but they are spending around $5.7 billion a year on gear.

8. The True Origins of the Swastika

The swastika is actually a yoga symbol. The symbol comes from the Sanskrit term Svastik, which means “that which is associated with well-being.”

When said out loud, almost like a soft humming, “Om” is said to be the primordial sound of the universe. It is connected to the Third-eye (Ajna) Chakra, otherwise known as “the conscience.”

10. Yoga Can Even Improve Sex

The word “Hatha” derives from Ha meaning “sun” and –tha meaning “moon.” It ties closely with yoga’s attempt at acknowledging the dual forces throughout nature and the universe, the dark, and light in everything. That is also why the yin yang symbol is so prominent in yoga.

One of the first American yogis was Pierre Bernard. He is also known as the “Omnipotent Oom.” He’s known for founding the Tantrik Order as well. The Tantrik Order was a secret society that taught its members Hatha yoga, philosophy, and Sanskrit. The society also approved sacramental sex.

13. The Oldest Text in the World Speaks of Elements of Yoga

The Rig-Veda, otherwise known as “praise of knowledge,” is one of the oldest known texts in the world. Scholars believed it contained elements of yoga. It’s believed to be more than 4,000 years old, dating back to 1500 B.C. or earlier.

14. It Can Even Help Prevent Premature Ejaculation (PE), According to an Indian Study

Through the help of various techniques, yoga helps to reduce performance anxiety while keeping the mind in the moment.

15. The Founder of Buddhism Is Typically Shown in the Lotus Pose

The lotus pose is a seated pose in yoga. It is meant to portray the perfect symmetry and poise of a lotus flower. The founder of Buddhism was Siddhartha Gautama, and he was typically shown in the lotus pose. Shiva, a Hindu god, was also in this pose.

16. There Are Eight Branches of Yoga

There are eight branches or limbs in yoga. Each branch is known as:

When most people hear the word “yoga,” they think of all the different poses and postures. These postures are also referred to as the Asana branch.

That said, yogini is also used in schools of Tantra to describe a female partner. Not only that, but the 64 female deities responsible for manifesting universal creative energy are also referred to as yoginis.

18. There May Be Certain Poses You Should Avoid During Your Menstrual Cycle

This is a topic that is highly debated across the yoga community, especially yoga teachers. Some believe women should try to avoid inverted poses while on their period. These same teachers believe the inversion disturbs the energetic flow within the body. This disturbance can lead to vascular congestion or endometriosis. On the other hand, other teachers say it alleviates menstrual cramps. At the end of the day, it is most important to do what feels right for your body.

Carl Jung was a Swiss psychiatrist. He was also one of the first Westerners to study yoga in depth. He made comments on developing higher consciousness in the East, which helped introduce the West to yoga practices and ideals.

He liked to practice kundalini yoga.

20. Yoga Has Elements of Shamanism

Stone Age shamanism dates all the way back to 25,000 B.C. Scholars believe that yoga incorporated many of its elements. Yoga absorbed techniques like shamanic poses, transcendence, illumination, and asceticism.

21. American Yoga Has Been Around Longer Than You Probably Think

Henry David Thoreau visited Ralph Waldo Emerson in his library. It was there that he caught a glimpse of Manusmriti, which is the book of Hindu law. After that day, Thoreau tried to live his daily life in solitude and a meditative state in general.

23. There Are Over 100 Different Schools of Yoga

Some of the different schools include:

There might be 100 different schools, and they might have relatively unique practices. However, they all still maintain the same goal. All yoga practitioners’ and teachers’ goal is to achieve a state of pure bliss and oneness with the universe.

There’s a council of muftis in Malaysia. A mufti is an Islamic jurist capable of issuing rulings on religious matters. In 2008, the council banned yoga for Muslims. They stated that the Hindu elements in a typical yoga class could potentially “destroy the faith of Muslims.”

25. In Ancient Yoga, It’s Believed That Humans Only Have a Selected Number of Breaths

This could be why there is so much focus revolved around breathwork and controlling your breath in yoga. — it was essentially thought that slowing your inhales and exhales down would lengthen your life!

It is currently listed in The Guinness World Records that 85-year-old Bette Calman from Australia as the world’s oldest yoga teacher.

However, there’s a 90-year-old yoga teacher from Royton, Oldham named Gladys Morris. She is petitioning the Guinness World Records, so she will then be recognized as the oldest.

It was in 2015 in late June that International Yoga Day was established. In celebration and honor of the day, the Indian Postal Service released its first yoga stamp. The stamp featured the outline of a yogi in the seated position with Anjali Mudra just overhead.

28. Yoga Is Now an Olympic Sport

In India, yoga isn’t used as a competitive sport. However, in the 2016 summer Olympics, it became an official sport. Each participant performed five mandatory poses, then two others of their choosing. They were then judged on flexibility, strength, timing, and breathing. In the 2016 Summer Olympics, the winner was yogini Briana Bernal.

29. It Can Postpone the Onset of Alzheimer’s Disease

The Alzheimer’s Research and Prevention Foundation funded research that discovered that regular practice of yoga and meditation could tremendously slow down cognitive impairment.

Bangor University discovered that regular yoga sessions could reduce back pain issues, as well as absences from sick days.

A recently published study states that yoga seemed to provide relief for those suffering from Obsessive-Compulsive Disorder. It was also discovered to aid in depression and anxiety patients as well, as an add-on therapy.

Depending on what type of yoga you do, some help with sleep, while others can serve as a workout! Practicing slow-moving flow with controlled and deep breathing can help slow down thought processes and aid in longer, deeper sleep at night.

33. The Lotus Pose is the Most Popular Pose

Below are the top 10 most popular yoga poses:

Power Poses are known to help improve self-esteem. Any pose that is expansive and open is considered a Power Pose. They also help to boost energy levels.

35. The Headstand Is Reported As the Most Dangerous Yoga Pose

Below are the top five most dangerous yoga poses:

Whether you are a seasoned yogi or yogini, or a beginner, hopefully, you learned a little more about yoga than you knew before reading! When used properly and consistently, yoga can provide endless benefits for your life. Not to mention, possibly sending you to the Olympics!

Yoga Blankets: Your Guide to...