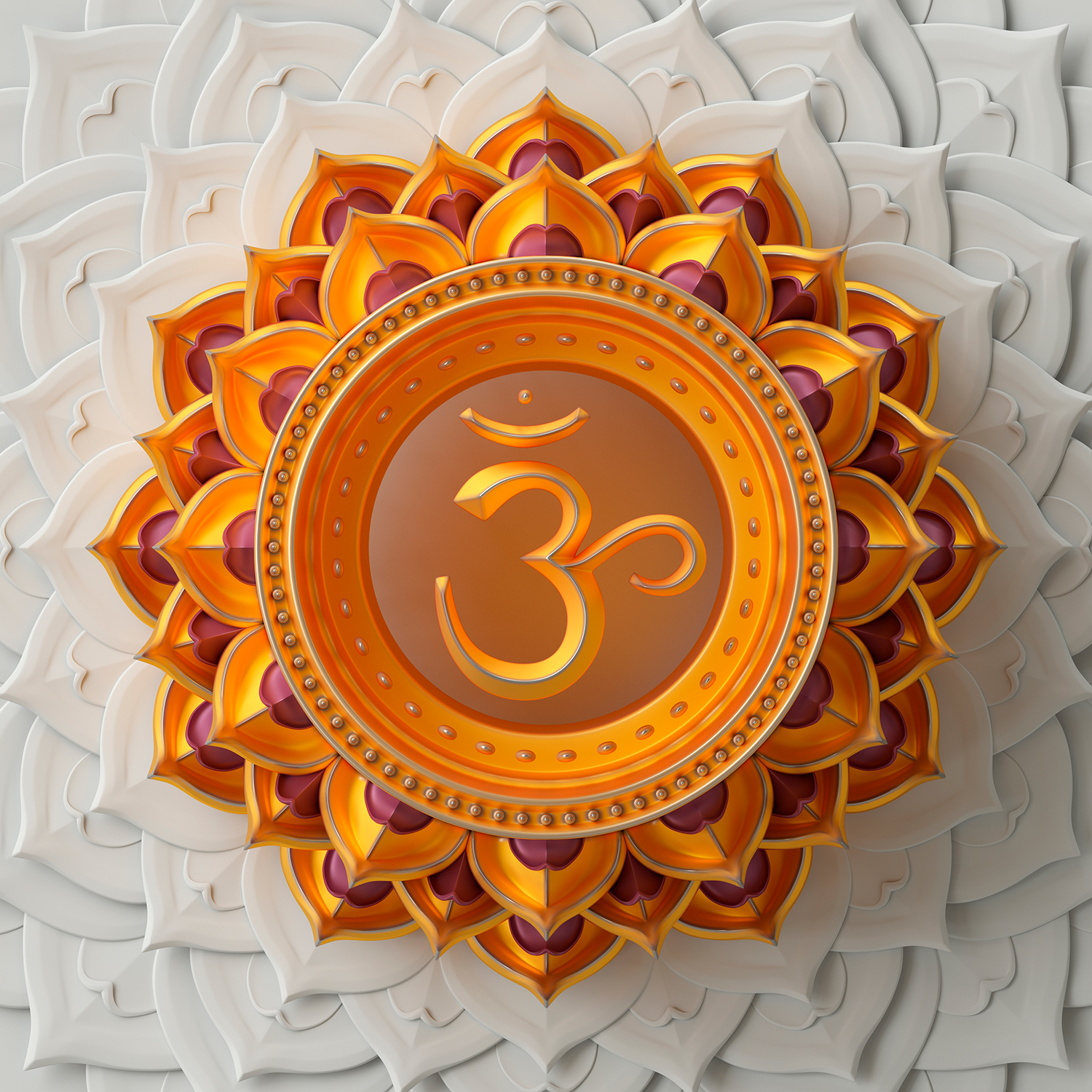 Many are familiar with the “Om” chanted at the end of a yoga class. But what is Om, what does it mean, and why is it so important in yoga? Om is described as a mystical chant, vibration, syllable, and mantra. Many believe chanting the syllable “Om” has great spiritual and emotional effects. It is called the “sound of the universe”. Om is even said to be a symbol of the Divine and ground the chanter into a cosmic energy.

Beyond this mystical side, however, Om is also important because it is a universal invocation that anyone can use, at any time. After all, chanting the syllable “Om” can seem much more accessible than practicing often complicated asanas (yoga poses). This universality makes Om a method of connection. When chanted in a group at the beginning or end of a yoga class, Om connects the students and teachers, not just to each other but also to the universe around them and the sacred history of the yoga tradition.

Om is an ancient concept that is also referred to by some as pranava, or cosmic sound. Om is integral to yoga, and originated in the Sanskrit language as part of the Upanishads. Om is considered a sacred sound, and scholars even see nods to Om in other religions such as Islam, Christianity, and Judaism. There are multiple historical texts which explain the importance of Om. One of these is the Mandukya Upanishad, a sacred Hindu text dating back thousands of years.

Here, Om is illustrated as at once superseding time, and encompassing all time. Another sacred Hindu text that is central to yoga is the Bhagavad Gita. In this text, Lord Krishna (a symbol for the Divine) describes the chanting of Om as,

Uttering Om, the single-syllabled Brahman, meditating on me, departing thus from his body, he attains the Goal Supreme. Bhagavad Gita, 8(13)

So not only does Om connect all time, but it also connects the chanter with the Divine. It is said that Om is the original sound of the universe, a primordial sound that brings the chanter back in tune with the Divine.
In modern times, Om is popularly chanted in unison at the beginning and end of yoga classes. This is a long-standing tradition and to many yogis it is an important nod to the sacred history of the yoga practice. However, for others Om has become a trendy symbol, with its written form commonly used in jewelry and on clothing. Because Om carries such a heavy spiritual history, it should only be worn or chanted in utmost respect. Furthermore, when traveling to India the Om symbol should only be worn thoughtfully, and with acknowledgement of its sacred symbolism. The modern popularization of the Om symbol has been described as equivalent to wearing the Christian cross without knowing or respecting what it means. When the true history and meaning of Om is understood, it can be a powerful practice.

At this point, it is important to mention to phonetics and spelling of Om. Because Om was originally a Hindu concept and written in the Sanskrit alphabet, the spelling “Om” is a Westernized modernization. Many people argue that Om should be spelled “Aum” because, when chanted, there are actually three separate sounds: A, U, M. In Sanskrit, the “O” is actually pronounced as a dipthong, or a sound composed of two vowels, in this case “AU.” Each sound represents a distinct state, discussed below.

It is said that Om consists of every part of speech for all languages. In every language, regardless of alphabet or pronunciation, there are the “A,” “U,” and “M” sounds. A represents the throat sounds, U is the rolling sound, and M is the closed-lip sound. Each of these three sound types are used in every human language. It is not surprising, then, that Om is an appropriate sound to represent the original sound of the universe.

The second state (U) is the dream state, pronounced as “Oooo.” The dream state is a balance between inward and outward focus, just as it is the connection between the waking state and deep sleep state. When chanting “Oooo,” attention is drawn inward, yet it is still affected by the external world and the sensations of the “Ahhh,” or waking state. The dream state is a relinquishing to the universe and the Divine, as the chanter begins to draw away from external creations, the self, and the senses. Similarly to the waking state, the length, clarity, and quality of the “Oooo” syllable will give insight to a person’s dream state, wisdom, sense of clarity, and connection with the wider universe.

The final audible syllable is the M (pronounced “Mmm”). This is known as the deep sleep state. This final audible syllable is recognized as the transformative sound of the universe. The deep sleep state is the state of the void, or in other words it is the state where all the senses and desires of the waking state, and even the wisdom and reflection of the dream state, and released. In the deep sleep state, the person will find peace, bliss, and replenishment through connecting with a universal consciousness. The quality and length of the “Mmm” sound in Om will offer insight to a person’s deep sleep state: Whether they are at peace, non-grasping, blissful, and more.

There is a final state of AUM that is not as well known. This finale state is called Turiya, and it is the silence following the final syllable. In this silence, the audible vibrations of AUM have ended, yet they are still felt in the throat, the mind, and the room.

[Om] is an eternal song of the Divine. It is continuously resounding in silence on the background of everything that exists. Amit Ray

Many people overlook the existence of Turiya as a state, yet it is the most enlightened and pure of all the states. After all, without silence there can be no sound. Each state exists in contrast to the others. Unlike the other states, in Turiya there is no duality of sleep or wakefulness; Instead, there is just experience of pure consciousness. This fourth state is elusive, yet always there following every AUM. The challenge lies in truly feeling it and letting go all external artifice.

The gentle vibrations bring a blissful feeling.
Anxiety and depression are reduced.
Chanting strengthens the voice and the throat chakra.
Regular chanting brings a sense of wellbeing and balance.
The U (dream state) vibrations benefit the thyroid in throat.
The vibrations clear your sinus.
Endorphins are released and hormones are balanced.
Your concentration and ability to focus longer will improve.

These benefits span the physical, emotional, and spiritual planes. They can be even further amplified by chanting Om within a group.

All that is the past, the present and the future, all this is only the syllable Om. Mandukya Upanishad, 1

Many scientists rely on the theory that the power of Om lies in its vibrations. In Quantum Physics, the study of the smallest particles of the universe, there is String Theory which proposes that matter is composed of miniscule string-like particles vibrating at different frequencies. It is these vibrations that hold together all matter, and therefore the universe. Chanting Om creates a vibration in the body and the surrounding environment, which when chanted repetitively can unite all surrounded matter in the same frequency of vibration. With this vibration, the chanter is literally united with the universe through Om.

Furthermore, these vibrations can awaken and energize areas of the body such as the pineal gland (known as the third eye), pituitary gland, and sinuses. This, in turn, can regulate hormones, enhance mood and sleep, and more.

How to chant Om

Om can be chanted individually or in a group. When chanted in a group, the vibrations are felt and sent manifold, and will create an even more profound sense of wellbeing.

Most people chant Om from a cross legged seated position, or lotus pose. Any mudra (hand position) can be used, but a common one is to connect index finger and thumb and extend other fingers, with arms extended and palms facing upward on the knees. This is known as Gyana Mudra.

Gaze should be cast downward, with the eyes closed. Take a deep breath in, expanding the diapgragm and filling the lungs, before chanting Om (or AUM) on the exhale. Do not overthink the pitch or tone of your Om. Instead, choose the most natural pitch for you. This may change with each Om and may alter as you adjust to the other people in the room.

Once you are comfortable chanting Om, a good exercise is to occasionally asses how your chant. To do this, you need to have knowledge of the three states of AUM (waking state, dreaming state, and deep sleep state), which are discussed previously. As you chant, either on your own or within a group, bring awareness to each syllable you pronounce. Some questions to ask are:

Thinking of these questions, and just generally being conscious of how you chant AUM will bring clarity to your own state of being. Deficiencies in one state will bring insight to other areas of your life. For example, do you skip over the U syllable, or dream state? You may not be taking enough time to reflect on life, or you may be experiencing a mental block. Do you spend the most time on the A syllable, or waking state? You may be overly tied to material possessions, or stressors in your daily life. Asking questions and considering each syllable in relation to your life will grant you insight to yourself. Furthermore, by consciously prolonging certain syllables, or balancing each syllable, you can bring much-needed balance to your life.

The audible sound, the vibrations, and the act of chanting are all integral to the power of Om. However, Om is also a written Sanskrit symbol. This symbol is sacred, and as discussed previously, should only be worn by a person who understands the history and power behind it. The Om written symbol reflects the qualities of Om, including the three audible states, and the silent state.

The symbol of Om is more than just a written character. It is the diagram to enlightenment. The three states of waking, dreaming, and deep sleep are connected, with deep sleep rising above. It is the ignorance and illusion of Maya that stands in the way of pure enlightenment, or Turiya. Only once illusion is surpassed enlightenment be reached.

Just as with all aspects of yoga, the meaning of Om is complex, historical, sacred, profound, and scientific. Similarly, its true benefits and meaning can only be understood if it is practiced regularly and with great respect.

How Often Should You Do Yoga...

Balancing 7 Chakras: What Yo...