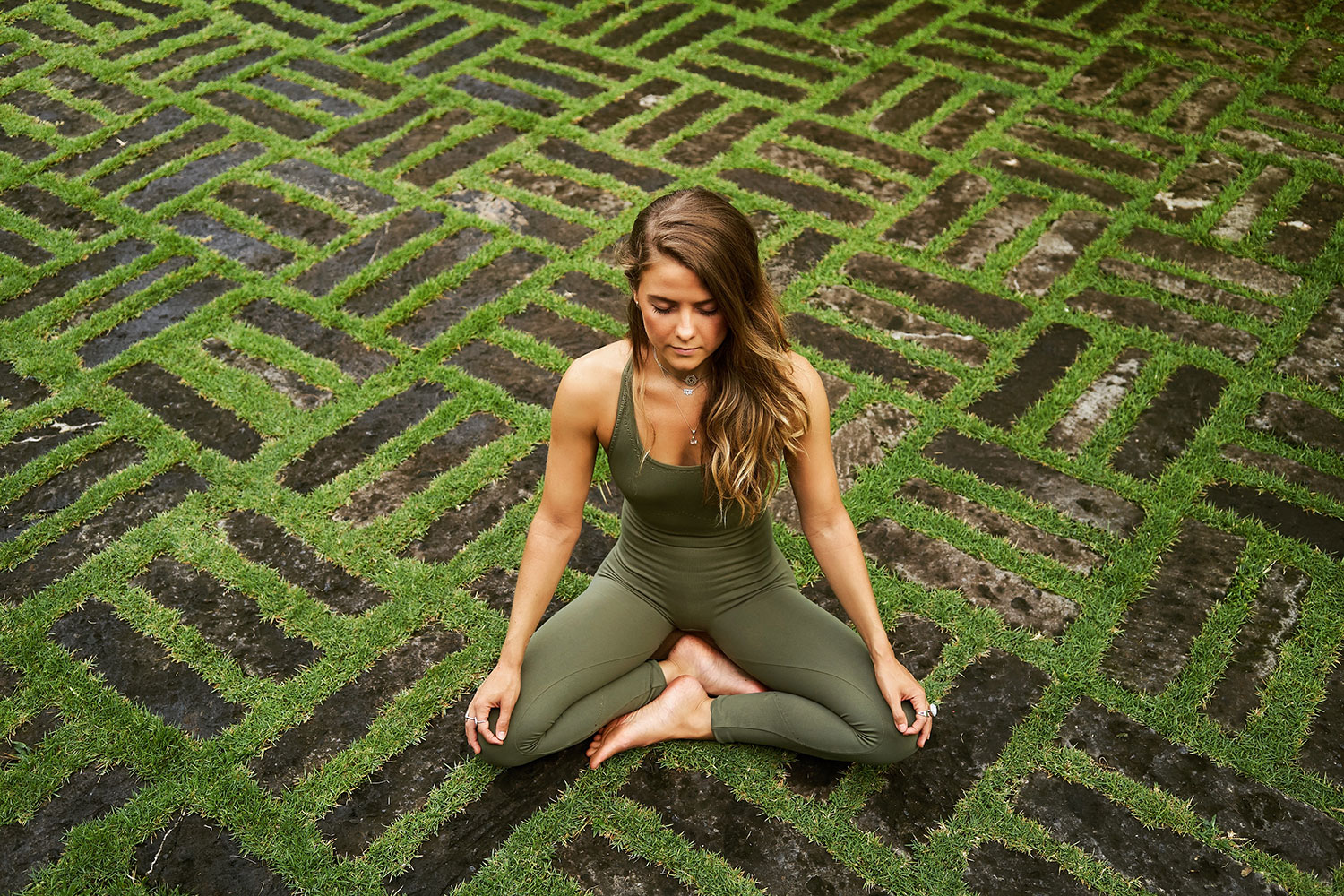 10 Standing Poses You Should Do Everyday

You may have been invited to chant the sound OM at the start or end of a yoga class. This is one of the most recognized mantras. It is a sacred sound which is said to be the cosmic seed sound – the vibration of the whole universe.

Mantras are often recited during meditation to help focus and quiet the mind from distractions.

But mantra is more than reciting words. Ancient vedic and yogic philosophy teaches that mantra is the audible manifestation of energy which connects everything in the seen and unseen universe. So repeating a mantra will allow you to resonate completely with that particular energy.

The History of Mantra

Mantras are part of Vedic, Hindu, Buddhist, and Jain tradition and sacred practice. They may be repeated verbally, mentally, or even drawn or carved onto various surfaces.

Even scholars debate on the origin and meaning of mantra. Some say that they are carefully constructed sounds based on precise mathematical formulas, while others say that they are just gibberish inventions which help to focus on meditation, prayer, and ritual actions.

Fritz Staal, author of “Rituals and Mantras, Rules without meaning,” described mantra as both – he said that many mantras have literal meanings that are of sacred and religious significance, especially in Hinduism, but many mantras also do not carry any literal translation.

In an article Staal published in the Journal of the American Oriental Society in 1985, he compared mantra to bird songs. He hypothesized that mantras are older than language, even Sanskrit, and just like the sounds birds make, mantras have the power to communicate beyond language, though they have no literal meaning.

Sadhguru (Jaggi Vasudev) also teaches that mantras are significant because of their sound and not for their meaning. He explained at talk in MIT in 2017 that meaning is an invention of the mind – it only exists psychologically and socially. But sound is reality. In fact, even matter is made up of sound.

So mantras are sounds which are keys to open up new pathways in this world which is made up of a complex amalgamation of sounds. According to Sadhguru, we must learn which key (mantra) goes in which hole and which particular way to turn it, in order to open up the doorway.

Many mantras chanted at Hindu, Buddhist, and Jain temples are the same mantras that were recorded in the Vedas thousands of years ago. But they were passed down verbally for many generations even before they were ever written down.

What Science Says about Mantra

Modern researchers are supporting the historical claims that mantras are beneficial to quality of life, not of for those who have a regular meditation and yoga practice, but for anyone who recites mantra.

In the book, “The 7 Secrets of Sound Healing,” author Jonathan Goldman said that repeated chanting of mantras allow the left and right hemispheres to synchronize. The benefits of this allows the brain to communicate more effectively and even create new neural pathways for whole brain functioning.

The benefits of mantra meditation can even be achieved by those who do not have a spiritual background or do not know the meaning behind the mantras they are chanting or meditating with.

As published in the Annual Review of Nursing Research in 2014, mantra repetition was recommended as a simple, portable, and private complementary practice to be used alongside other therapies for those with PTSD.

A mantra may be a traditional Sanskrit once from the vedas or transmitted by a guru or teacher, or it may even be a word or phrase from the language you speak. In the 1970s, a researcher named Herbert Benson found that whether his subjects recited a mantra like OM, or the English word “one,” the results were the same: “relaxation and the ability to better cope with life’s unexpected stressors.”

10 Well-Known Mantras and What they Mean

The mantra is actually made up of three sounds. The first sound “A” is said to invoke Brahma, the creator; “U” calls upon Vishnu, the preserver; and “M” is a sound which seals the mantra and represents Shiva who is the destroyer aspect of god and also Pure Consciousness.

OM, the Jewel of the Lotus.

This mantra is often repeated by Tibetan Buddhists because they believe that it will help them attain Buddhahood. In Tibet regions of the world where Tibetan refugees have settled, this mantra is written everywhere and recited by nearly all Tibetans.

Shiva is Pure Consciousness. He is our inner self – our true reality. The nature of this mantra is to call upon your higher self, Shiva.

This is one of the most important mantras in Shaivism and it reminds those who meditate with this mantra that not only are you Lord Shiva, but Lord Shiva is made up of all the elements:

This mantra is often chanted in Kundalini Yoga. In the Sikh language, Sat means “truth” and Nam means “name.” So the mantra translates into “I am Truth.”

The mantra is usually recited at the end of a Kundalini yoga class in a very precise way. The sound of “SAT” is extended at least eight times as long as it takes to say “NAM.” Sometimes, the “SAT” can be extended 35 times as long as “NAM.”

According to Yogi Bhajan, creator of Kundalinit Yoga, SAT NAM is created out of five sounds which represent five cosmic bodies:

When you say SAT NAM to yourself or others, you accept your identity as true and you accept the identity of others as truth as well.

The Gayatri Mantra is dedicated to the vedic sun-deity, Savir. It is recited to honour the sun and ask it to enlighten our minds and understandings. It is believed that repeating this mantra in daily practice will bring happiness.

This “Maha Mantra” (great mantra) is often sung by devotees of the Hindu god Krishna, especially the Hare Krishna Movement which gained popularity in the US during the hippie era of the 1960s and 70s. Even George Harrison of the Beatles includes this mantra in his song, “My Sweet Lord.”

It is believed that when you chant this mantra, Lord Krishna, the creator will dance on your tongue and remove all illusions.

The Beatles popularized this mantra in their song “Across the Universe.” It was written to give thanks to the teacher of their teacher, Maharishi Mahesh Yogi. The mantra is meant to bring the mind into a higher consciousness.

Although this is not a traditional vedic mantra, it is a popular sloka (Sanskrit prayer) to invoke compassion and peace. It translates as, “May all beings be happy and free, and may the thoughts, words, and actions of my life contribute in some way to that happiness and to that freedom for all.”

This mantra is for Lord Ganesh, the elephant-head god. He is the remover of obstacles and this mantra is often repeated while on a long journey or when facing challenges.

Finally it is also believed that simply taking deep, long breaths is a mantra in itself. According to Devdutt Pattanaik, author of the book, “7 Secrets of the Goddess,” the greatest mantra to the Devi (mother goddess) is to be present and aware with your breath for a full day.

How to Use Mantras in Your Yoga and Meditation Practice

There are various ways to integrate mantra into your yoga or meditation practice. To begin, you may simply start and end your practice with a mantra to bring you into a centered state of mind.

To go deeper into mantra meditation, you may want to start with Japa beads. Japa are a string of 108 beads or seeds which are used to count how many times you’ve mentally or verbally recited a mantra. Japa are also called Mala, prayer beads, meditation beads, or rosaries.

You may also meditate with your mantra without beads. These are example of some methods of meditation which use mantras:

To get started on your own, you may simply sit comfortably in a quiet area and set an alarm to gently signal the end of your meditation. You can set this sound for three minutes, 20 minutes, or even an hour, depending on how long you would like to practice.

As you sit, you may close your eyes and say your mantra out loud, or silently in your head. Keep repeating the mantra until the alarm signals the end of your meditation time.

You may notice that at time your mind will wander off. This is normal when you are just starting a meditation practice. That’s why it’s easy to have a mantra to help you refocus and get back on track.

The longer you practice and the more regularly you set aside time to meditate each day, the less distractions your mind will have and the more you will be able to focus better on other tasks too.

Whether you say the mantra out loud, or repeat it silently, the sound, vibration, and frequency of the mantra will work through your system and let you receive the physical, mental, and spiritual gifts.

How to Find Your Personal Mantra

These days, mantras do not have to be in Sanskrit. You maybe more comfortable with a mantra created from a word or phrase in a language you understand.

Studies show that an inspirational quote, a prayer, or even a single word like, “Love” or “Peace” can have the same effects on the brain as an ancient vedic mantra or a Sanskrit mantra.

One technique to help you find your personal mantra is through journaling. Spend some time each morning writing in a journal and opening yourself up to whatever you are feeling at the present moment.

Perhaps a realization will pop up, maybe a direction, goal, or intention may arise. Allow yourself to reflect on whatever happens to rise up and note it in your journal. From this, you can find a theme to focus on and find your personal mantra based on your present life theme.

Mantras are powerful tools for meditation and yoga practitioners which predate written history. Modern science is only recently catching up to what ancient vedics and mantra meditators of various spiritual traditions already knew – Mantras give many benefits to those who recite and repeat them regularly.

From brain entrainment, better focus and attention span, healing from PTSD, anxiety, and other mental health issues, or just being able to deal with daily stress, mantras are a quick way to find peace, clarity, and a place to center in your mind when you practice yoga and meditation.