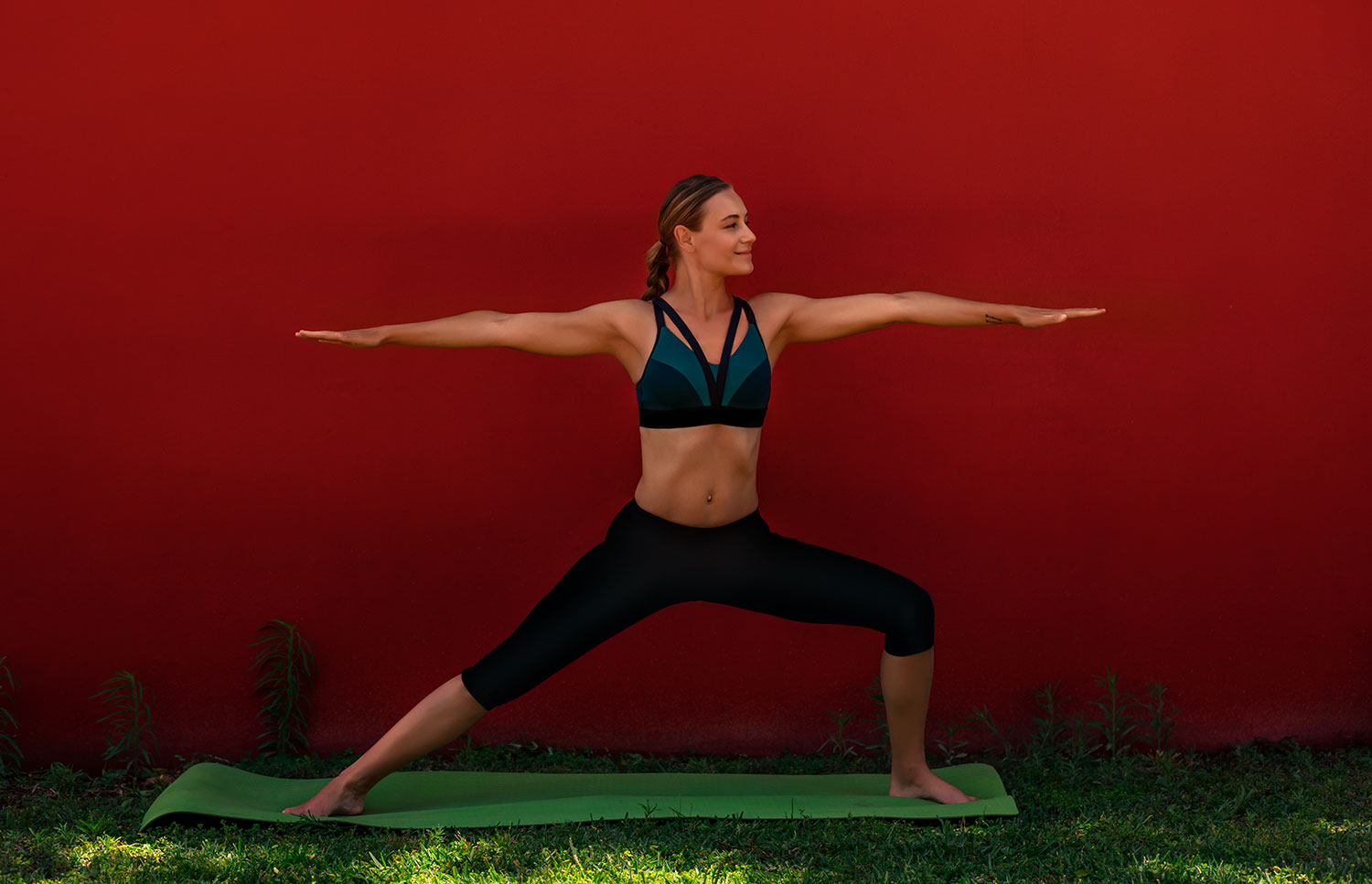 The three main yoga Warrior Poses are active and energizing. Each pose engages the entire body and gives you resistance training without the need for gym equipment or tools. Except for your yoga mat, but since these are standing postures, even that can be optional.

The three Warrior Poses yoga target and open different areas of your body. Warrior 1 is a heart-opening pose that expands your chest, Warrior 2 creates a deep hip opening for increased mobility, and Warrior 3 is an intermediate level yoga asana that develops overall body coordination and stability.

This guide will get into the history and intricacies of each yoga warrior pose in this guide and give you tips on how to incorporate these powerful poses into your practice.

The Story Behind the Asana

The warrior poses call for you to embody the energy of a fierce, powerful warrior with determination, strength, and discipline.

The Sanskrit name for these poses is Virabhadrasana. It is broken down into three parts. Vira means hero, Bhadra means friend, and asana means seat or pose. The hero referenced in this pose is an incarnation of the Lord Shiva.

Indian tales describe him as a tall, dark, and powerful figure who was unpredictable. His hair and eyes were made of fire. Some devotees of Shiva endearingly call this fierce warrior the True Avenger because of the story of how he avenged the death of Parvati, Shiva’s wife.

The story goes that Parvati’s father, the Lord of the Mountain, did not invite his daughter or her husband to his Daksha Yagna, where he was to give sacrifices as offerings to the gods.

Parvati went to the Yagna against the advice of her husband. There,she was so insulted at her father’s stubbornness and refusal to invite Shiva that she self-immolated in the sacrificial fire.

When Shiva was told of what happened, he flew into a rage. And Virabhadra was born from one of his dreadlocks. He instructed this warrior to avenge Parvati’s death, destroy Daksha’s army, and kill Daksha himself.

Virabhadra did so, and the sequence of the warrior poses tells that very story. The different arm positions in the three warrior poses represent the many arms of Virabhadra.

Warrior 1 is the part of the story when the hero rose from the ground from Shiva’s dreadlock, his arms, and gaze upwards.

From Tadasana, or Mountain Pose, step your right leg back around four feet (or a comfortable wide stance). Continue to face forward and turn your back toes out around 45 degrees.

Keep your chest wide and pelvis facing front like the headlight of a car. Bend your front knee, but don’t let it go past your front toes.

Inhale and raise your arms over your head. Exhale as you ease your whole body into the pose keeping your energy strong yet receptive.

You may keep your hands separate with your palms facing each other. Alternatively, you may also interlace your fingers except for your thumbs and index fingers—this forms Kali Mudra.

Kali was one of the forms of Shiva’s wife. Like Virabharda, Kali is a fearsome, terrifying warrior who emerged to defeat a powerful demon that none of the other gods could slay.

Warrior 2 represents the next part of the battle between Virabhadra and Daksha. The stance of this second warrior asana is like that of a fencer. And your outstretched arms represent the hero’s sword, ready to slice off Daksha’s head.

Start from Mountain pose and step your right leg back. Rotate your hips to face the long side of your mat. Rotate your back toes 45-degrees and keep both heels on the same line.

Stretch your arms horizontally towards the front and back of the room and look over your front fingertips.

Inhale to lengthen your spine and engage your core. Bend your front knee. Aim to have your thigh parallel to the ground so that your knee forms a 90-degree angle. More importantly, make sure your knee doesn’t go further than your front toes.

Engage your quads to strengthen your foundation and allow your hips to settle a little lower.

The third warrior pose is the culmination of the battle. Virabhadra picks up Daksha’s head and places it on a stake, symbolized by your arms pointing forward as you balance on one leg.

Like the previous two poses, begin by standing in Tadasana. Keep your spine long, core engaged, and lift your kneecaps so that your quads also remain engaged.

On an inhale, raise your arms over your head. Reach your fingers up to the sky to keep your hands activated.

As you exhale, hinge from your hips so that your torso is parallel to the floor. At the same time, balance on your right foot so that your left leg also lifts. Imagine a horizontal line running from the crown of your head to the heel of your left foot.

Your back foot may either be pointed or flexed. It’s more important to keep your pelvis level with both hips on the same line.

Look forward but be careful not to compress your cervical spine.

Release into Uttanasana or Standing Forward Fold, and then rise to return to Mountain Pose.

For all the Warrior poses, stay on one side for a few breaths, release and rest in Tadasana, then do the same on the opposite side.

In case you are curious, the story does not end with the beheading of Daksha. After seeing his foe slain, Shiva relented and decided to give him another chance. But he could not let his sin go unpunished.

So instead of returning his original head, Shiva gave Daksha a goat head.  This was to remind him how his failure to honour all the gods lead to the death of his favorite daughter.

When to Practice the Warrior Poses

Although the story of Shiva and Parvati is ancient, the Warrior poses themselves are not from a traceable ancient tradition.

It is widely believed that Virabhadrasana, as it is practiced in modern postural yoga classes these days, was first introduced by T. Krishnamacharya — the father of modern yoga. He taught it to his students in the 1920’3 and 30’s in India to develop their strength, balance, and coordination.

Two of Krishnamacharya’s students who have become famous in the western world are BKS Iyengar and Patabhi Jois, the founders of Iyengar Yoga and Ashtanga Yoga respectively.

Iyengar rated Warrior 1 as a 3 out of 60 difficulty level, and he emphasized lengthening and strengthening your legs in the pose rather than too much focus on keeping your hips square.

Benefits of the Warrior Poses

The three yoga warrior poses target your legs, glutes, hips, core muscles, chest, back, and arms. When practiced with proper alignment and muscle engagement, they are an all-around body workout that will help you develop focus, endurance, concentration, and power.

When you practice Virabhadrasana 1, 2, or 3, keep in mind how the sage Patanjali defined what an asana is in the Yoga Sutras:

Each Sanskrit word can have many nuanced meanings, but this verse may be generally translated as “a steady and comfortable seat.”

You should be able to feel comfortable and even joyful while practicing any asna. Whether the pose is a simple seat, an intermediate level inversion like Salamba Sarvangasana (Supported Shoulderstand), or any of the standing yoga warrior poses.

As you hold each pose, use the opportunity to apply strength and control where needed, and let go of unnecessary tensions or thoughts that arise. Each pose should be practiced to prepare both your body and mind for meditation.

Contraindications and Adjustments for the Warrior Poses

As with any physical practice, some poses should be avoided or practiced with caution if you have any new or pre-existing injuries or conditions.

If you have high blood pressure or any heart issues, it’s best to take it easy in these three poses. Pushing too hard may lead to over exertion and make your condition worse.

If you have any neck issues, keep your neck in a neutral position rather than turning it to a particular drishti, or focus point.

And if you have any issues with your shoulders, place them in any position that will best work for your body during your practice. There is no need to keep both arms perfectly horizontal in Warrior 2, for example. Instead, you can keep them parallel in front of you or slightly wider than parallel.

Sometimes it is challenging for beginner yoga practitioners to keep the back heel flat on the ground in Warrior 1 and 2. To help, you may place a sand bag or rolled up towel beneath your heel to the proper height so you can still keep your foot pressed with a solid foundation even if the heel is raised.

If you have trouble balancing or lifting your leg parallel to your torso in Warrior 3, you may place your back foot on a yoga block for support until you develop the stability and balance to slowly wean away from leaning on it.

You can practice Virabhadrasana 1, 2 and 3 in stillness or weave it within a vinyasa sequence.

When you include the three main warrior yoga poses in your practice on a regular basis will help develop your overall body strength and endurance. They will help you feel focus and calm even through challenges. And they will help you feel powerful like that of the hero Virabhadra who was born from Shiva’s hair when he was needed.

These asanas stimulate both sthrira (steadiness) and sukha (ease) in your body which is described in Patanjali’s yoga sutras.

One of the most important benefits of yoga is how it helps intensity the mind-body connection. Yoga helps you face life with no resistance. It allows you to recognize when to call up strength whenever it is needed, and when to let go when that is needed as well.