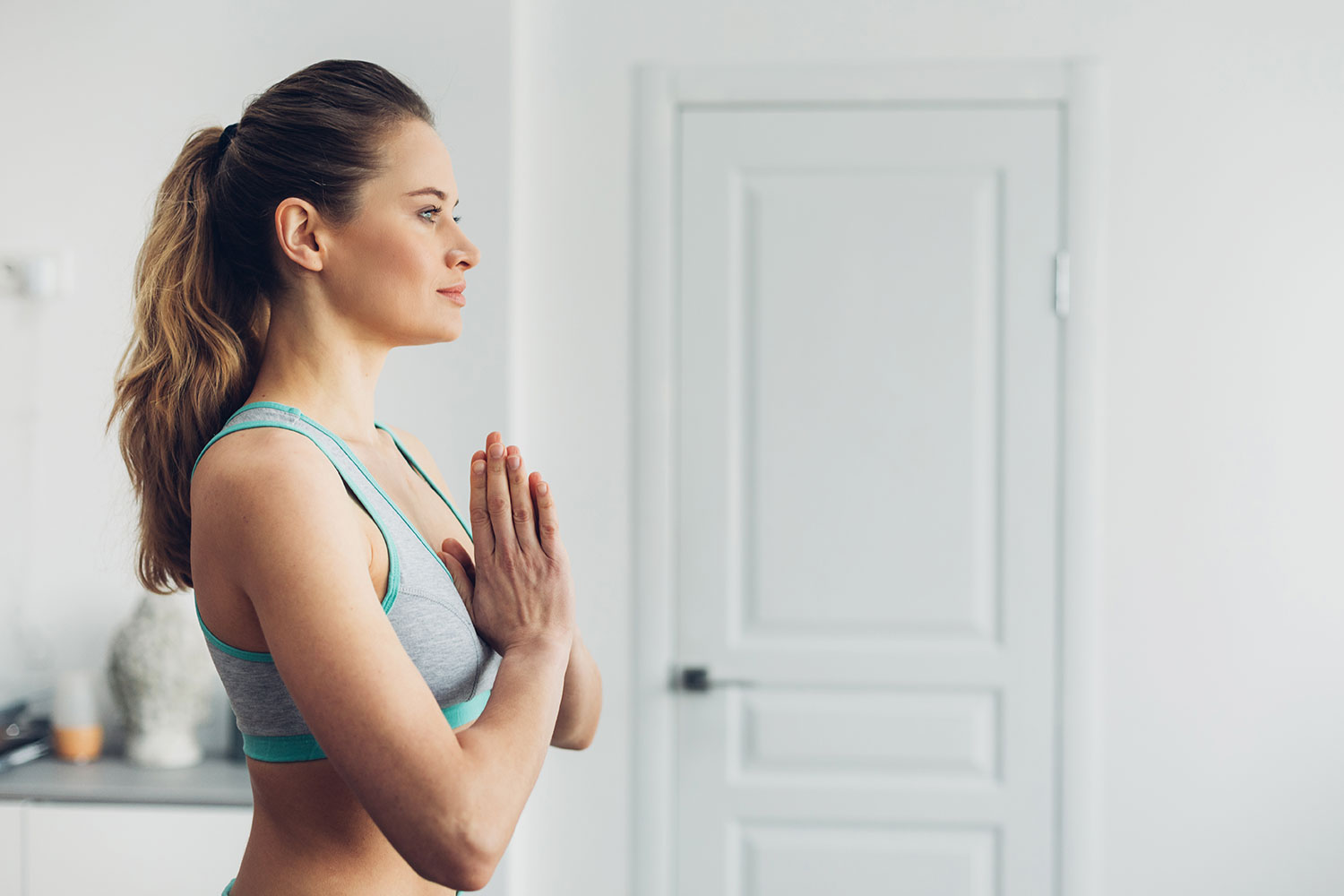 What is Vinyasa Yoga? Everything You Need to Know

If you have ever stepped foot inside of a yoga studio, there is a strong chance that you have heard the term namaste. Typically, the word will be said by a teacher to their students at the conclusion of a yoga class, and paired with an accompanying prayer hand position.

However, even if you have found yourself reflecting it back towards your teacher, do you truly know what namaste actually means? While many of us have a general picture of the word and what it represents, few people in the western world know what the term truly symbolizes, or how it is actually applied in Indian and Hindu culture. Namaste is a greeting used in many Asian cultures where Hinduism is present, and it has a unique, layered meaning that is probably very different than what you may assume. This article will help establish the foundation of namaste in the context of its real roots, as well as how it has transitioned into the western culture.

What is the Meaning of Namaste?

Looking at the etymology of the word helps establish the basic meaning of namaste. Analyzing the word from its Sanskrit roots, the namaste meaning can be broken down into two pieces. Namas translates to either “bowing” or “obeisance.” Te translates to “you.” Put together, the word roughly translates to “I bow to you.” Namah can also be broken down to mean “not me,” which represents the surrendering of ego when someone uses this greeting. In this context, they see the other person they are greeting as an equal. In its roots, namaste represents the recognition of the divine life that exists within the other person, as well as the diminishment of the ego within the greeter.

Beyond the basic translation of “I bow to you,” namaste has been associated with many other phrases that emphasize the recognition of one soul to another. Some common phrases used include:

While the phrases and descriptions of namaste can vary, there is ultimately one common thread amongst all of the meanings. It is a greeting that reflects respect to the other person, honoring and acknowledging the connection and similarity of their souls, regardless of any perceived differences between the two people. It diminishes the ego, so that two people can honor each other’s divine life force without anything getting in the way and obstructing the true intention.

The Use and Spiritual Significance of Namaste

Namaste is a greeting and farewell within the Hindu custom, but it carries much more weight than the typical Western greetings. As mentioned above, namaste represents the acknowledgement of the other person’s soul and divine light, as well as a surrendering of one’s ego in the presence of that individual. By saying or performing the gesture of namaste, the soul of the greeter is bowing to and recognizing the divine life force that exists within the other person that they are greeting.

While namaste may seem like a very serious and highly-respectful way of greeting another person, it is actually more akin to a simple “hello” in terms of its ubiquitousness. Namaste is incredibly prevalent in India, but is also present in other areas of south-east Asia where Hinduism is less common. In these places, the greeting is a typical, every day phrase that is used amongst strangers and friends alike. It is used as both a casual and formal greeting, and is performed for people of any relationship. While it may have more meaningful roots underneath it, it is just as common as saying “hello” in western culture. In addition to its use as a standard greeting, namaste can be used as a way to seek forgiveness from another person due to a wrongdoing.

On the other hand, in Western culture, the namaste meaning tends to move away from its original intention and use. It is generally limited to yoga and meditation classes, whereas, in its roots in Indian culture, it is far more ubiquitous in everyday life. As such, the western idea of namaste tends to be a bit warped from its true meaning, as many people may associate it solely with the spiritual side of yoga, rather than a greeting used in day-to-day life.

If you have some familiarity with the word namaste, you may have heard the word namaskar used in its place. The namaste meaning is essentially the same as namaskar. Like namaste, the namas in namaskar translates to “bowing” or “obeisance”, while the second half of the word comes from the Sanskrit word kara, meaning “action.” Both greetings use the same gesture as well, which will be covered below. Namaskar, however, is used in more formal settings. It is also more likely to be used when greeting a group of people, as opposed to an individual.

The anjali mudra accompanies the use of namaste or namaskar. Anjali means “to offer” or “to salutate”, and mudra means “seal”, so the word and gesture perfectly complement the layered meaning of namaste/namaskar. In addition to using it alongside namaste at the end of class, you will find this gesture within many yoga asanas, such as tadasana or vrksasana.

To make the gesture, you place your palms together at your heart chakra with your thumbs against your chest, which represents the balance between the right and left side. You then close your eyes, and slightly bow your head. The gesture, along with the word, represents a recognition of the life force present within everyone with whom we connect.

The gesture is pretty straightforward, and chances are you’ve already done it if you have been to a yoga class. That being said, there are a few things to keep in mind when performing the anjali mudra. Remember to keep your eyes closed while doing the gesture. It allows you to connect inward and direct your focus towards the person you are greeting, rather than get distracted by any external stimuli. Also be sure that your hands are completely pressed together, and free of any objects that could be getting in the way.

As you are doing the gesture, you should make sure that your intention is pure and focused. You should perform namaste with a positive energy and the true intention of recognizing the soul of the person that you are greeting. The intention is what truly makes the gesture and words powerful, so be sure to approach it mindfully.

When you experience namaste in Western culture, the word is typically verbalized alongside the use of the gesture. However, in India and other Asian areas where namaste is integrated into the culture, the gesture itself symbolizes namaste, and does not necessarily need to be spoken along with it.  It is acceptable to do the gesture with or without verbalizing namaste.

The Meaning of Namaste in Yoga

If you are in the western world and practice yoga, the studio is likely the first place you were introduced to namaste, and your knowledge of the concept may be limited to what you have gathered from your teachers. Due to this, most people who practice yoga in the western world don’t actually have a full understand of the real meaning of namaste—they simply are working off of a version that has been adapted and used for a specific, niche purpose.

Typically in these classes, namaste will be done at the end of class, however some teachers will choose to use it before class as well. The teacher will initiate the use of namaste as a way to show gratitude to their students and recognize the divine light within each of them. The students will follow suit and respond, often with the verbalization of namaste and the anjali mudra.

When looking at the meaning of namaste in yoga, particularly in classes taught in the western world, it is important to recognize that the use has been adapted and evolved from its true roots in the eastern world. In India and other Asian countries, namaste is a greeting and spiritual connection between two people in their everyday lives, rather than simply an aspect of an individual’s yoga practice. While yoga has been a vehicle for introducing namaste to the western world, its true definition and meaning is often glossed over.

You hopefully now have a bit of a deeper understanding of the word namaste. Rather than just a generic term that symbolizes the end of a yoga class, it is a spiritual greeting that is unmatched by any other general greeting in the western world. Next time you find yourself saying namaste, reflect on its real meaning, as well as the intention you are setting behind it.

A Complete Guide to Chakra S...

The Benefits of Yin Yoga