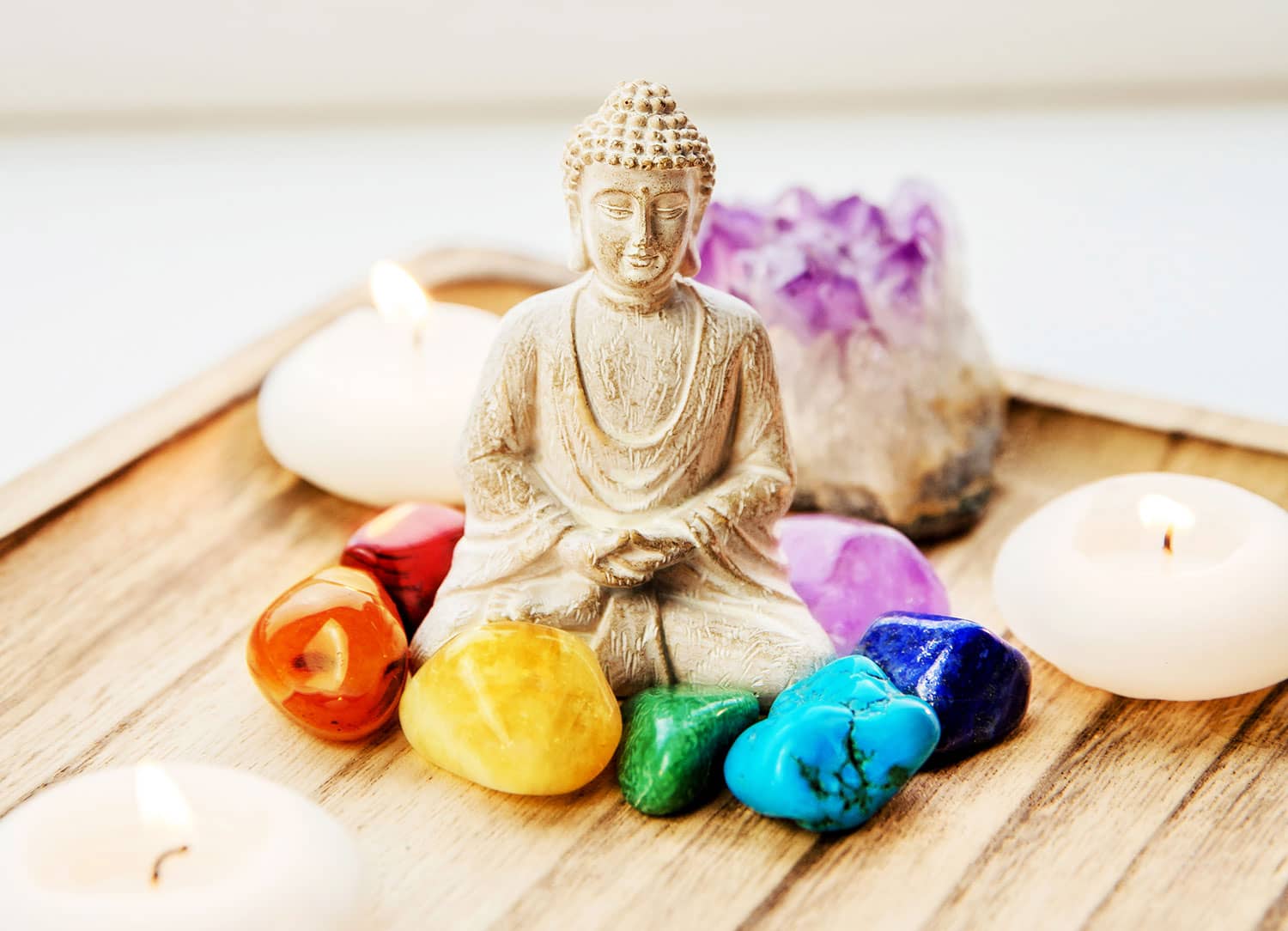 Baby Yoga: Benefits and 12 Poses for New Parents to Try

In the yoga world, a concept known as chakras is often discussed. The chakras are intersections of energy in the body. The human body has seven chakras. Each chakra is associated with a specific body part and a certain type of energy.

Sometimes a chakra can become blocked. This leads to physical or emotional pain and distress. One way to heal these blockages is through the use of crystals. There are certain crystals that align with each chakra. These crystals can help clear energy blockages and enhance energy in the body.

The History of the Chakras

In the 16th century, a book called the Shri-Tattva-Cintamini was written. This book describes how to activate the chakras. The book was translated in 1919 and is the foremost text on Kundalini and the chakras.

The Tantric Academy describes how the chakras were introduced to western culture in the 20th century. C.W. Leadbester wrote a book called “The Chakras”. This book described the chakras as transformers of energy of consciousness. In the 1970s, Christopher Hill associated different colors with the chakras. This idea is prevalent in today’s western view of the chakras. He also linked the chakras to personality types.

Chakras are an esoteric concept that has caught on in the west. Today, they are interpreted differently than they originally were in the Upanishads. In the western world, they help many people deal with energy blockages in a physical and spiritual way.

The 7 Chakras and Their Crystals

This chakra is at the base of the spine. It helps keep us feeling grounded and secure. The root chakra is associated with the element of Earth. Examples of crystals linked to the root chakra are red jasper, ruby, and bloodstone.

Located right below the belly button, this chakra relates to our right to feel. According to healthline.com, the sacral chakra is also responsible for sexual and creative energy. It also determines how we relate to the emotions of others. The sacral chakra is associated with the element of water. Examples of crystals linked to the sacral chakra are orange calcite, goldstone, and carnelian.

Anahata chakra is associated with the heart and lungs. It is related to our right to love and be loved. The chakra goes along with the element of air. Examples of crystals linked to the heart chakra are peridot, garnet, and malachite.

The Vishuddha chakra is in the throat and is related to how we express ourselves and communicate. It is associated with the element of ether (space). Examples of crystals linked to the throat chakra are aquamarine, turquoise, and sodalite.

Anja is the chakra of wisdom and perception! This chakra is related to intuition and expanding vision through meditation. Examples of chakras linked to the third eye chakra are fluorite and quartz.

This chakra is located at the top of the head. It represents infinite expansion, awareness, consciousness, and thoughts. It is linked to a spiritual connection. Examples of crystals linked to the crown chakra are selenite, diamond, and moonstone.

How Does a Chakra Become Blocked?

Now that you are familiar with the 7 chakras, it is important to note that these energetic chakras can become blocked or unbalanced. Diane Malaspina, a Ph.D. in yoga medicine, notes that a chakra becomes out of balance when there is too little or too much energy flow in that area. For example, if there is not enough energy in your root chakra (the chakra related to grounding and security), you may begin to feel insecure and depressed.

In addition, an out of balance chakra can cause physical symptoms as well. According to healthline.com, a chakra that is blocked for a long period of time can lead to disease, musculoskeletal problems, and mental health issues. Feelings of fatigue, depression, anxiety, or digestive issues can all indicate a blockage in a chakra.

I Think My Chakra is Blocked… What do I do?

While many energy healers can help balance your chakras, you can also work to balance them on your own from the comfort of your own home. Practices such as meditation and yoga can help unblock chakras. Another practice is working with crystals.

As mentioned above, each chakra is associated with several different crystals. The first step is analyzing which chakra you feel the blockage of energy in. Having trouble communicating with a loved one? Time to rebalance your throat chakra! Struggling to come up with creative ideas at work? This could mean your sacral chakra is out of balance.

Once you have identified the chakra you want to work with. Grab a crystal and get ready to learn how to work your way toward healing.

What You Need to Heal Your Chakras

Step-by-Step Instructions to Rebalancing Your Chakras with Crystals

Step 1: Identify which chakra you are feeling the blockage in. It is totally possible to be feeling unbalanced in multiple areas of the body and that’s ok! This just means you will be working to balance multiple chakras.

Step 2: Place the crystal in the palm of your hand or on the area of the body where the identified chakra is located. For this part, you can be sitting up or laying down based on where the crystal is being placed.

According to Mind Body Green, here is where to place the crystals depending on which chakra you are balancing:

Step 3: Relax. Take soothing inhales and exhales. Focus on slowing down and smoothing out your breath. Imagine that you are entering meditation or into savasana at the end of a yoga class. Sacred Wellness notes that it is ok if a crystal falls off your body. You can replace it or leave it on the ground because your body can still access that energy.

Step 4: Stay in this state of consciousness for 5-20 minutes to receive benefits.

Step 6: Practice other ways to balance your chakras to go along with your crystal healing. In addition to using crystals, there are other ways to unblock the chakras. Healthline.com describes how the chakras can be balanced through yoga poses, breathing exercises, and meditation. There are different yoga poses associated with each chakra that can help your body heal. For example, if your heart chakra is feeling blocked, try some heart opener poses like camel or bridge. You can also place crystals on your yoga mat as you practice.

Ready to Balance Your Chakras?

In the world of yoga, the chakras are 7 important energy centers within our body that affect how we feel both physically and emotionally. Each chakra is associated with a body part and a set of emotions/feelings. Due to certain events in life, the chakras can become blocked or out of balance. This leads to a variety of symptoms including pain, fatigue, anxiety, depression, and all sorts of other issues. Fortunately, the chakras can be balanced on your own from the comfort of your own home.

Crystals are a great way to rebalance the chakras. Through a calm, meditative process, holding crystals in the palm of the hand or placing them in the blocked area of the body promote healing and the realignment of energy. After a healing session, crystals should be cleansed so that they are recharged for next time. Crystals can be purchased in many places including various internet websites, and at many local yoga studios. Start the crystal healing process today by analyzing your feelings and determining which chakra or chakras are blocked in your body. Next, invest in some crystals and begin the healing process!