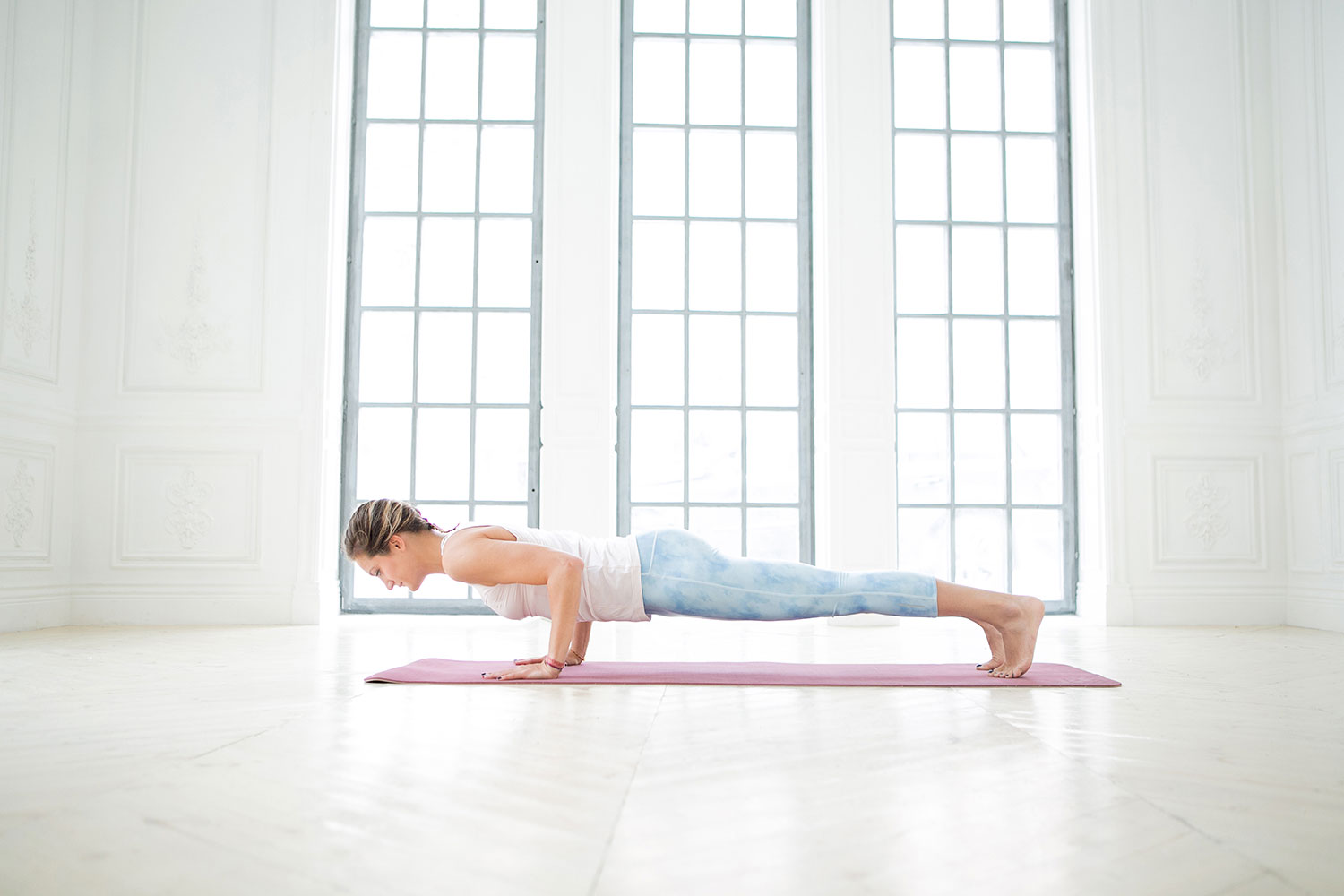 One of the most frequently breezed-through poses in many yoga classes is Chaturanga Dandasana. We find it in most Ashtanga, Vinyasa, and Power Yoga classes and often in Hatha practice, too. Often referred to but not taught, Chaturanga becomes a means of transition rather than an asana in its own right. While it is certainly a pose that carries us to another, it holds incredible meaning and power as a stand-alone posture. A key asana in Surya Namaskar, or Sun Salutations, this pose is a part of the dynamic prayer that worships the sun. Yet even on its own, Chaturanga holds a deeper meaning we tend to miss in our day-to-day practice.

Derived from Sanskrit, we can break the name down into four parts: chatur, meaning “four,” anga, meaning “limb,” danda, meaning “staff,” and asana, meaning “pose.” Stringed together we get the English translation: Four-Limbed Staff Pose.

Chaturanga originated as a way to come into a prostration, or pranam. A pranam can be seen as a salutation, or a bowing to life force. As such, Chaturanga is a powerful pose of surrender – a pose that brings us to bow down. Tantric scholars have translated early tantric texts in which Chaturanga has been noted. Translations show us that prostrations are seen as embodied meditations and acts of prayer, which is why Chaturanga fits quite naturally into Sun Salutations. Traditionally practiced at sunset or sunrise, Surya Namaskar has been a traditional means of revering the sun, Surya. Chaturanga in these traditional practices is therefore deeply acknowledged to be just as symbolic a pose as any of the others in this dynamic prayer.

We do not often hear it spoken aloud in modern yoga classes but each asana of Surya Namaskar has an associated mantra. While not typical, each mantra can be repeated aloud as we come into each pose. The mantra associated with Chaturanga is “om pusne namaha” which translates to, “I bow to the giver of nourishment and strength.” With this in mind and spirit, Chaturanga is a pose that helps us to connect with that which gives us strength and energy – both inside and out. It is said to stimulate the manipura chakra, our energy center of confidence and self-esteem.

Founder of Seattle Yoga Arts, Denise Benitez wrote, “Chaturanga and other poses that demand such attention to the balance between effort and surrender can teach you dharana—concentration or focus.” Dharana is the sixth limb of yoga that helps us to develop our one-pointed attention. As we start to become more aware of Chaturanga as a pose in its own right, we can strengthen this ability to both harness strength and to surrender while holding this pose, even if only for a brief moment.

Chaturanga prepares us for Cobra Pose. As it is the posture in transition that leads us into an open-hearted surrender, it encourages us to release the thinking mind and to ground ourselves in the heart space. We are asked to let go of all that blocks us from complete openness, gratitude, appreciation, and oneness.

Coming into Chaturanga can be done in a few ways. The following instructions refer to the pose as if we are practicing it in a traditional Sun Salutation sequence.

When practicing Chaturanga as a stand-alone asana, breathe continuously while holding the pose. During Surya Namaskar, the pose is performed on an exhalation.

An alternative and slightly easier version of Chaturanga is to hold the pose while supporting the body through the knees. This might be an ideal first version for new yoga students.

There are a few common mistakes made while transitioning into Chaturanga that can cause pain and put unnecessary strain on the body. The first one is leading through the hips. If the hips drop towards the mat before the knees come down, this can cause strain and potentially injury to the back. There can also be a tendency to lead with the chest, which puts strain on the shoulders. Hand positioning is another alignment issue to watch out for; if hands are too close to the shoulders, the bend at the elbow will be sharper than the desirable 90 degree angle. The upper arm should be parallel to the mat and the shoulders lined up above the wrists to create that ideal angle.

When practicing Chaturanga Dandasana, it is crucial to move slowly to avoid injury. Starting with the alternative version of the pose, with knees grounded on the mat before coming into a low plank, will help to strengthen the core and upper body muscles required for the full pose.

It can be challenging to use props during Chaturanga while in the middle of a flow class, but if you are practicing on your own and wanting to explore this pose as a stand-alone, you can use props to support you.

Chaturanga Dandasana is contraindicated with pregnancy, carpal tunnel, and wrist, shoulder, and back injuries. Whenever you are starting a new workout program, it is important to consult with a healthcare practitioner to ensure new poses and workouts are right for you.

This pose engages the entire body and helps to develop strength of a variety of muscles. One key area that is engaged as we perform Chaturanga is the core; abdominals are strengthened as we learn to control and hold this pose. Chaturanga also strengthens the arms and wrists and is a great preparatory pose for arm balances.

Not only does it work the physical body, Chaturanga is a great pose for strengthening our focus and concentration. It requires us to harness our inner strength and confidence as we lower the body with control before coming into an open-hearted pose of surrender.

Yoga is a dance between control and surrender. Joel Kramer

When we bring mindfulness and focus to Chaturanga Dandasana, we see that this pose stands quite sufficiently on its own while also being a movement towards the earth and towards consciousness – a movement towards the “giver of nourishment and strength.” As we practice this pose time and time again with its lesser-known meanings in heart and mind, we might find that it beckons us towards that sweet spot between control and surrender. At the core of it, we come to learn that Chaturanga embodies what it means to practice yoga.