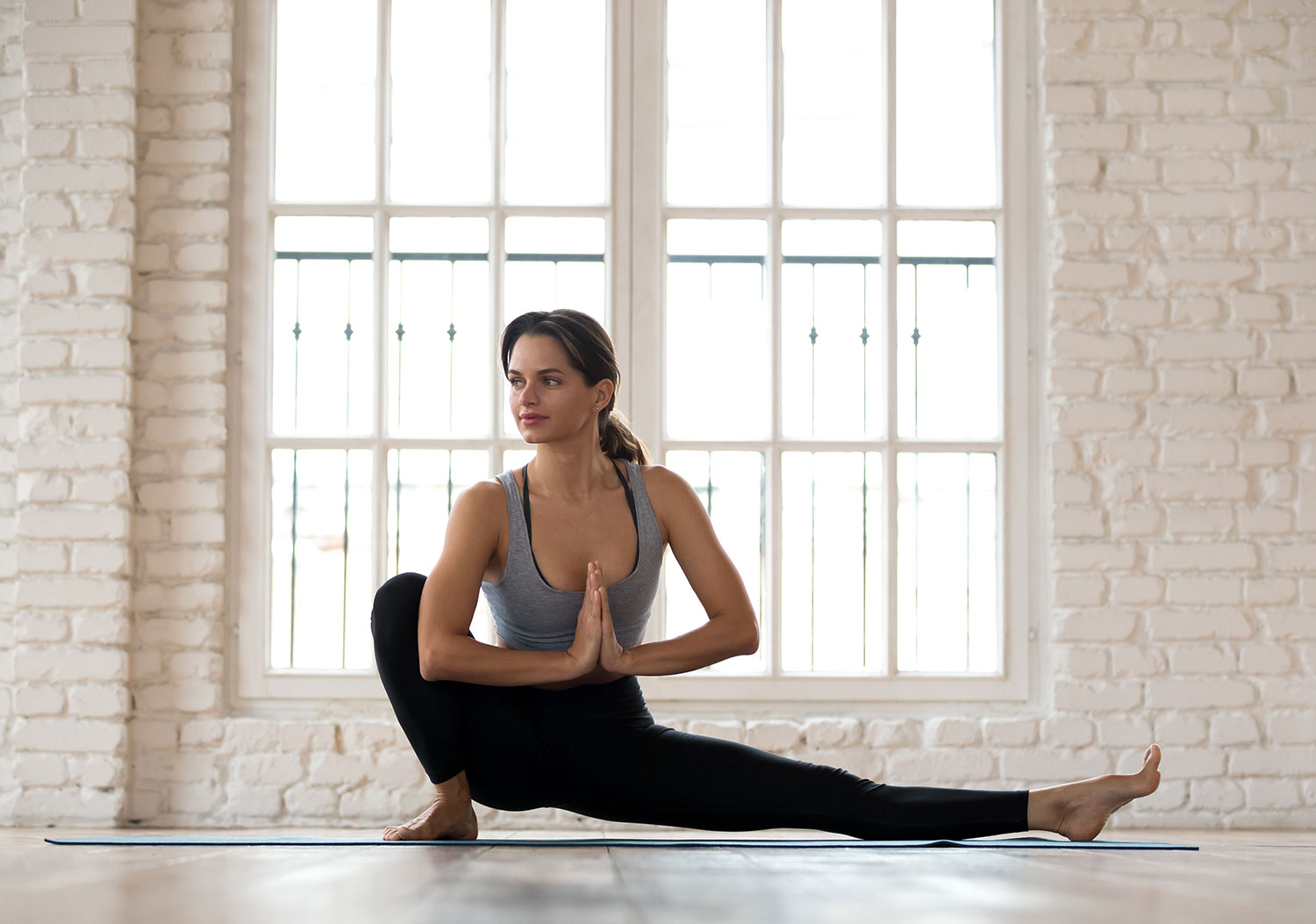 The asanas, or yoga poses, originated as a way to open and prepare the body for meditation. In translation, asana means ‘comfortable seat.’ Practically, a yogi cannot sit in meditation for long periods of time unless their body is open, flexible, balanced, and supple. Not every yoga practitioner has the goal of sitting in meditation for hours on end – but the principle remains true. With asana, the yogi can open and realign their body, and these benefits will carry off the mat and into every physical and emotional interaction they have. One of the most common joints that is misaligned or tight is the hip joint. However, many vigorous styles of yoga do not necessarily target this joint, which needs deep relaxation to open. The yin yoga style is much more appropriate for opening the hips. The following article discusses yin yoga, and useful poses for opening the hips with yin yoga.

What is Yin Yoga?

The yin yoga practice is both gentle and powerful. It is a very slow paced style of yoga. Its benefits lie in depth rather than breadth, as one session may only have 5-7 poses. Each pose is held for a long period of time, letting the yogi breath into the muscles and go much deeper, both physically and emotionally, than they otherwise would.

Yoga is not about touching your toes. It’s about unlocking your ideas about what you want, where you think you can go, and how you will achieve when you get there. Cyndi Lee

Compared to other styles of yoga, yin yoga is relatively recent in origin. It was founded by Paulie Zink, who is an expert in martial arts and felt called to create a slower paced style of yoga. Currently, the only officially recognized yin yoga teacher trainings are offered by Paulie Zink.

Yin yoga is a gentle and calming practice that is particularly effective at lowering stress and anxiety. Physically, it promotes flexibility and mobility in the body. In particular, due to the nature of holding poses for long periods of time, yin yoga targets the connective tissues in the body such as fascia. For many people, fascia can become uneven, causing ‘knots’ or trigger points, which may cause pain or limit mobility. These could be due to a variety of reasons, such as habitual movement patterns, emotional tension, injury, and more. Yin yoga helps soothe and realign the fascia, opening up joints and increasing mobility.

The Importance of Open Hips

Tightness or inflexibility in the hips can affect every aspect of your day to day life. From sitting, standing, walking, and more, the hips are an essential joint in the body that connects your upper and lower body. However, due to sedentary lifestyles becoming more prominent, and desk jobs on the rise, more and more people suffer from hip tightness. Yoga in general can help open the hips, but no style is more effective at opening the hips than yin yoga. This is thanks to the deep fascia work that the slow-paced style of yin yoga makes possible.

Anatomy of the Hips

What does ‘opening the hips’ actually mean? Before delving into the following ten poses, it is important to gain a basic understanding of the anatomy of the hip joint. The hip joint is known as a ball-and-socket joint. It occurs where the round head of the femur (the thigh bone) is inserted into the pelvis (or more specifically, into the acetabulum socket in the pelvis). The femoral head and acetabulum are attached by a ligament, but movement is possible because each bone is covered in smooth cartilage, which helps with sliding movement.

Do not ask for less responsibility to be free and relaxed—ask for more strength! Shengyan

Some people may have issues with the bones, bony cartilage, or wear-and-tear in the hip joint. However, more commonly tightness is due to the muscles that surround the joint. These muscles include the iliopsoas muscle, rectus femoris muscle, quadriceps muscle, Sartorius muscle, pectineus muscle, gluteus muscles, and more. There is also fascia, or connective tissue primarily composed of collagen, which overlays the muscles, and can also cause tightness. Both the muscles and fascia surrounding the hip joint can be opened through yin yoga.

Emotions in the Hips

The anatomy of the hips is obviously important to understand, but beyond anatomy lies the more esoteric concept of emotions being stored in the hips. This might seem like a foreign concept to some people, but just wait until you experience the emotional release of a deep hip opener. It is commonly acknowledged that trauma and repressed emotions are stored in the hips. This could be due to the body’s typical response to stress: The knees are tucked in and the hips are tightened in an attempt to protect the soft middle of the body. As such, relaxing the hips requires releasing this history of stress and tension. Additionally, the psoas muscle is an important player here. This is a unique muscle that connects the vertebrae and the femur by passing over the hip joint. The psoas also connects to the diaphragm, where breath is controlled. This gives it a link to the sympathetic and parasympathetic nervous systems, responsible for whether the body is in ‘fight or flight’ mode. As you can see, this incredible complex muscle has huge potential for both storing and release emotions, and it is an important muscle in the hips.

The following yoga poses target the hip joints and promote relaxation and openness. When held for a minimum of two minutes, combined with deep yogic breathing, they will help increase flexibility in the hip joints. Each pose is an appropriate addition to a yin yoga practice centered around opening the hips.

To perform wide knee child’s pose, kneel on your mat, untuck your toes, and sit your bottom back on your heels. Now, separate your knees a foot apart, and walk your arms forward on the mat. Eventually, your torso should be resting in between your knees, and your forehead resting on the mat. Hold here for a minimum of 10 breaths, feeling your belly fill with breath. Notice the gentle opening at your hip joint as you relax into the pose.

Happy baby pose is a fun and playful pose, that is very helpful for opening the hamstrings and fascia that connect to the back of the hip joint. To practice happy baby, which is traditionally performed near the end of a yoga practice, lie flat on your back. Bend your knees and find a clasp with your same side hands to feet. The clasp can either be on the inside or outside soles of the feet. Bring your knees toward your arm pits and let the soles of the feet face up toward the ceiling. Rock side to side here, feeling your hips, glutes, and iliotibial band begin to open.

Yogi squat pose, or malasana, is a wonderful hip opener that can also relieve pressure in the pelvic floor muscles. Start by standing on your mat with your feet a little wider than hip’s distance apart, and toes pointing at a 45 degree angle away from each other. Bring your hands to Namaste at heart center. Breathe in and open, and exhale and squat down into your yogi squat. The bottom and tailbone should be reaching toward the mat, and the chest and heart open. Keeping the hands in Namaste, bring the elbows to the inside of the knees and press evenly here. Stay in yogi squat, feeling your inner thighs and hips releasing, for a minimum of five breaths.

Bound angle pose is a very popular yin yoga pose and accessible to most people. To practice the pose, sit on the mat with the soles of the feet pressing against each other, and the knees falling open. You can either sit upright, or fold forward over the legs. This pose stretches out the adductor muscles, or the inner thighs. It is also said to relieve depression, fatigue, and improve circulation.

Low lunge pose could be considered one of the more active poses in a yin yoga practice. However, when opening the hips it is also important to strengthen the muscles that surround and support the hips, so as to avoid injury. To practice low lunge, start in crescent pose (also called anjaneyasana). Place the hands palms down on either side of the front foot, leading forward into the pose. This will give a good stretch to the back leg’s hip flexor. Repeat on both sides.

You can get a very deep stretch in both hips with lizard pose. It is the ideal pose to follow low lunge, if your body is prepared to go deeper. Start in low lunge, and plant both hands to the inside of the front foot. From here, you can try multiple variations to deepen the pose. For instance, you could lower the back knee to the mat, which intensifies the stretch in the back leg’s hip flexor. You can also lower onto your forearms and let the front knee fall open, which brings a stretch to the front hip.

Reclining hero pose starts out in hero pose – kneeling on the mat with toes untucked, sitting with the bottom between the feet. Then, the yogi uses their hands to help them lie flat on their backs on the mat. This pose gives a very intense stretch along the tops of the legs, including the hip flexor muscles. It is also useful in alleviating digestive troubles and sciatica pain.

Corpse pose, or savasana, is always performed at the end of a yoga practice. It is usually done by lying flat on your back, palms open toward the ceiling, and meditating upon the previous practice. Corpse pose is not necessarily a hip opener on its own, but the yogi can bring the principles of corpse pose to any final resting posture. For example many of the previously mentioned hip opening postures, such as reclining bound angle pose or wide knee child’s pose can be used to replace the classic supine position. This brings an extra bit of hip opening to any yin yoga practice.

Hip opening is a long term process. To make a lasting change in hip flexibility, a commitment must be made to practice yin yoga, and these previous poses in particular, on a regular basis. However, the commitment will reap many benefits, ranging from increased mobility and reduced pain, to even emotional freedom.

Yin Yoga Poses That Will Lea...

A Guide to Yoga Trapeze: How...