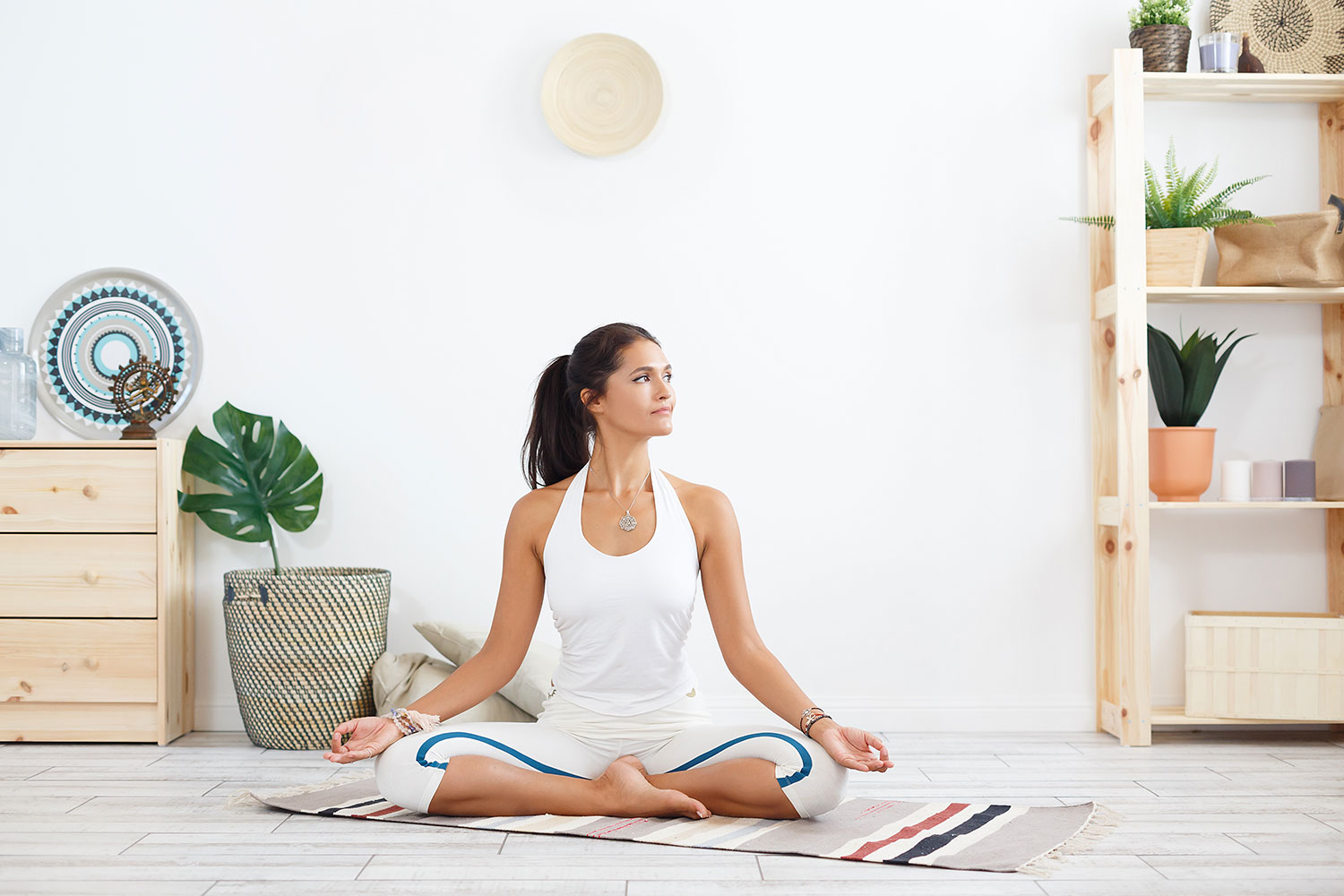 15 Yoga Tips for Anyone with a Bigger Body

Yoga is often regarded as intimidating to beginners. When the media often portrays yoga as advanced, bendy poses and lean, lithe bodies, it is not a surprise that many people are hesitant to start a yoga practice. The truth is, though, yoga is for everyone. It is so much more than “pretzel legs” or the splits. It is an accessible practice that extends beyond physical poses, and includes the way yogis see the world around them. It is a thousands of years old spiritual practice that is incredibly complex, but there is always a way in for beginners. The following article will take you through important yoga basics for the beginner who is interested in yoga, but maybe a little bit intimidated.

The most common way to begin yoga is through a physical practice. This can be done at home with videos or articles, at a gym, or at a yoga studio. Most gyms or studios will provide a mat for use, so all the beginner yogi needs to bring is their body and some comfortable athletic clothing. Yoga classes teach a series of poses, or asana in Sanskrit. These physical poses are linked with breath. The yogi breathes and flows through a series of poses, and ends the class in traditional savasana, lying on their backs. In the western, “pop culture” style of yoga, this is often where the practice ends.

Without proper breathing, the yoga postures are nothing more than calisthenics. Rachel Schaeffer

However, yoga is so much more than its physical postures, or asana. There is a long line of history and philosophy behind yoga, tracing to its roots in India 5,000 years ago. In true, traditional yoga, the poses are just a small piece of the bigger puzzle of yoga. Meditation, breathing, sense withdrawal, and more are equally valued. To truly understand the “basics” of yoga, it is important to delve into all of these areas.

Yoga is a Sanskrit word which translates to “union” or “yoking.” This refers to the yoking of mind, body, and spirit. It also refers to the union between all beings and the universe. As such, yoga teaches that the Divine and the Self are one. It is this premise that guides all the other aspects of yoga.

The sage Patanjali taught that there are eight limbs of yoga, of which the physical postures (asanas) are only one. Therefore, yoga is a holistic practice that extends far beyond the mat and the physical body. It is not a religion, rather it is a way of viewing the world and connecting with the Self.

Yoga can be traced back to 5,000 years ago in the ancient Indian texts called The Vedas. The Vedas are the first known texts to discuss yoga, which therein is described as union with the divine. This is the beginning of the pre-classical era of yoga, when other important texts such as the Upanishads and Bhagavad Gita were recorded. These texts are very violent, and discuss ritual sacrifice and epic wars – very different from the reputation yoga has in modern times. The idea of yoga evolved in the classical yoga period, when Patanjali created his Yoga Sutras and eight-limbed path of yoga. By creating the sutras, which offer philosophical guidance for the yogi, the classical period bridged the original ancient texts with more internal interpretations of the sacrifices that yoga requires. It was in the post-classical yoga period or modern period, beginning in the early 19th century, that yoga was brought to the West. This was done by sages such as Shivapuri Baba, Swami Vivekananda, Yogananda, and B.K.S. Iyengar. The physical practice of yoga, known as the Hatha yoga style, was emphasized and popularized during this period by yogis such as Indra Devi in Hollywood. The pre-classical and classical texts are certainly still studied in modern times, and make up the backbone of yoga philosophy. However, the practice of yoga definitely looks different now than it did 5,000 years ago in India.

As mentioned, Patanjali was a central figure during the classical period of yoga, and his teaching had a profound impact on all yoga to come. Patanjali is known for creating the Yoga Sutras, which are a collective of sutras (short, terse sayings) that teach the yogic way of thinking and living. The Yoga Sutras remain a foundational text still taught in most yoga teacher training programs. Within the sutras, Patanjali describes yoga as an “eight limbed path.” The eight limbs of yoga demonstrate that yoga is a truly expansive and spiritual practice that is differentiated from exercise regimens through its holistic approach. The eight limbs of yoga include:

Yama: The Yamas are ethical restraints that the yogi must follow to live peacefully in tune with the universe. There are five Yamas, including Ahimsa (non-violence), Satya (truth), Asteya (non-stealing), Brahmacharya (self-restraint), and Aparigraha (non-grasping).

Niyama: The Niyamas are the second limb, and are ethical observances. They are more internally focused than the Yamas but are an extension to the foundation of the Yamas. The Niyamas include Saucha (purity), Santosha (contentment), Tapas (discipline), Savdhyaya (self-study) and Ishvara Pranidhana (devotion).

Asana: The asanas are the physical postures of yoga. They are the most recognizable limb of yoga, particularly in the West where they define most yoga practices. The word asana actually means “seat.” The yogi practices the asanas so they can “sit” in and through any mental, emotional, spiritual, and physical distractions.

Pranayama: The fourth limb of yoga, pranayama, refers to breathing practices. The breath is integral to yoga, and each asana is paired with either an inhale or exhale. There are specific pranayama techniques such as ujjayi, nadhi shonana, and more that elicit particular responses.

Pratyahara: The fifth limb, Pratyahara, refers to sensory withdrawal. The yogi who is practicing Pratyahara is equanimous and not affected by external circumstances.

Dharana: Dharana means concentration, and is often associated or confused with Pratyahara. Whilst Pratyahara deals with external stimuli, Dharana instead means controlling the distractions of the mind.

Dhyana: Dhyana is seventh limb of yoga and refers to meditation. Meditation builds on the skills built in all previous limbs, so the yogi can experience free flowing contentration without focus.

Samadhi: The final limb of yoga is Samadhi, and is the ultimate state of ecstasy or nirvana. It is achieved when all other limbs are effortless. In Samadhi, there is no ego, only oneness with the universe and the Divine.

It is recognized that there are four general paths of yoga, each differing in how they are physically practiced, as well as their interpretation of yoga philosophy. The four paths are outlined below:

Karma: Karma yoga is the path of action. It was first described in the Bhagavad Gita and the Upanishads. In Karma yoga, the yogi acknowledges the consequences of all actions, and brings the mindfulness of yoga into every action they undertake.

Bhakti: Bhakti yoga is the path of love and devotion. It was also first described in the Bhagavad Gita. In Bhakti yoga, the entire yoga practice is done as worship to a personal higher power.

Jnana: Jnana yoga is known as the path of knowledge. It involves deep knowledge seeking and introspection and is regarded as the most direct path to enlightenment, but also the most challenging.

Raja: Raja yoga is also known as ashtanga yoga, which emphasizes the eight limbs. Unlike the other three paths of yoga, Raja yoga was first described by Patanjali rather than in the Bhagavad Gita. The word Raja translates to “King” and is regarded as the Kind path.

What the beginner yogi should take away from this is that yoga is a diverse practice. There are many ways to interpret yoga philosophy and the ancient texts. Just as there are unique paths of yoga, no two people will even experience yoga the same way.

The four paths of yoga have ancient roots in the Bhagavad Gita text, and refer to spiritual and philosophical differences in interpretation. There are also more modern types of yoga, that differ in their physicality. When a beginner yogi is looking to attend a public yoga class, they may come across these many different styles, but be unsure of the differences between them, or which would be best suited to them. Whilst there are dozens of different kinds of modern yoga, here are a few of the most common:

Vinyasa: Vinyasa is a flowing and dynamic style of yoga. It usually includes sun salutations, a series of flowing poses, and finishing restorative postures. The term “vinyasa” also refers to a specific sequence of lowering from plank through chatturanga (elbow height), opening up into a back bend (upward facing dog or cobra), and pressing back to downward facing dog. This short vinyasa sequence is used repetitively to link together poses throughout the practice.

Ashtanga: Ashtanga yoga is similar to Vinyasa in that all the poses are linked together. However, the Ashtanga practice is very regimented and consists of four series of specific sequences. So, for example, an Ashtanga primary series class anywhere in the world will always teach the same exact sequence of poses, in the same exact order. Ashtanga is a very traditional style that requires intense devotion. The word Ashtanga itself refers to the eight limbed practice of Patanjali.

Hatha: Hatha yoga is a very broad category that really just means physical yoga. Technically, most other styles of yoga such as Vinyasa and Iyengar are considered Hatha yoga styles. In modern times, if a class is labeled as a “Hatha” class it is often a gentler style, with poses taught in a less connected manner than Vinyasa.

Iyengar: Iyengar yoga is a style that was created by B.K.S. Iyengar. This is a very precise style of yoga that focuses on exact anatomical alignment.

Kundalini: Kundalini yoga is a unique style of yoga that aims to release the Kundalini energy within the body. It does this through free flowing movement, mantras, meditation, and more. It has links to Tantric Hinduism.

Remember that all yoga is unique to the individual, and this applies to yoga teachers as well. Many yogis find that they connect with specific teachers or gurus, rather than a particular style of yoga. Two teachers teaching the same style of yoga may instruct completely differently. This is just a reflection on their own unique Self.

It is clear now that yoga is much more than the physical postures taught during most yoga classes. To truly grasp the basics of yoga, this base knowledge of yoga history and philosophy is important. By familiarizing oneself with the roots of yoga, the practice, and ultimately the self, can be better understood.