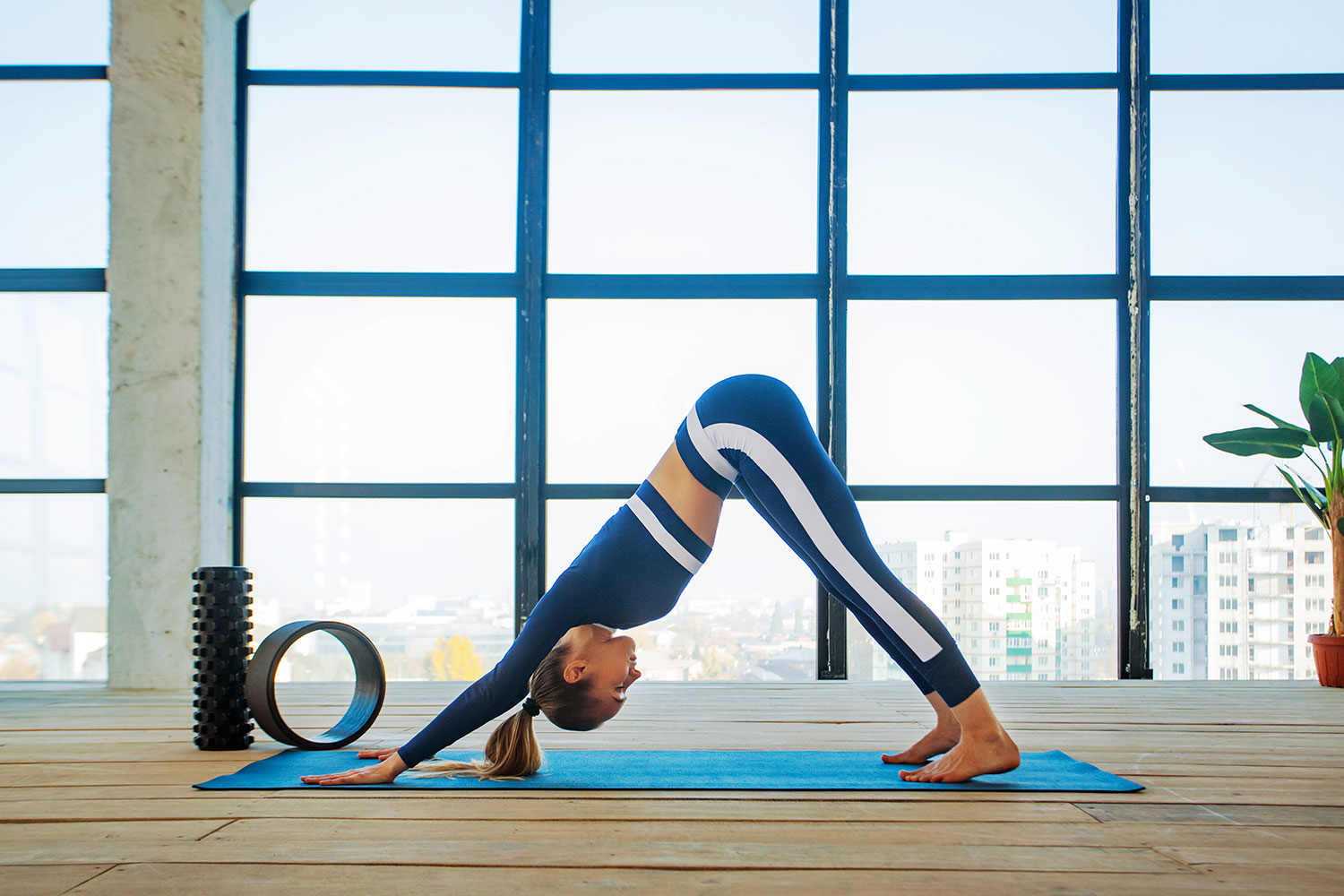 Guide to Common Sanskrit Symbols: History and Meaning in Yog...

Almost all yoga classes begin with some form of sun salutation during the warmup. This series of postures generates heat in the body getting the practitioner prepared for the practice. In addition, it begins the process of associating breath with movement.

The Sanskrit name for sun salutations is Surya Namaskar. Surya means sun and Namaskar means respectful greeting. There are three different Surya Namaskars that can occur during yoga classes. These variations are known as Surya Namaskar A, B, and C.

Each sun salutation contains the same basic flow and sequence of postures just with some different variations. Today we are going to focus on the history, benefits, and process of Surya Namaskar A.

To understand the significance of the sun salutation to the yoga practice, it is important to start from the beginning. Spiritually, the sun is a very important part of Indian history and culture. The Sanskrit word for sun is Surya.

The sun is mentioned in multiple ancient Indian scriptures like the Rig Veda. The Rig Veda is one of the four texts that make up the Vedas which are the oldest scriptures of the Hindu religion.

Yoga International tells of the ancient story of the power behind Surya, the sun. The Yoga Sutras by Patanjali talk about Ishvara as being the timeless teacher within us. In ancient Indian culture, the sun was often seen as the ultimate teacher.

The story goes that Hanuman, a monkey, put the sun in his mouth as a baby. The world went dark and stayed that way until one of the Gods threw a thunderbolt at Hanuman’s mouth and the sun came out.

After this incident, Hanuman needed a teacher. His mother suggested that he ask Surya, the sun. At first, Surya said no. The sun said he must always keep moving and wouldn’t have time to stop and teach Hanuman.

Hanuman said that he could keep up with Surya and finally Surya agreed. He became a wonderful student and learned the Vedas in a week. Hanuman offered his thanks and gratitude (namaskars) to Surya, thus creating Surya Namaskar.

Many yoga poses have wonderful stories behind them. Knowing and understanding the stories can help deepen your practice beyond simply moving through the postures on your mat.

According to Yoga Journal, there is a bit of a debate about when the actual Surya Namaskar sequence originated. Some say it started during Vedic times around 2,500 years ago. Others say it was created in the 20th century in India and then spread to the West in the early 1900s.

Surya Namaskar C involved 12 poses. Practitioners start in mountain and flow through forward fold, lowering all the way down, and low cobra before making their way to downward facing dog.

Surya Namaskar A adds onto C by introducing chaturanga dandasana and upward facing dog which is different from C where practitioners lower all the way down and then rise into low cobra.

Surya Namaskar B is the most complex of the sun salutations. This sequence brings in utkatasana (chair pose) as well as Virabhadrasana 1 (Warrior 1.)

Surya Namaskar has many different benefits for your health. It is truly a sequence that is good for the whole body. From the mind to the muscles, sun salutations are great to practice every single day.

Sun salutations are a great thing to do first thing in the morning. Not only because the sun is rising, but because the sequence stimulates multiple systems in the body.

Art of Living notes that by doing sun salutations, you are stimulating your metabolism and the digestive, respiratory, circulatory, and reproductive systems within the body. In addition, the sequence is a good cardiovascular workout. If you wear a heart rate monitor or tracker, you will notice your heart rate increasing after a few rounds!

Surya Namaskar is good for the muscles and joints. Flowing between the poses will make you stronger and more flexible.

The sequence can also reduce stress and anxiety. By linking breath to movement, the mind has a chance to slow down and release anxious thoughts.

While many yogis practice yoga for the physical and mental health benefits, many others also use yoga as a spiritual practice as well. In addition to strengthening and stimulating the physical body, for some, sun salutations also have spiritual benefits.

In yoga, chakras are known as points of energy within the body. There are seven chakras throughout the body. Each chakra is associated with various body parts and universal rights.

The Manipura Chakra is also known as the Solar Plexus Chakra. It is located behind the naval and is connected to the sun. According to Art of Living, practicing Surya Namaskar expands the Solar Plexus which increases creativity and intuition.

If this chakra becomes blocked, feelings such as sadness and depression may arise. Some believe that by doing these Surya Namaskars, the Solar Plexus will expand and become unblocked.

I’m Ready to Learn Surya Namaskar A, What Do I Need?

Here is what you need to be able to do Surya Namaskar A:

Start your journey with Surya Namaskar A in the morning. While it can be done at any time of day, there are many benefits to the body to practicing the sequence when you first wake up.

Grab a yoga mat and some comfortable clothes and setup in a quiet space. It’s not necessary, but you may want to light a candle or diffuse essential oils to create a calming space. If you are someone who likes the support of yoga blocks, grab a couple of those as well.

In addition, you will want to perform Surya Namaskars on an empty stomach. The sequence contains a lot of up and down movements that can be uncomfortable on a full stomach.

One more optional item you might want to grab is a journal. Writing about your yoga is one of the best ways to deepen your practice. Write down how you are feeling before the sun salutations. Afterward, write how you feel and what you noticed during the practice.

The journal will help you see the benefits you are receiving from the sun salutations as well as any emotions that are coming up during the practice.

Tadasana (Mountain Pose) – Start standing in mountain at the top of the mat. Feet should be hip-width distance apart and hands can be in prayer position at heart center or resting by your side. Crown of the head is reaching toward the ceiling and shoulders are relaxed. Make sure there is a micro bend in your knees so that they are not locked. This is the perfect time to set an intention for your practice.

Utthitta Tadasana (Mountain Pose with Arms Overhead) – On an inhale, raise both arms out and up so that arms are overhead, and fingertips are reaching toward the ceiling. Get long in the spine and feel the elongation from fingertips to feet. If you are called to do so, send your love and gratitude to the sun.

Uttanasana (Forward Fold) – On an exhale, fold forward, crown of the head reaching toward the ground. Knees can be bent to take pressure off the lower back. Naval is drawing into the back body. Fingertips can rest on the floor or a block.

Ardha Uttanasana (Halfway Lift) – On an inhale, slide the hands up the shins lifting the torso halfway. Spine is elongating while the crown of the head is reaching forward.

Kumbhakasana (Plank Pose) – Exhale and plant your hands on the mat and step both feet back into plank. Arms are lengthened, shoulder-width distance apart, heels are pressing toward the back of the mat. Gaze is down at the mat. Core should be strong and engaged here. You are only in plank for a brief amount of time because as you continue to exhale you will lower down in the next step.

Chaturanga Dandasana (Four-Limbed Staff Pose) – As you continue your exhale from plank, lower halfway down as if you are doing a pushup. Fingertips will face forward while elbows face the back of the mat as you lower down. Again, staying strong throughout the entire core.

Urdhva Muka Svanasana (Upward Facing Dog) – On an inhale, flip the feet so that the tops of the feet are pressing into the mat, straighten the arms, draw the chest forward, extending the spine.

Adho Mukha Svanasana (Downward Facing Dog) –  On an exhale, flip the feet, send the hips up and back. Lengthen through the arms and spine as hips reach toward the ceiling in this upside-down V shape. Knees can be bent if needed and heels are reaching toward the mat. It is ok if they don’t touch.

Uttanasana (Forward Fold) – On an inhale, make your way back to the top of the mat into a forward fold. You can get there by stepping, hopping, or floating.

Tadasana (Mountain Pose) – On an exhale, release the arms by your side or in a prayer position at the heart center. This is another opportunity to express gratitude for the sun and the practice.

Repeat these steps again. There is no set amount of times you must do Surya Namaskars. Certain practices require a set number of rounds, but as you explore your own practice, do what feels right for you. Try to do at least 5 every morning to fully feel the benefits. If that feels like too much, start with less and build up to it. Over time, you may want to increase your number of rounds.

Don’t worry if you can’t remember each step at first. With consistent practice, you will get the sequence down. If you miss a step, that’s ok! If you add a step, that’s ok too! Free your mind of judgment and focus on the breath and the movement instead.

If you find yourself struggling with a pose in the sequence, take the time to isolate that movement and work on it. Focus on alignment and engaging the proper muscles. Let go of expecting the pose to look “perfect.” This is your practice and it is unique to you.

Last but not least, deeply focus on letting breath guide movement. Don’t move onto the next pose until the breath is fully complete. If you get lost, keep in mind the following tip. Inhales typically go with expansive poses like mountain with arms overhead and exhales typically come when you are contracting or folding in like with forward fold.

Move, Breathe, and Salute the Sun

Try out the Surya Namaskar A tomorrow morning. Get up, get dressed, roll out your yoga mat and get started. Take some time before and after the practice to journal. As you consistently practice sun salutations it can be nice to go back and read about the physical and/or spiritual benefits you are experiencing.

Surya Namaskar A is something simple and easy that can be added to your daily routine. As you form your consistent practice, you will notice the physical and mental benefits of going through the sequence each morning.

If the morning doesn’t work for you, no worries! Sun salutations can be performed at any time of the day. If you already have an established yoga practice, make sure you are including sun salutations as a way to warm up the breath and body at the beginning of practice.