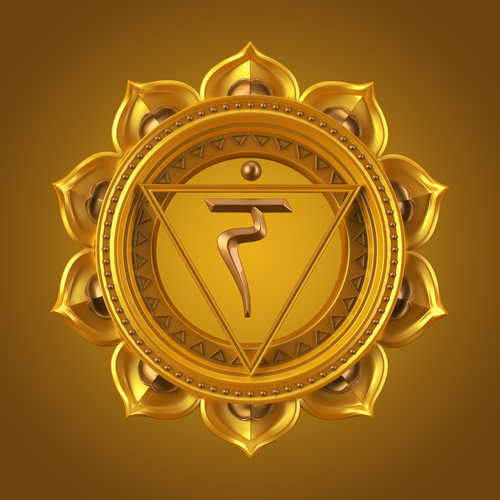 Anjali Mudra: Guide to the Deeper Meaning and Benefits of Th...

Manipura or the navel chakra is responsible for our sense of self. This chakra regulates our self-esteem, personal identity, willpower, and sense of purpose. Physically, it’s responsible for digestion and metabolism. While keeping the navel chakra in balance is required for our health and well-being, it is part of an entire system that helps keep us physically, mentally, and emotionally healthy while connecting us with the rest of the universe. Yoga practices can help bring the third chakra inline when it is deficient or there is excess energy.

Chakras exist in all of us and are frequently referred to in yoga, Ayurveda, and meditation. There are seven chakras located along the spine, each considered to be a wheel of energy moving energy up and down the body. This system helps keep us healthy from a physical, emotional, and mental standpoint. Because each chakra moves energy up and down when one chakra is out of balance either being containing deficient, depleted, or excessive energy, it affects the entire system.

There are seven chakras that exist in all of us. They include:

While this article will reflect on the third chakra, it is important to have a working knowledge of all seven chakras to keep the mind and body in harmony.

The third chakra represents our power in the world. Enclosed in this lotus wheel of energy is a fiery red inverted triangle. This symbolizes fire and the movement of energy downward. Kundalini energy is unable to move upward until it is pierced. This chakra has ten lotus symbols representing the following mental states: spiritual energy, thirst, jealously, treachery, shame, fear, disgust, delusion, foolishness, and sadness as well as ten pranas: prana, apana, samana, vyana, udana, naag, dhananjaye, devdutta, kurma, and krikil. Manipura chakra develops between ages 18 months to four years old. As it forms, the individual requires appropriate discipline, encouragement of self-confidence, playfulness, and support for independence to help develop it.

When it comes to the idea of power, there are varying degrees of it. Often in today’s society, power for one person or group usually comes at the expense of another. This combination of power imbalance means that some people have excess energy in their third chakra while others are deficient. Cultivating our own power means finding balance in establishing our own personal power to lift us up move us forward while carrying others with us versus leaving them behind or pushing them down.

This chakra is a perfect example that when individual chakras are depleted or excess in energy, there is a direct impact on the health of the chakras surrounding it. When an individual lacks basic survival needs from the root chakra or any sort of pleasure in their lives, it is easy to feel powerless. When there is excess in Muladhara and Svadhishthana, there can be an abuse of power, putting our own needs and wants at the expense of others.

When the third chakra is in balance, we have strength and freedom. We emit a natural self-confidence, discipline, and balanced nature. There is a sense of being able to meet life’s challenges, act responsibly, and have a warm personality.

When the third chakra is deficient it manifests itself in the body. Symptoms of a deficient third chakra included low energy, feeling physically cold, poor digestion, and addiction to stimulants. Mentally and emotionally it shows up in people as being easily manipulated, lack of follow-through, low self-esteem, unreliability, and a victim mentality.

Excess of third chakra energy also shows up in the mind and body, almost the exact opposite of when it is deficient. In the body, it shows up as being attracted to sedatives and hyperactivity. People may need to be right at the expense of others’ thoughts and feelings. They might be deceitful, manipulative, have violent outbursts, arrogant, and overly competitive.

To help bring the third chakra in balance, a variety of practices can be used. When it is deficient, individuals can try to take more risks. When in excess, stress reduction techniques can help bring the chakra into harmony. Physical activity that works on the core or is vigorous can help. Grounding practices can also help.

Start in standing posture. Rotate the feet so they are facing forward, avoid angling the feet. Firmly press down into the feet feeling a connection to the earth. Activate the legs so the muscles are engaged and pressure is being lifted off of the knee caps. Let the tailbone release downward while the top of the head extends towards the sky. Bring the navel towards the spine. As you hold here, breathe deeply. It could be helpful to envision a mountain, staying steady regardless of the weather patterns surrounding it. Hold for 15 – 25 breaths.

Step the right foot back and lift the heel. The toes are pointing forward. Bend the left knee up to 90 degrees without overextending the ankle. Like mountain pose, lift up through the torso. Bring the hands into prayer. Rotate at the waist and bring the right elbow to the outside of the left thigh, reach the top of the head forward while lengthening through the spine. Hold for 15 breaths before repeating on the opposite side.

Step the feet out wide and rotate the toes on the right foot towards the right. Extend the arms outwards inline with the shoulders. Rotate at the waist towards the right. The left hand will reach down towards the floor. If it cannot reach, place a block or chair place in front of the right leg as a support. The right arm reaches towards the sky with the intention of opening the chest. Hold for 10 breaths and practice on the left side.

Come into a Table pose and step the feet back. The toes are curled under, the heels and lifted and the legs are engaged. Using your core strength, keep the body stable. The hips should neither be sagging or lifted up but rather imagine keeping the back of the neck and tailbone in line with each other. The legs are engaged. Hold for ten to fifteen breaths.

Lower onto the belly with the feet hip-distance apart. Place the hands underneath the shoulders with the elbows pointing back. Gazing forward lift the head, chest, and upper abdomen off of the mat while keeping the lower belly and hips pressed down on the mat. Hold for five to ten breaths.

Start by lying down on your belly and bending the knees. Reach behind you for either the tops of the feet or the outsides of the ankles. If you cannot reach, use a strap and place it around the ankles. Bringing the shoulder blades together, lift the legs, head, chest, and abdomen up as high as you can while gazing forward. Hold for five breaths before lowering down. Practice this posture three times. After completion, lower the whole body down, bend the knees and let the feet sway from side to side for at least five breaths.

It could be helpful to set a timer between five to fifteen minutes. Lie down on your back and come into Corpse pose. Allowing the body and breath to settle down and notice the body lying on the mat. Without falling asleep take time to actively relax. If you notice the mind begins to wander try to bring you attention to either the breath, sounds in your space, or the body. Rest here with an attitude of gentleness and kindness until your practice is complete.

Yin Yoga Sequence for an Excess of Third Chakra

When the third chakra is in excess, instead of working on abdominal strength as its practiced when it is deficient, the practitioner needs more grounding practices and a way to release the energy that is stuck in the chakra. Heart opening postures and slower practices can help release this energy.

Yin Yoga is slow grounding practice where each posture is held for long periods of time. When practicing this sequence, start each posture at only 75% of your ability. The practice is to surrender not to strive for a physical goal. For each pose below, set a time for 3-5 minutes per pose. For Savasana, rest for ten to twenty minutes.

Start in Table posture and bring your knees to the edge of the mat with the big toes touching. Lower the glutes towards the heels as you extend the arms forward opening up the chest and shoulders. To support your practice, it could help to place a folded blanket underneath the knees or a bolster underneath the chest.

Start in Table posture, keep the hips above the knees as you extend the arms forward and lower the forehead onto the floor. This is an intense posture. To support your practice for the long length of time, you can place a block underneath the head or a bolster under the torso.

Start in Staff pose and bring the feet towards the groin. Let the outsides of the knees release downward towards the floor bringing the soles of the feet together. Fold forward at the waist. The hands can either be placed on the floor or you can lower onto a bolster supported by blocks.

Start in Staff pose and place two blocks behind you. One will support the body underneath the shoulder blades, the other will be placed under the head. Begin to lie back using the blocks as support. The arms can either come along the side of the body or extend out to the sides.

Lying on your back, bring the knees towards the chest. Let the knees and feet release to the righthand side of the floor as the arms extend outwards resting on the floor. If it is too hard to bring the legs to the floor and hold, you can place a blanket, pillow, or blocks underneath the legs. Repeat on the left hand side.

Like the Savasana practice for a deficient third chakra, the intention here is to allow yourself to practice just being as you are. Find a relaxing posture and support yourself with blocks, blankets, and bolsters if needed.

The navel chakra is responsible for empowerment. While it is possible for it to become out of balance, through yoga, meditation, and exercise, we can bring it back into harmony with the rest of the chakras.