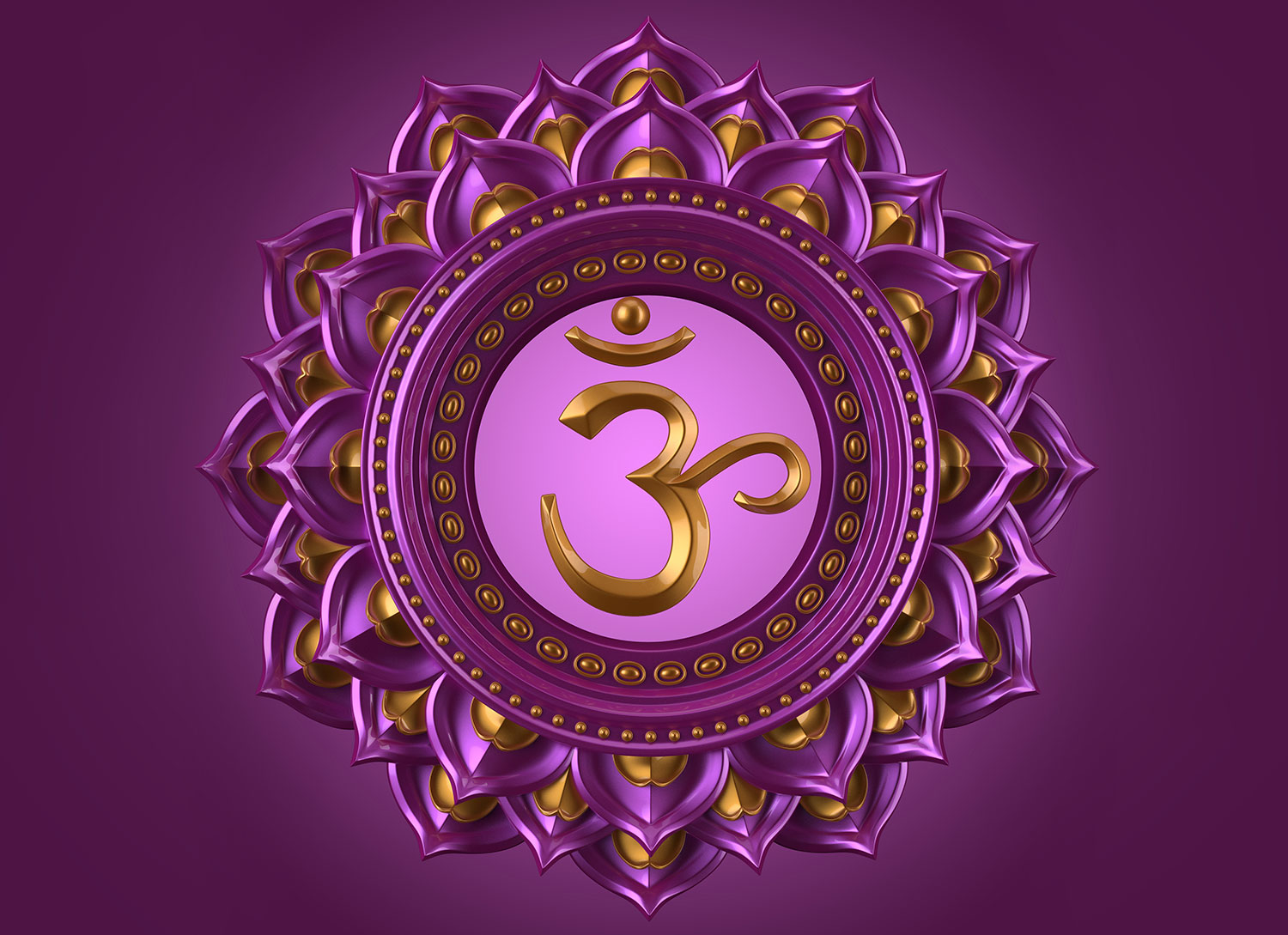 The crown chakra is powerful, it is where consciousness, knowledge, and truth are cultivated. It’s where we can let go of our human attachments and feel more connected to the divine. This is where we find meaning in our lives.

Kundalini is energy that is located at the base of the spine, it flows upward through the chakras and leads to an expanded state of consciousness. Kundalini remains dormant until someone realizes there is a higher state of purpose. Chakras are seven subtle energy centers that spin and are located in the spinal cord. Kundalini can be awakened through yoga, starting at the root chakra and moving upward through these wheels, absorbing their energy. To awaken the energy and for it to move upwards and downwards, chakras need tending to.

Overview of the Chakras

The first five chakras are associated with the elements (earth, water, fire, ether, and air). They are vitalized through prana and transform mental energy into spiritual energy. They affect our desires and moods depending on how we tend to them and spark their energy. Each chakra is depicted in the form of a lotus, centered around a yantra, and surrounded by a certain number of petals. A yantra literally translates into “machine” and is a combination of purposeful forms. You could think of each of these yantras as specific machines that have their own function to keep us operating well and interacting with others.

Each chakra has its own color. When looked at from the base of the spine upward form the colors of a rainbow. Additionally, they have their own seed sound known as bija mantra. These sounds when chanted are frequencies used to invoke energy in the body.

Located at the base of the spine, the Muladhara chakra is also known as the root chakra or first chakra and is related to the earth element. This chakra is related to our very basic needs: survival, security, grounding. Its’ seed sound is lam. Its color is red. The yantra within the lotus flower is a downward pointing arrow, The three points of the arrow has several meanings; the three aspects of consciousness (cognition, conation, and affection) the three modes of experience (knowing, doing, and feeling), and the three divinities (Brahma, Vishnu, and Shiva).

Orange and located near the navel it is also known as the sacral chakra or second chakra. It is responsible for our desire for pleasure, sensuality, and sensuality. Svadhishthana Chakra is associated with the water element. Its’ seed sound is vam. A circle with a crescent is its yantra representing the water and moon.

Located at the solar plexus, this bright yellow energy wheel is also known as the third chakra. This chakra is responsible for our power in the world, ignited by the fire element. Its’ bija mantra is ram. Its yantra is a red vibrant inverted triangle that moves energy downward and will obstruct the movement of Kundalini until it is pierced.

The fourth chakra, also known as the heart chakra beats at the heart center. This green energy center is associated with the air element. Anahata is responsible for love and compassion. Its mantra is yam. A six pointed star, consisting of two triangles, is its yantra. It moves energy upward and downward, with the upward triangle representing male energy, and the downward triangle is female energy. It represents harmony and balance.

The throat chakra, fifth chakra, is responsible for our truth in this world. This blue chakra is associated with ether. Its seed sound is ham. A crescent yantra is at the center of the lotus, with a white circle inside of it. It represents purity and knowledge.

Known as the third eye chakra, the sixth chakra is responsible for our intuition and awareness. Indigo in color, this is the command center of the elements. Seed sound could be Om or Aum. A circle with two petals is the yantra that represents the seed sounds.

The crown chakra is located at the top of the head and represents union and bliss.Its element is considered to be thought or consciousness. Some associate Om, Ah, or Soham with this chakra while others say silence is sufficient. Additionally, its color is considered to be violet or the purest white. Its yantra is a circle as a full moon.

To have a balanced crown chakra, the other chakras must not be ignored. Those who have a deficient root chakra, struggling to survive will not have the capacity to practice open-mindedness. If there is excess energy in the heart chakra, there will be too much attachment to get caught in worldly matters. While bliss is what we may all be aiming for a balanced approach to all chakras will keep the crown chakra in balance.

Located at the cerebral cortex, the crown chakra has several different names, Sahasrara,  Shuyna, and Nirlambapuri. According to Tantric scholar and writer Harish Johari , they translate into different meanings from thousand-petaled, void, or dwelling place without support. Its yantra is depicted as a full moon, surrounding one thousand petals, as a purple lotus.

When in balance, we are able to assimilate information. We are thoughtful, open-minded, spiritually connected, and experience wisdom and mastery. It helps us develop our education, maturity, spiritual connections, worldview development, and wholeness. For this chakra to remain in balance, we need spiritual freedom, intellectual stimulation, and some sort of spiritual practice. This chakra naturally is the last one to develop and starts forming in early adulthood and continues to grow throughout life.

If the crown chakra is deficient, the rising energy is blocked from ascending upward. It also prohibits kundalini from descending downward. When deficient, there is a disconnection from the spirit and we become close minded. Think of know it alls or people who need to be right all of the time. When deficient people have limiting beliefs, difficulty learning, or are skeptical of anything considered spiritual.

With all of the qualities associated with the crown chakra, it can seem strange that there is even the possibility for excess. However, the imbalance means that we are overly focused on this chakra or attributes and not aware of the lack of energy in other chakras. When in excess, there is an addiction to spirituality, gross intellect, and a disconnection from reality. There can also be dissociation from the body. People tend to feel overwhelmed by day to day living.

The crown chakra excess or deficiencies manifests in a variety of ways. It will be concentrated near the brain showing up as Amnesia, delusion, tumors in the bran, migraines, and even comas.

When trying to heal Sahasrara Chakra, we focus on trying to let go of the demands of outside sources, free ourselves from false beliefs, and connect with the divine.

The crown chakra deficiencies and excess show up in the brain so it is important to seek the help of medical professionals for severe imbalances or diagnoses. However, there are several practices that may work well for slight imbalances or work well in conjunction with other therapies.

There are many different meditation techniques. They can either stimulate, calm, or create clarity. Much like any form of physical exercise, the more you train the mind, the stronger it gets.

Before practicing, it could be helpful to set a timer for your practice. If you are new to meditation, you may want to try for something short like 2 minutes and gradually increase as you continue to practice.

— Start in a meditation position. There is no right or wrong way to sit in this practice. However, it is helpful to find a posture where you will not fall asleep or be uncomfortable or sit in pain. Any position where it is easy to breath and remain alert is perfectly fine . Possible sitting postures could be sitting in an easy seated pose or sukhasana, sitting upright in a chair, lying down (be careful about falling asleep), or sitting on a small cushion.

— Close the eyes or take a soft gaze towards a fixated point.

— Notice the breath, there is no need to change or control it. Become aware of nuances that exist. Things to observe could be the sound of the breath, where the air flows in the body, the length of the breath, or the spaces between the inhales and exhales. There is so much to notice. What we notice is less important than being aware of what is happening right now in the present moment.

— As your practice, it is normal for the mind to start drifting into the past, the future, thoughts, or emotions. Noticing that the mind has wandered isn’t a distraction but really a moment of awareness as soon as we realized we drifted elsewhere. When that happens, kindly bring you awareness back to the breath.

— Practice for as long as you want or however long you set your timer for.

Chakra meditations can help arouse the flow of Kundalini energy. It can help with mental modifications and emotional weather patterns. Meditation on the chakras should focus on the imagery that they are depicted by, the yantra, color, lotus flower, not the specific area of the body. You can practice meditations on all chakras or tune into one. For the crown chakra, you could practice the following meditation).

— Start by coming into a seated meditation pose. The hands should be on the lap with the palms facing upward.

— Let your breath become even as you close your eyes.

— Visualize the crown chakra: A lotus flower purple in color with a thousand petals with a circle of a full moon at the center.

— Imagine the petals opening with intense light. This light is divine energy with energy flowing downward to you through the chakra. Repeat the intention “I am forever walking in the light”.

— Imagine the light spiraling down your body along the spine.

— Tune into all five senses receiving the light imagining you are both receiving and are the light.

It could be helpful after practicing any of the meditations above to journal and reflect on your experience. The exercise isn’t meant to judge the meditation or have any sort of goal attached to it but just as a means to reflect. You may have your own way of journaling but if you’re not sure where to start, you could try this exercise:

— Set a timer for ten minutes.

— Continue writing or attempting until the timer goes off. You may find that the pauses are uncomfortable if you feel like you are done. You might be done but the space and silence might also allow you to have an openness to notice or receive other aspects of the experience that you may have missed.

The crown chakra is where we have the potential for bliss. By practicing keeping our chakras in balance, we can awaken Kundalni to get closer to consciousness.

Sacral Chakra: Everything Yo...